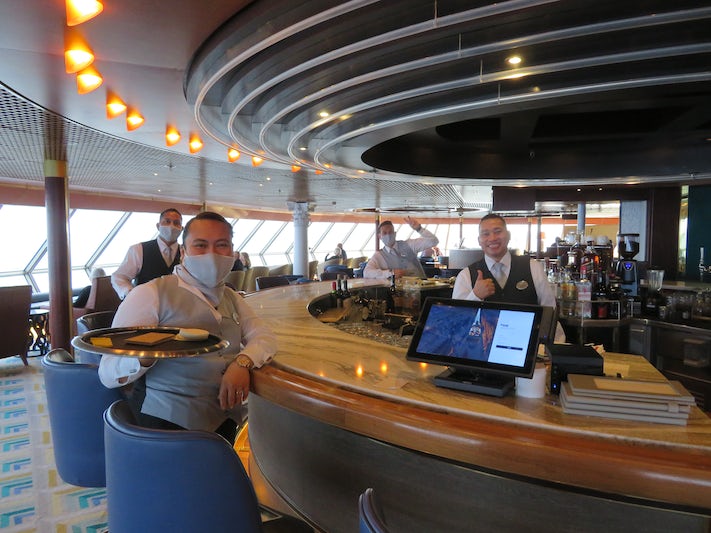 Comfortable and safe return to cruising

Handy Towne
10+ Cruises • Age 60s
We were wary of returning to cruising as it is a very different world to our last cruise in December 2019 but we came home, having thoroughly enjoyed the cruise and having felt safe throughout the 11 daýs - so much so that we have booked another cruise for December. You could ask for nothing more, from Fred Olsen, to reassure you over Covid protocols. We can all find faults and claim to have had ...
Read More

Fred Olsen not what it was

Review for Bolette to Mediterranean

jdohants
10+ Cruises • Age 70s
My wife and I started cruising over 20 years ago and our favourite line was Fred Olsen. No longer. Since Fred jr. took over, cruise prices doubled; there is far better value elsewhere. It cost us £56 on this cruise for the Maitre D' to tap a few keys on his computer to alter our dining time ( I have medical issues and cannot dine late ) A one litre bottle of water in the cabin costs a ridiculous ...
Read More

Just about acceptable - but badly managed and not very good value

feljen
10+ Cruises • Age 60s
This would have been an awkward cruise anyway - with reduced passenger numbers due to covid precautions and with half of the original destinations - most of those on the strength of which we'd originally booked this holiday - cancelled, plus an unfortunate breakdown and delay at Belfast further complicating schedules. What turned awkwardness into, at times, full-throated disaster was the ship's ...
Read More

A most relaxing and enjoyable cruise

Escapehelpme
2-5 Cruises • Age 60s
We had an amazing cruise with Fred Olsen family. The staff were very attentive and the service was excellent. The bathroom areas were kept immaculately clean. The ship only had 60% occupancy due to COVID-19 so it was more quiet than usual. There were plenty of activities which were I think were designed for the older cruise-goer. There were no children on board. We were in a basic cabin on the ...
Read More

A 'new' ship with a comfortingly familiar Fred Olsen experience

AdeAfloat
10+ Cruises • Age 70s
Like many others aboard, we were just happy to get back to sea after the lockdowns and eager to sample one of the new Fred ships. We were quite influenced by the stimulating social media presence that the company had achieved during the pandemic - sad though it may sound, the quizzes was one of the highlights of our week! We had travelled on P&O's Iona's maiden voyage a few days earlier which ...
Read More

pillock
10+ Cruises • Age 70s
rewards for oceans members appalling compared to previously: no fred olsen pens [surely this is a free advert when cruisers leave them around or lend them , miserable selection snacks as only reward for diamond oceans members [one between two!!]. guest entertainers very poor. tap dancers may be talented but who want to have to endure two shows of them. comedian OK but other musicians no one wants ...
Read More