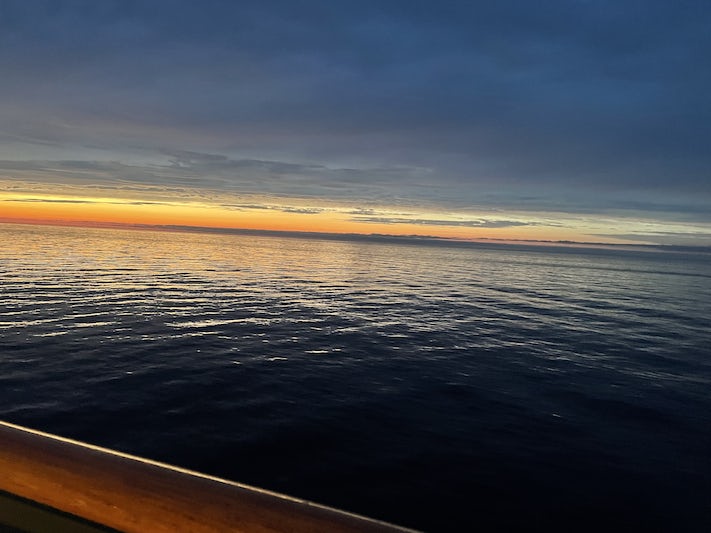 Sifi
10+ Cruises • Age 60s
Having cruised with a number of cruise lines ( Royal Caribbean , P & O and Oceania ) we were interested to see how Cunard compared , the fact a refit had occurred recently would be even better . We were expecting higher standards than RC and P & O but in our opinion the food was not as good in the main dining room . Most courses read well on the menu but were disappointing when they arrived . ...
Read More

Jossamund
10+ Cruises • Age 60s
Having previously cruised on the Queen Victoria and the Queen Elizabeth in 2013, I thought that I would 'complete the set' by joining the QM2 on the final leg of her 2016 World Cruise from Dubai to Southampton. How things have deteriorated in 3 years! My 2013 experience of Cunard was excellent service from friendly staff in all areas and excellent food - even during a Force 10 gale. Not ...
Read More

Maritrini
2-5 Cruises • Age 60s
We chose this cruise because it included the Suez Canal we had 2 nights in Dubai before the cruise and we were stopping in what we thought were fairly interesting ports ?? They weren't interesting at all for me ! The excursion to Jerusalem and Bethlehem were excruciatingly awful, too many people ( last days of the Passover ) the guide ! Well the less I say about her the better !! We had ...
Read More

Elena Gannett
10+ Cruises • Age 30s
Spent great vacation with my husband. We were really surprised with a very cleab comfortable cabin with a balcony. It was really nice to spend mornings with coffee breathing the fresh air. Lots of towels and toiletries in the bathroom. Nice food at Grill restourant for me but not for my husband. Comfortable table, polite staff. But i think they could have better menu. I can't ...
Read More

No rating
Most disappointing cruise ever

d.m-forster
6-10 Cruises • Age 60s
We were very much looking forward to our cruise from Southampton to Dubai, via the Mediterranean and Suez Canal. Ship was great, food and staff very good. However, due to dredging in the Suez Canal we waited for 18 hours before being allowed to enter, then we transmitted the canal completely through the night in the dark! This was obviously completely out of the captains control admittedly, but a ...
Read More

Arctic Cruise on QM 2 is Fabulous

Seacucumber
10+ Cruises • Age 110s
We left NY on August 5 from JFK and took Air France to Hamburg via Paris CDG Airport. We stayed one day in Hamburg at Holiday Inn Express St. Pauli which is very close to Hamburg historical Port and other city attractions. We boarded the ship from Hamburg, embarkation was fairly smooth the port was not crowded; it took us less than 30 minutes to board the ship. This is our 4th cruise on QM 2, ...
Read More

jack1444
10+ Cruises • Age 70s
As a previous reviewer said the marketing team need to experience the so called Queen Grill experience. We found the dining room to be poky and the maitre d totally unhelpful to one and all. We never sat on a table for 2 before (more than 12 cruises) where you could lean your elbows on the next table. When we challenged this we were told 'only the British want tables for 2.' As for the maitre d ...
Read More

Arthur Dent
6-10 Cruises • Age 60s
We have cruised for several years with P&O Oceana, Aurora and Ventura (Ventura big, creeks and plastic decks, never again) We wanted to test out Cunard with a view to a transatlantic in 2013, having been to all the ports on this trip before, apart from Valencia so we could concentrate on the ship. We had an outside Cabin on deck 5 with what is described as an "in hull" balcony,. Our check in at ...
Read More

cruzflyer
6-10 Cruises • Age 70s
We had an enjoyable 10-day cruise on the Queen Mary 2 sailing from Southampton to four ports on Cunard's "Iberian Highlights" itinerary -- Vigo, Lisbon, Valencia, and Barcelona. This was our first cruise on the QM2, and second on Cunard. We sailed on the Queen Victoria in January 2011 and found the contrasts interesting. For various reasons discussed shortly, we were more enamored with our ...
Read More

UrsulaE1
First Time Cruiser • Age 70s
It has always been our dream to travel on the Cunard ships , and this year we finally got our chance .  We booked the "Mediterranean Delights " voyage for 11 days out of Southampton on May 14 . We flew into Heathrow at 8.30 a.m. and were met by a Cunard representative at the airport . Our luggage was taken from us , and we didn't see it again until we were in our cabin . Nice touch ! A motorcoach ...
Read More