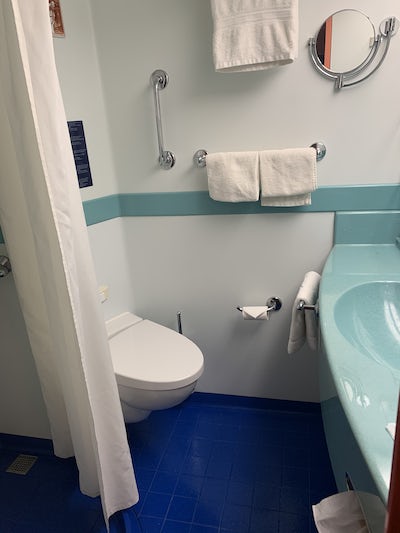 Think before you book

Anneeka
First Time Cruiser • Age 70s
The ship was beautiful BUT it was all money money money, if you are a vegetarian then don't go unless you want omelet as that was all I was offered, can't eat that for nearly a month, they really didn't want English passengers on board, it was my for ever dream to go on a cruise as had worked on ships and wanted to be the passenger, boy was I disappointed, I paid extra for a outside cabin with sea ...
Read More

Lisa1818
10+ Cruises • Age 60s
I dont know where to start about this cruise, this is my 15th cruise so I know what to expect. For our first dinner I had the spaghetti bolognese, this was the worse ever and not even warm, went to the Lido deck to have something to eat. Next morning the orange juice is watered down Tang, coffee so strong had to have hot water added and they brought it 10 minutes later so when added the coffee it ...
Read More

buck3647
First Time Cruiser • Age 70s
Just when I thought I was a seasoned cruiser I took this Costa Mediterannea out of Miami and what a shock I got. First let me say that my observations are not really to be critical just to alert others of an alternative cruising experience, you could say the phrase "You get what you pay for" could be tag line for this cruise. One thing nobody complained about was the price and the unique ...
Read More

overseasid
6-10 Cruises • Age 60s
We had been on Costa ships several times in the past and enjoyed the style & quality. We had actually cruised on this ship (COSTA MAGICA) 2 times in the past. Unfortunately, our experience with the latest cruise was absolutely terrible. It was especially disappointing as the COSTA MAGICA was the first cruise ship my wife and I experienced about 6 years ago. The comments below are only the most ...
Read More

jkwoods1
10+ Cruises • Age 70s
We have never been disappointed to this level in over 30 years of cruising. Starting with the food: First there were no ice tea or lemonade at the meal, which was a first for us and the 3 other couples with our group. Had to ask for ice, lemon and butter every night. It took 30-40 minutes to receive the first course and often not all 8 of us would receive our courses together. Often several of us ...
Read More

Asmilinwtch
10+ Cruises • Age 60s
We just returned from a 12 night Bahamas/Southern Caribbean cruise aboard the Costa Mediterranean. This was our first time on Costa even though we have cruised several times before. We booked on the 18th. Sail date was the 23rd. I had called Costa to book directly. When the agent gave me the price, I told him that it was $50 per person cheaper on another website for the same room. He said that was ...
Read More

chriskat3
10+ Cruises • Age 70s
Just returned from a 12 night cruise to So. Caribbean with the Mediterranea. My husband and I along with usually six other couples have been cruising for the past 15 years. This is the first cruise with Costa Cruises. The Mediterranea is a lovely ship and our balcony cabin was very comfortable that's where the positive ends. The food was mediocre with few choices and small portions. There was no ...
Read More

Costa Cruise NOT for Americans

Vetsurgeon
6-10 Cruises
We have cruised seven times, mostly Carnival lines. Although the food was better than most, as many other travelers have said, the service was not very friendly. We were most aggravated by the $11 a day per person we were charged automatically for "tips" that were not deserved or earned. No incentive for employees to do a good job. I prefer tipping myself so I know the employees get the money and ...
Read More

nms
6-10 Cruises • Age 50s
This was my first cruise with Costa and last as many others on that ship expressed. I cruised with Royal, Carnival and MSC before and never had a bad experience. My family is not picky but the service is awful except the cabinet steward who was so nice to me and the kids and the upgrade we received without asking to a balcony. The food is awful and the activities are limited. People at our table ...
Read More

Schnides
First Time Cruiser • Age 40s
It was apparent to us after a very short time on-board the Mediterranea that Costa are trying to claw back as much money as possible after the loss of the Concordia, through rigorous cutbacks in all areas of service. The food was average at best, and diabolical at worst. The communication with passengers on excursions was non-existent and on several occasions we would have been left behind or ...
Read More