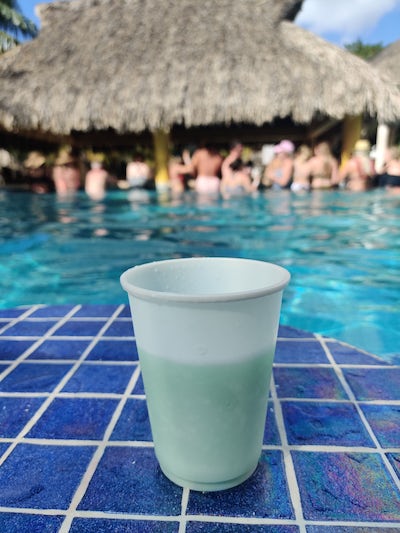 1-10 of 56 Charleston to the Eastern Caribbean Cruise Reviews

Mar152
First Time Cruiser • Age 50s
A friend of mine mentioned he and his wife were going to celebrate their 30th anniversity & my wife and me were coming up on our 25th anniversity. So we decided to surprise her and take our first time ever cruise to theBahamas. My friends had never met my wife prior to (Co workers). We planned to get her on board with out her knowing she was going on cruise. I had paid for it via a Walmart credit ...
Read More

tbbl
6-10 Cruises • Age 60s
Kenny G (piano) was EXCELLENT. I wish we could have seen him more often-entertainment-"so so" as far at]s the shows Motown and Brits...Comedians Cee Jay and Caroline falling down funny-can't wait to see them and Kenny G again. My only suggestion for the comedy show is move it into the Universe Lounge-the place they have it now is simply too small---The comedian/juggling show hilarious (Winfrey) ...
Read More

chavinat
First Time Cruiser • Age 30s
This was my first cruise, so I don’t have anything to compare it to, but I thought it was fantastic! Of course the pool is small, the décor is a little dated, but with a good attitude all of our expectations were exceeded. First get the FASTER TO THE FUN pass! We arrived at the Charleston port at 12:33 pm (they told us not to arrive before 12:30). We went to a special place to drop our bags, ...
Read More

Barneyg16*
2-5 Cruises • Age 80s
Been on several cruise lines. Carnival has been the worst. Disembarkations were confusing and disorganized.Getting out of the Charleston Port is an ordeal in it self (going and return). Food on the ship was terrible. Same food was in all the dinning areas. Worst coffee. Any information being given on the speaker system was too loud and individuals giving information was not understandable. ...
Read More

Fantasy 7 day of out Charleston

judagar
10+ Cruises • Age 60s
I agree with several other reviewers - if you're not expecting a 5 star cruise, you won't be disappointed. The Fantasy is and older ship and in some places it shows, however, when it was built it was considered super liner. Even though it's smaller than the mega ships, it still has the size to cruise smoothly. We went on a seven day cruise out of Charleston (we live in Raleigh, NC). The ...
Read More

cigarJ
First Time Cruiser • Age 40s
First I wanted to say to the comment below about over run by spring breakers??? Really, well that's just bad planning because most schools do take spring break in March!! We sailed out on March 21 2015. Just got back. We visited Grand Turk, Half Moon Cay, and Nassau. Grand Turk- Truly not amazing but we made it fun. We did not do an excursion because we wanted to have our own schedule and have a ...
Read More

kelly2509
2-5 Cruises
The main problem with Carnival's Fantasy is that it thinks it's 1975. The entertainment was music and comedians mired in that era of long ago. There is practically no internet access (unless you consider taking 10 minutes to download a few emails, at 75 cents per minute) and no daily news except the occasional CNN report on 12" TV in stateroom. If you want to keep in touch with your friends, ...
Read More

No rating
2nd sailing on the old Fantasy---Happy people love this ship!

tiggere
First Time Cruiser • Age 40s
Carnival's oldest and smallest ship. Writing about your miserable experience here would be like booking a Bed & Breakfast and complaining that it's not the Four Seasons. Perspective! If you have some, and a good attitude, you will have a fabulous time! We've been on 10 cruises on 6 cruise lines. We adore the Fantasy. We are on vacation!! What's not to love? The food, great. The staff, awesome. The ...
Read More

faycruise
2-5 Cruises • Age 60s
I want to try to follow some sort of order in this review so I will follow the guidelines; Background Information: This was our 4th Carnival Cruise, our 2nd on the Fantasy, we are from Fayetteville, NC and book our cruises through Carnival Direct. Hotel Information: We usually book a Park &Cruise, and this trip was no different. We stayed at the Home2Suites in North Charleston. $134.00 for the ...
Read More

peachycruiser
First Time Cruiser • Age 70s
This was our eighth cruise, having previously cruised on Carnival (2), Royal Caribbean(2), Holland America(2), and Princess(1).We chose this cruise solely because of the convenience of embarking in Charleston and not having to fly or drive far. There were seven of us in three OV cabins. I wasn't expecting great things but I wanted the new cruisers in our family to have a good time. We arrived in ...
Read More