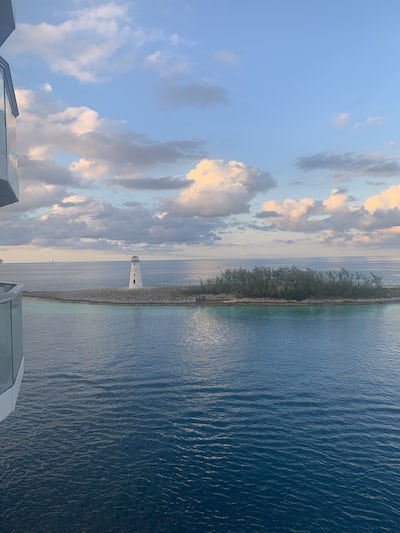 Singapore to Sydney on the farewell to Olympic Dining Room Cruise

THE DISABLED CRUISER
10+ Cruises • Age 40s
We wanted to dine in the beautiful Olympic dining room before it was removed from the ship at the end of it's repositioning to Vancouver BC, for dry docking. Apparently it will be moved into one of the new H class ships designed to supercede the popular Solstice class. This venue really should have been kept as it is very unique. Many people I spoke to aboard thought it was a bad idea remving ...
Read More

ralph45
2-5 Cruises • Age 70s
PROS Chose to cruise with Celebrity to compare it to previous cruises with P & O UK. Organisation of embarkation, disembarkation and tender situations were very efficiently handled. Found the ship to be extremely clean and well serviced by a extremely friendly and welcoming international crew. Food was of a high quality, especially the meats. Afternoon canapés in Concierge ...
Read More

Great ports, but lots of room for improvement on the Millennium

MillionMileFlyer
10+ Cruises • Age 70s
This was a second cruise on the Millennium and third overall on Celebrity. Ship itself was well maintained. We had a handicapped cabin, which meant there was a lot of extra space and we had a rear facing balcony which was great. Cabin crew was efficient and friendly. Entertainment was good, lots of local performers from Australia. We had room service breakfast several times on the balcony. Good, ...
Read More

sbkluvs2travel
10+ Cruises • Age 70s
We boarded the Millie for our cruise to Singapore from Sydney after having been on the Solstice for a week and were disappointed in the lack of updates especially since she had been in dry dock for engine repairs just a few months prior. The staff was mostly new and it took them more than a few days to realize that a smile and friendliness gets you a long way with the passengers. We had an ...
Read More

CruiseRSW
10+ Cruises • Age 70s
We have to agree with everything the previous people wrote about this cruise on board the Millenium from Sydney in November 2013. The itinery was fantastic but after having done thirty plus cruises with probably all their competitors we thought we would give Celebrity a try. Big mistake! Longest check in ever even though we were Concierge class it took hours. We have checked in at Sydney before ...
Read More

Fantastic ship- but a rip off and poor PR

BrownBear47
6-10 Cruises • Age 70s
My husband and I boarded the Celebrity Millennium on Nov 20th in Sydney(Australia) for a 17 day tour up the east coast of Australia then to Bali and Singapore. This was our second Celebrity cruise this year- the other on Celebrity Reflection for a tour of the Mediterranean. For the first (and last) time we chose an inside cabin. Although adequate there were a few "design" faults that annoyed me, ...
Read More

Surpass all others? I don't think so.

suttonbb
2-5 Cruises • Age 80s
We embarked at 4 pm on 2 November at Honolulu with departure scheduled for 11 pm. Luckily we did not try to embark earlier as other passengers told us that there was a total blockage at around 1 pm. Things went downhill from there. A suitcase was still missing at 10 pm when Emergency Drill was announced. The muster station shown on the cabin door was entirely different to that shown on our cabin ...
Read More

Majorstreetlord
10+ Cruises • Age 60s
This was our first Celebrity cruise & what a disappointment, we were always told that if RCL was 4 star, Celebrity was 5 star plus, definitely not the case, especially regarding the MIllennium. The ship is old, tired and lacked "soul" especially at night. We should have taken note of the negative reviews before we booked, but we wanted the itinery - mistake!. We started off in Sydney, with the ...
Read More

baldercash
10+ Cruises • Age 60s
This review covers the 2nd half of our bucket list and anniversary cruise on Millie. Honolulu Nov2nd to Sydney Nov20th to Singapore Dec7th. We changed our cabin on disembarkation day Nov 20th in Sydney, our friends moved a cabin as well which allowed us to have cabins on the aft of the ship side by side 11th deck AC1138 & AC1140. Our room transfer was seamless we had breakfast at the buffet and ...
Read More

clauspeter.schwarz
6-10 Cruises • Age 50s
We traveled on Celebrity Millennium in November 2013 from Sydney to Singapore. We had chosen the rear facing Cabin 8172. We were travelling with our five year old daughter. We - the parents - are mid forties and like it quiet with reasonable food, but not very formal an a daily base. We only have done six cruises so far. Many reviews made me nearly to NOT book this ship and cruiseline. I honestly ...
Read More

Find a Celebrity Millennium Cruise from $288