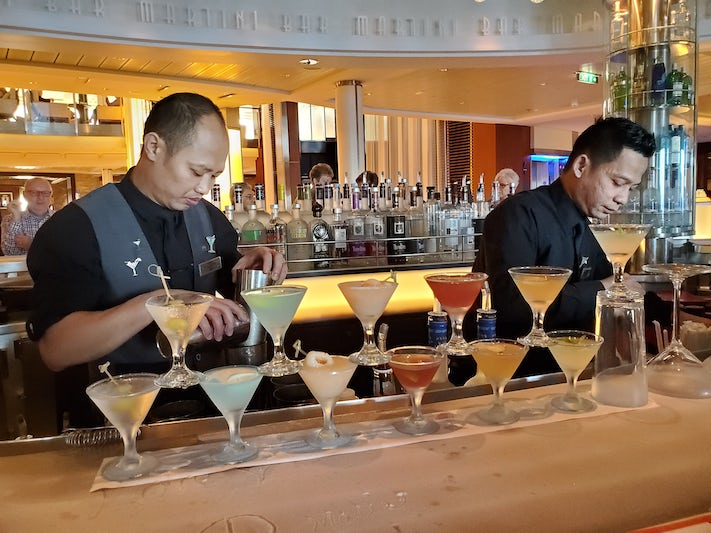 The Infinity is just average

We wanted a cruise of the Greek Islands and the Infinity has a wonderful itinerary to see the islands as well as Israel. The ports of call were exactly what we were looking for. Israel was a very good stop and if anyone were to ask me I would say Israel is very safe and well worth visiting. It was the itinerary that brought us to Infinity. I have sailed two other Celebrity ships the Summit ...
Read More

Fine trip but a few blips

We chose this cruise because we had a credit from a previous Celebrity Cruise where we had a problem. I liked the itinerary and despite some negative reviews about the Infinity we decided to go for it. All in all I thought it was a fine trip. Embarkation went very smoothly and we enjoyed the Concierge special lunch. Althought the ship was far from new it was not a dump. There were some ...
Read More

Post cruise review survey asked NOTHING about what could be improved

Over all the ship is average. Lame lecture circuit.. here we are in the middle of history, Jerusalem, Bethlehem, Rhodes, Malta....you would think a guest lecturer would put some spin of the past, but NO.. the only speaker missed the mark.. had several lectures on how to talk to your dog. Yes. And the turkey is on for the next cruise, too. He is a “ringer”, no way could you get this gig without ...
Read More

The stateroom was chosen on our previous cruise using Celebrity future cruise . We were meticulous in choosing the cabin. It was A1 Aqua. 1124 . The constellation dry docked in March 2017 and added a movie theatre on deck twelve right above this stateroom. Which was NOT shown on the deck plans when we booked . The noise from the movie theatre is incesant you cannot sit on your balcony without ...
Read More

I wanted to go to Israel for many years and this cruise offered 2 ports and an overnight. Celebrity Constellation offered this itinerary. WE had sailed on the Connie twice before. The ship has always been well maintained. It is an attractive ship inside and out. The service from the crew - amazing. Our cabin was a balcony forward this time. I really enjoyed the spectacular views from it. Our ...
Read More

First but not last cruise with Celebrity. Have cruised before on MSC and decided to try Celebrity. Got a good deal and booked balcony cabin. Cabin is nice. Yes, you can see that it is not new, but everything is working fine and it was spotless clean.Balcony was great. We were in 7180, which had a much larger balcony than others. Location was great, in aft satrboard side and with cabins over ...
Read More

BLU Restaurant and unfriendly staff on the ship

BLU restaurant - Poor foods and menu selection are limited, and very ... very slow service, We need at least 2 to 2 1/2 hour to finish a meal !!!! Very disappointed !!!! Some days we rather go to the Oceanview restaurant to have our dinner just to save time and better foods. Our Aqua class cabin was clean and nice, the stateroom attendant was friendly and professional. The staff at the ...
Read More

My wife said Celebrity had best service. IT FAILED big time. Chose this cruise for Israel ports. Aqua class=waste of money. Cabin same size. Private dining room had poor amount of servers-35 tables 5 servers. Menu left a lot to be desired. Not compatible with the added cost for the cabin. Rarely extraordinary selection. Most as found in casual restaurants. Items listed on menus only ...
Read More

We booked this cruise very late and got an amazing last minute deal . We had been on the Connie only 2 cruises (see other review) prior to this one and had a great time. This was a different cruise in that it was a re-positioning cruise and so was primarily sea days (5 in a row at one point) whereas on our other cruise we had 6 port days in a row. The main thing that did not change was the ...
Read More

F1 Cruise with a Trip through the Suez Canal

Review for Celebrity Constellation to Trans-Ocean

I wanted to see the final race of the f1 season in Abu Dhabi via the Suez canal.Just a couple of things off my bucket list. First night was at a hotel in Athens,because of the bombs in Turkey,so far so good,it seems like I am being looked after.taxi outside with my name being held up,I felt a tad important,taxi driver was very polite spoke good English and dropped me at the hotel front ...
Read More