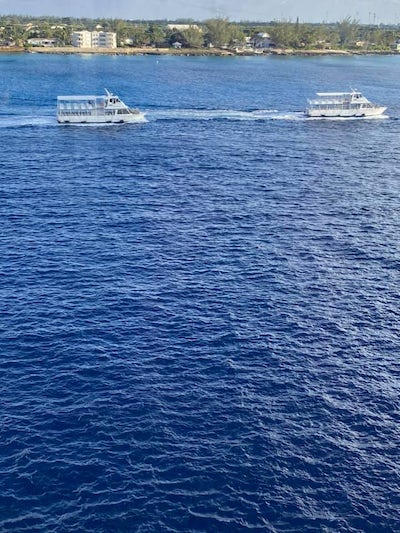 Soooie Pig
2-5 Cruises • Age 60s
I want to see the Caribbean and we enjoyed the Cruise but the ship was just like the Carnival Spirit, same design and all so that was disappointing. Some staff were excellent other not so much, our first waiter could have cared less about our wants and needs so we changed tables at Dinner and they things became more enjoyable. The Ports were great except we didn't get to port in Honduras, it was ...
Read More

Okay cruise for the money.

Awood279
First Time Cruiser • Age 40s
Stayed in deck 6 midship, with extended balcony. Ship had recently been refurbished, however I didn't really see signs of this. One lamp shade had tremendous amounts of stain, the bath smelled foul, the wallpaper in the halls was torn and beaten by luggage, and the mural in the main atrium had a huge, drooping, rip midway up. The bed was super comfy, as was the pillow. It was nice to have shower ...
Read More

ael123
10+ Cruises • Age 60s
We got a balcony guarantee for two that cost less than $1420 including all taxes, port charges and had an extended balcony so we feel we got a little more than we paid for. That being said... The lines the lines- I hated the buffet lines. The food was not bad but it was institutional. Frozen vegetables, not fresh. Desserts were a little less than average in quality. Nothing seemed fresh baked. ...
Read More

Lying about time at ports - last time we ever cruise Carnival

amymcadoo
6-10 Cruises • Age 40s
Carnival has started to mess with the times at port. They are no longer changing the "ship time" to the local port time. For example, we were supposed to be in Belize from 8:00am - 4:00pm, however the actual time we were there was 6:00am - 2:00pm local time. Nothing in Belize was open that early, including the tender boats! We didn't get to the port until 9:30am ship time (7:30am Belize time) and ...
Read More

MsNudist
6-10 Cruises • Age 50s
This is our review of the Legend. We arrived in Tampa about 10:30 am. We used a parking service about a mile away for parking called Premier. It was a prepay at $7.50 a day. They quickly got us over to the pier and we began the embarkation process. We were in group 2. We were held up getting on the ship until after noon due to customs and immigration and muster training for employees. We left the ...
Read More

guyfromconcord
6-10 Cruises • Age 80s
We are HAL and Celebrity veterans and were a little anxious about carnival, but chose them becuz of itinerary, etc. I booked 4 cabins for 6 adults and 3 grandkids ranging from 15-21. We booked balconies and later upgraded to suites for a fee offered by carnival right before the cruise. We were all very surprised and impressed with the service, food, cleanliness and friendliness of the staff. the ...
Read More

Lizzystjohn
10+ Cruises • Age 80s
No directions to our suite. No on board champagne. We're in 4 lounges. And no bar staff ever took our order. Had to go to bar. Ship is very gaudy. Really over the top with Japanese like decor plus Grecian urns all around. No glass of champagne at captains party. Got 1$ off drinks. Buffet is very limited. Only one station changes daily. Deli had no roast beef. Drinks very expensive and ...
Read More

Wonderful cruise on the LEGEND

Sleepless141
2-5 Cruises • Age 40s
Just returned from a 7 day cruise on the LEGEND. It was 2nd cruise for DH and myself. This time we took our 3 teenage sons who are 15, 16 and 19. We were with about 12 other people from my family and we were part of a group of 40 going from my hometown. We drove down to Tampa the day before our cruise was to start. Stayed at a Holiday Inn Express in Rocky Point which was very clean and nice. ...
Read More

Great time on the Legend

pattyk13
2-5 Cruises • Age 50s
We've sailed on Royal Caribbean as well. In some ways it was obvious that Carnival is the cheaper option, buffets aren't always available, the entertainment was a little hokey, and the cruise director seemed most interested in getting us to buy things. However, the food was much better than Royal and our cabin was bigger even though we had a balcony on Royal (interior this time). I liked ...
Read More

Legendary experience on the Legend

HenanSan
10+ Cruises • Age 60s
From the beginning I did not know what to expect. First, the PVP at Carnival tried to get me to switch to another ship out of MIA going to the same ports saying it would be nicer, but since we had never been to Tampa I stuck with my first choice (but I wondered if she knew something I needed to know). Second, several reviews were not too flattering of the ship and/or service but since we have ...
Read More

Find a Carnival Legend Cruise from $334