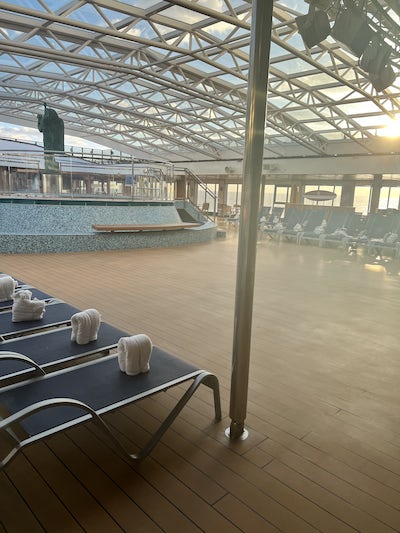 Sal33
2-5 Cruises • Age 50s
We need a break from work and everyday life. It's a nice ship staff very polite room service was great we had haur as are room attendance left beautiful towel animals on our bed everyday.Was very disgusted that there was no tea or coffee in room. When asked just got told we don't do that. Well as l said to the lady at the service desk ever other cruise ship we have been on has tea and coffee in ...
Read More

daliman11
2-5 Cruises • Age 50s
This was our 3rd cruise. Once on Carnival Magic and once on Celebrity Reflection. Travelled with 2 adults and 3 teenagers in two balcony cabins. Also went with my sister's family and my parents (10 people in all). THIS IS THE BEST SHIP IF YOU HAVE KIDS! Embarking and disembarking was smooth and easy. The Ship The ship décor reminded me of Medieval Times. Not to everyone's taste but I ...
Read More

Nuala Swerine
First Time Cruiser • Age 50s
We chose this cruise on recommendation by friends. The checking in process was easy and flowed very well. We were quickly settled in and the fun began. The staff were just excellent. The entertainment on board was super and we hardly saw our three boys except at breakfast and dinner. That's saying a lot cos without wifi they would always be generally bored and complain as all teenagers do! So not ...
Read More

chellelh
2-5 Cruises • Age 40s
This was our 3rd Carnival cruise, with the first 2 cruises on the Spirit. The Legend was the same ship as the Spirit, so we knew what to expect. Again, the ship was in fantastic condition, great food and lovely staff. In previous cruises we sailed with family and friends, but this time it was just our family of 5, which was a lovely time together. We had an interconnecting balcony ...
Read More

Mostly Good with Some Disappointing Experiences

Nomad2504
6-10 Cruises • Age 50s
Our group of 9 (2 families with teenage kids) cruised on the Legend on the New Year Cruise to New Zealand's North Island. Positives: 1. Overall the staff were great. Mostly eastern European, Philipino and Indonesian crew were invariably polite and quick with a smile and a hello. They genuinely appeared warm and friendly despite being away from their own families for 6 to 8 months at a time. ...
Read More

AngelaO
First Time Cruiser • Age 60s
Our first cruise and we are not impressed. Drinks were too expensive we even had to pay for our drinking water in our cabin, average entertainment, most uniformed officers (except for Manuel, Eric and the Captain) ignored us and other guests. Most of the time we were sick due to the rough seas. We were hoping the ship would have had better stabilisers to not feel the motion of the waves. On ...
Read More

skywil
6-10 Cruises • Age 30s
First of all and up front - my long term partner left me while I was on this cruise, so i'll do my best to not let that get in the way of the review. The good: Jen Baxter - The Cruise Director. After many many cruises across several lines, Jen is a stand out. Her quick wit and sense of humour manages to balance that all too difficult line between appropriate and inappropriate with ...
Read More

Not a trivia buff

steveO53
6-10 Cruises • Age 60s
A 19 day cruise ..a long time to be on a cruise ......the ship and staff and food was as god as the other cruises I have been on . ( p+o royal carribean ) . But most of the activities and entertainment was so so, if you like trivia you will be in heaven .They even stopped a band playing to a full house after 5 songs in the red frog pub to do a trivia , 60 % of the people walked out. The ...
Read More

Thank God it was only 4 days

franky9752
6-10 Cruises • Age 50s
Expected Better from Carnival . I have been on Princess Cruises several times before AAA++ and wanted to try a different cruise line. Had a Group of 18 . Where to start , Boarding Ok except for the Wine being taken off us on embarkation no big deal but still on Princess you can bring one bottle per person. Buffett layout is horrible compared to other ships and food in buffett is average. Pizza ...
Read More

3littlepigs
6-10 Cruises • Age 60s
We are just off the Tassie 4 day sailing. I was warned about the unattractive decor but still got a shock. It is brutally, eye blisteringly ugly. I read a review that described it as having being decorated by a Colombian drug lord with no taste, unlimited funds and an obsession with Ancient Greece...that sums it up pretty well but it was still a shock. Think 1970's Las Vegas and you will get ...
Read More

Find a Carnival Legend Cruise from $549