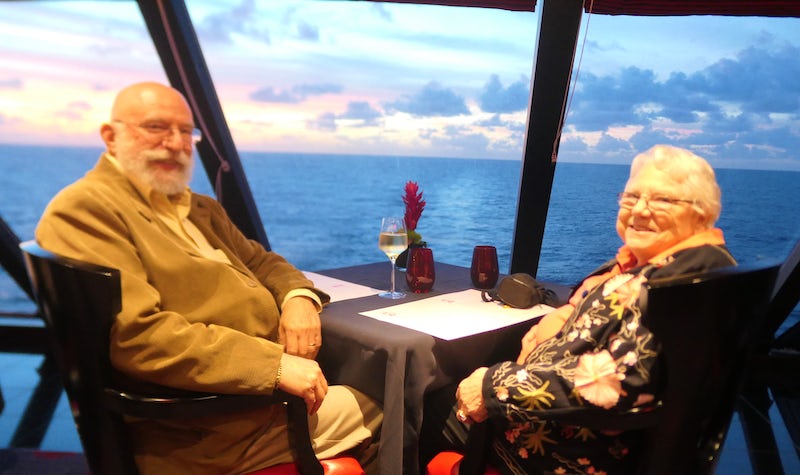 Great ship but not for us

Nlmmack
6-10 Cruises • Age 60s
We selected the Oceania Sirena because of timing for our 4 back to back European cruises. Over on the QM2, then Viking, then Oceania. The Oceania Sirena is a beautiful jewel box of a ship, just beautiful. The cabin was small for a concierge verandah, bathroom was ridiculous. Saw many guests going to the spa in bathrobes to shower daily. Linens and bed wonderful. After paying $13k for a cruise on ...
Read More

GoSeeDo2
10+ Cruises • Age 60s
We chose this cruise for the itinerary. We did private party excursions at most of the stops. We very seldom will take the overpriced cruise line excursions. Most of the stops were places that we had not been. Yes, the rooms were small, but it's a small ship. We liked the size of the ship. This was our first time on the "R" class. We were in a concierge class veranda. We liked the location on ...
Read More

henknannie
6-10 Cruises • Age 70s
We picked this Oceania cruise because of its itinerary, in particular Al Hambra, Canary Islands and Tangiers (among others). We were lucky to score stateroom 6004 (port side very near the sharp end), which whilst having no balcony, had instead added interior space, making for a larger cabin. We appreciated the extra space as we were travelling for 2 months and had lots of luggage. Sirena has ...
Read More

Loved sailing the Med with our family

PoppyA
10+ Cruises • Age 80s
Loved the Ports! There were 11 of us. All our family. Had a wonderful time, the kids are teenagers and enjoyed, St. Tropez and Ibiza. We had great dinners at the restaurants, and the help was fabulous. With the exception of the Vista Suite my wife and I had taken, it was wonderful. We were over the thrusters and the anchor and it was miserable early morning awakened by the noise of coming ...
Read More

CancunCaptain
2-5 Cruises • Age 60s
My wife and I were very happy with our cruise! The food and staff were excellent; the entertainment was better than I had expected and the ports of call were outstanding with very enjoyable tours and excursions. Actual Embarkation took only a few minutes and we were in the room after a nice lunch and a short wait. Very pleased. The ship is in overall very good shape after the refurbishment. ...
Read More

SLO2HI
2-5 Cruises • Age 70s
We chose this cruise because of the itinerary. I have been to Spain and Portugal but always wanted to visit Morocco. We booked late and couldn't get the cabin we wanted so only had a window rather than veranda; our travel agent convinced us that we would be in port enough that the room wouldn't be an issue. She also lauded this cruise line and talked up the food. Well........wrong! The room was ...
Read More

Sirena, a lot less than expected.

Seawatch1
10+ Cruises • Age 80s
We booked this cruise as a result of an excellent previous Oceania cruise (on Riviera) and corporate publicity for their 'new' ship. I will endeavour to be honest and truthful with regard to my comments and facts. The company Oceania (now owned by Norwegian Cruise Lines NCL) recently purchased this ship from Princess Cruise Lines where it had two names, Tahitian Princess and Ocean Princess. ...
Read More

caseywasey
10+ Cruises • Age 70s
chose this cruise for the places it was visiting, food in Red Ginger was excellent, the Steak House was marginal would have eaten at Red Ginger more often but they told us they are sold out the day of boarding...hmmm. cabin stewart Victoria was outstanding, nice that we could bring our own wine aboard, nice that in some ports they had shuttle buses to and from town,nice that all soda and ...
Read More

Our Best Ocean Cruise Ever

winform
6-10 Cruises • Age 70s
Inaugural cruise of Sirena and we sailed on Marina last year. The service on arrival was excellent although it was obvious much needed to be finished, they were still painting sections when we left 14 dats later. Our bed head arrived after day three. Of more concern was the sewerage system which failed on and off throughout the voyage. These were minor difficulties though and even though we were ...
Read More

lis1407
10+ Cruises • Age 70s
Was this inaugural voyage cruise interesting? Yes and no..... yes because.. Christening Ceremony is probably a once in a livetime event. Several special gifts.... With J. Pepin and Claudine abord,you can expect some excellent food,and they delivered it,for the time the Pepin's were abord ( 2 may ? ) after that date there were some hits and misses. No because... This ship was ...
Read More