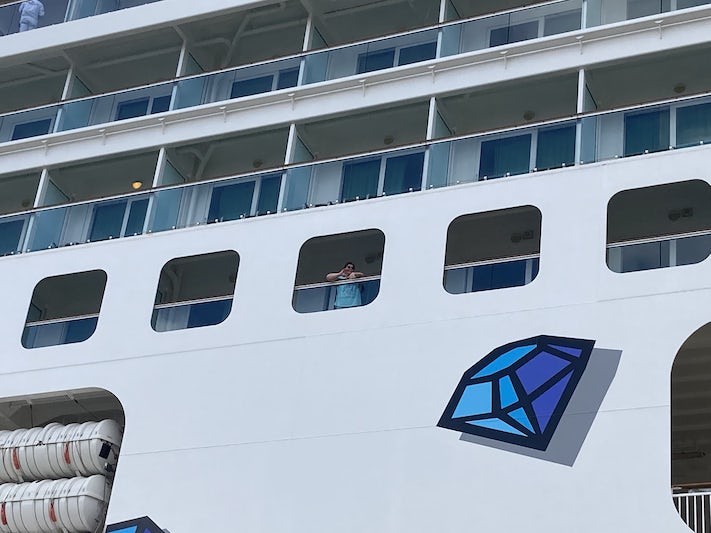 rosey1946
First Time Cruiser • Age 70s
This was our 10th NCL cruise and first trans-atlantic crossing. The cruise left from Barcelona and we flew in a day early from NYC to be well rested before boarding the ship. Really did very little in Barcelona but roam Las Ramblas for awhile and the Barri. Went to the famous market and had the best ice cream ever. The embarcation was the easiest we have had. We were led to the latitudes area ...
Read More

Overall C- Food not worthy of a review but I gave it one.

tonytt76
First Time Cruiser • Age 40s
Overall C- About us: My wife and I are around 30 and took our 2 year old daughter This was our 4th cruises so far, all exclusively with NCL. It had been 4 years between our last cruise and this one. We have been on the Majesty twice and the Sea. Embarkation: A Went through the security checkpoint and got in line for check in. We had gotten in early and waited for the staff to open check ...
Read More

belleretraite
First Time Cruiser • Age 70s
We decided to use the opportunity of the low cost of cruising in 2009 by booking 4 different cruises on 4 different cruise lines in the Mediterranea in November and December. It took a lot a research,but finally we booked consecutive cruises on the Costa Victoria,the MSC Splendida,the Azamara Quest and the NCL Gem. Even though at first sight these ships seem to fall in different categories,the ...
Read More

Guria
First Time Cruiser • Age 40s
Service: great, no complaints. Our steward, Michael, was s sweet. On the first day we asked for 2 extra towels and he made sure we had extra towels every day. He was always around, and was glad to help us in every way possible. The servers at the Italian Restaurant were also very nice, we had a great time dining there. And I can't forget to mention the "washy washy" guy at the Garden Cafe. It was ...
Read More

Just back on the Gem -- and just booked the Gem again!

FlipperGal
First Time Cruiser • Age 70s
Just back on the GEM- and have just booked the GEM again! We loved the NCL GEM on its Nov. 8 '09 W. Mediterranean sailing -- and have booked it again for its Jan. 24 '10 Caribbean sailing from NYC. That should say something! NCL: The Nov. 8 sailing was our 6th NCL cruise in the past 4 years, and our 3rd NCL cruise this year. Obviously we enjoy cruising (though we do independent land ...
Read More

scuba14u
First Time Cruiser
Food and Service: Food Quality was generally Average to poor. Hot food was served cold most of the time. Critical food items such as sauces and meats were just warm. This concerns me cause bacteria can build at warm temperatures. Portions were very small food was bland and at times disgusting. The service staff for the most part were not trained. Service was slow to no existent at times. ...
Read More

The Western Mediterranean on Fast Forward

ttmannin
First Time Cruiser • Age 70s
One couple traveled from the US to meet the other three couples in the UK for our flight to Barcelona, where we had booked the two-day pre-cruise package. Our British Airways flight to Barcelona was delayed an hour when a already checked-in family misplaced a child, frighteningly not located by the flight time. The general mood on the plane was of sympathy with the parents and concern, and the ...
Read More

mokincaid
First Time Cruiser • Age 60s
First of all. When we booked the cruise in April, we were assured that we would be getting the best possible pricing. WRONG. We noticed several price reductions. When we contacted our cruise rep we were given an upgrade to ocean view partially obstructed. More like lifeboat view, completely obstructed. The only time we could see the ocean was when the boats were being used as tenders. The flight ...
Read More

Tons of Research - Gem was a Ht

dillardr
First Time Cruiser
After months of research, looking for a vacation for a group of 11 family members that included teenagers and senior citizens, we decided on the Gem. My wife and I have sailed on Princess, RCCI and our favorite, Holland America and were a little concerned about the reviews of NCL. Here is the good and bad as honest as I can be. GEM - Beautiful ship, we were in a AE suite(aft) and it was great. ...
Read More

Had a great week, but service was truly lacking

xiphoid76
First Time Cruiser • Age 40s
Overall, the vacation was fantastic, but I have to admit I was not impressed at all with NCL and will likely not sail with them again. Embarkation was fairly easy, they had to send us to 3 different lines because their key cards were not working, but it did not take that long and we were on board in under 30 minutes - very nice. The ship is very nice and very clean. I liked the layout of the ...
Read More

Find a Norwegian Gem Cruise from $319