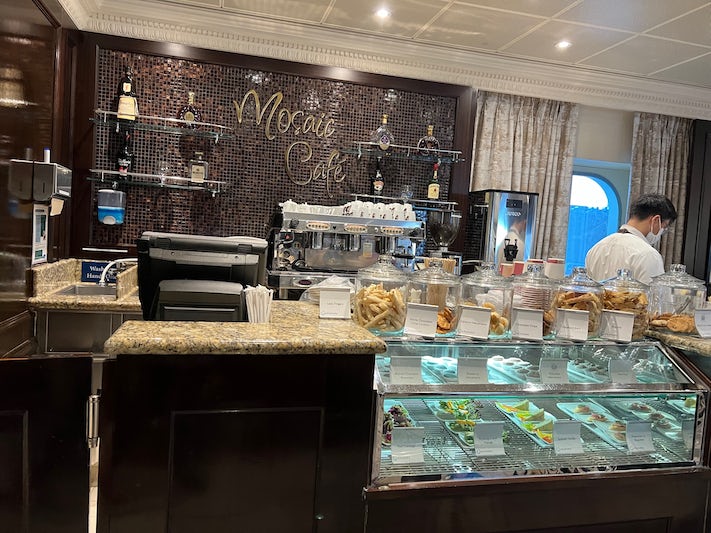 First time on Azamara, probably not the last.

stanjs
10+ Cruises • Age 70s
We chose Azamara and this itinerary based on the recommendation of friends who did it a couple of years. ago. We too weren't notified of the change of embarkation point, but noticed the ship in the "wrong port" the night before from the roof top bar of our hotel. Sailing on smaller ships is a great experience. More attention from crew and an altogether sense of community familiarity that ...
Read More

Pumper1961
10+ Cruises • Age 60s
chose for the ports to include NZ and Oz. over 15 nights 5 shows were fairly good, but the 10 others were dire. They use a company called level 54 who are shocking. many nights the audience only numbered about 30 out of 650+ passengers on board which pretty much sums it up. The tv films in the cabin were very old (eg under a tuscan sky) and went on repeat in the 2nd week which is ...
Read More

tillytara
6-10 Cruises • Age 60s
We booked a back to back cruise on the Quest after enjoying a great cruise with Azamara from Singapore to Mumbai 2 years ago. We departed from Auckland on the 21.2.19 in a Club Ocean suite 7005. We were really impressed with the ground staff at the terminal who were very helpful and were able to board the ship quickly. Our room was ready with a welcome bottle of Fizz. Once again it was ...
Read More

Hi Tillytara, thank you for the lovely 5-star review of the Azamara Quest. That's interesting about your acupressure session. We look forward to welcoming you and your husband back aboard...

dive4pam
10+ Cruises • Age 60s
Itinerary is what counts and long port stays as well as Quest being a ship we sailed on previously. We love overnights in port so we have longer time in port. We use our ship as a hotel. We don't really care about casinos, shopping or entertainment on board. I want a lovely cabin, great bed and nice common areas. Having said that, the Quest is in need of an overhaul. I was shocked at the ...
Read More

Durmandurman
10+ Cruises • Age 60s
One of the reasons on deciding to do this cruise starting in Auckland was to meet up with a relative who emigrated to New Zealand back in the 70s. Mission accomplished! On the itinerary, there were several ports in Eastern Australia which we had not previously visited and by sailing back-to-back it afforded us the opportunity to explore ports within Indonesia, and revisit Singapore. Despite ...
Read More

flydc
10+ Cruises • Age 50s
We sailed for 14 days from Sydney to Auckland. There was a lot of confusion about which port we would depart from Sydney. Was very confusing up until almost the last minute as the original plan seemed to have been the Overseas Cruise Terminal - located near Circular Quay at the Rocks. Instead we left from White Bay Cruise Terminal. (Apparently they've had alot of confusion as we later learned that ...
Read More

Back on the Quest

jkadventures
10+ Cruises • Age 60s
Recently back from my second Azamara voyage, both on the Quest. Overall this Sydney to Auckland cruise was excellent with some notable improvements, however there are areas which continue to disappoint. On the positive side, I found the ship to be spotless and the crew genuinely friendly. Most notable was the main restaurant, Discoveries. I was greeted with a friendly smile and often assigned ...
Read More

PLeb
6-10 Cruises • Age 70s
We wanted to see as much as possible of New Zealand without having to brave driving on the wrong side of NZ's notoriously twisty - and sometimes hazardous - highways. As this was our second Azamara cruise, we knew we could expect matchless service, an impeccable ship, a (relatively) spacious cabin and great food. There were no disappointments in any of those areas. However ... 1. While we ...
Read More

hobbitons
6-10 Cruises • Age 50s
After cruising Regent and Seabourn we were looking for a more casual experience coupled with an in-depth itinerary of New Zealand, and Azamara fit the bill. Itinerary included Melbourne,Tasmania and the North and South Islands in New Zealand. We were lucky enough to have great weather in Milford Sound and Captain Magnus did a great job navigating the ship. We loved the genuinely friendly crew, ...
Read More

Thank you for the cruise review, hobbitons. And thank you for booking another Azamara cruise. We appreciate your loyalty!...

kc925trvler
10+ Cruises • Age 50s
Sydney Harbor for NY Eve reason for trip. Supposed to see fireworks from ship, docked at White Bay - poor dockage - back view of bridge, lack of transportation to/from. Bought an overpriced NY Eve party at the zoo. It was awful, to their credit, I received a full refund - that can't cancel out an event of a lifetime. Shore excursions cancelled, private transfer booked (shore excursions person ...
Read More

Find an Azamara Quest Cruise from $1,119