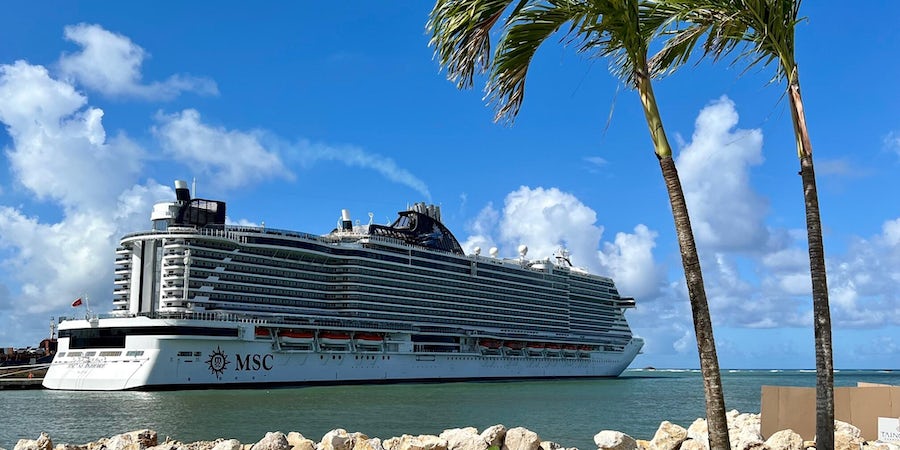 Can an almost brand-new cruise ship capable of carrying 5,632-passengers leaving from the heart of Miami be considered a secret?

Judging from my current Caribbean cruise on MSC Seashore, the newest ship from MSC Cruises, I'd say yes.

And that's a shame, because after a few days onboard, it's obvious that MSC Cruises' offerings in the United States keep getting better.

Gone are some of the problems that plagued the line in its early days of operation in the United Statees, like the lengthy waits for service in the dining rooms. Coffee is offered after meals, and the staff onboard couldn't be more cheerful, friendly or accommodating. The ship's activities and contemporary vibe are accessible for Americans, while still drawing on MSC's international passenger base.

And if you book yourself into the MSC Yacht Club, the line's ship-within-a-ship suite experience, you're really in for a treat. MSC shines in the Yacht Club, and MSC Seashore has the largest suite facilities yet, with a complex that includes its own lounge, restaurant and exclusive sun deck with a pool and whirlpool.

When you're in the Yacht Club, you legitimately don't have to leave, except to use your drink package and spa thermal suite -- both included in your fare. When you do leave the Yacht Club enclave, your butler will almost insist on escorting you.

But you'll want to, if only to explore the full range of what MSC Seashore, the line's first Seaside EVO-class ship, has to offer. It's only in Miami through the fall, when it will transition to Brazil; the almost-identical sibling MSC Seascape will take its place in late 2022.

There's no getting around the fact that a February 2022 Caribbean cruise on MSC Seashore feels a bit empty. It is.

Only 1,070 people are onboard our sailing. While the Yacht Club has a higher percentage of its suites full -- 55% -- there are times when you look around and wonder, 'Where is everybody?'

The answer: Back in Europe or their home countries, according to Yannis Kazalis, MSC Seashore's hotel director. The omicron surge in December and January kept international tourists at home -- a blow for MSC, where typically half of the passengers onboard are non-American. (The company eventually hopes that its U.S.-based ships will have a ratio of 80 percent American and 20 percent international passengers, Kazalis said.)

In the coming weeks, passenger numbers will go up. By the second week of March when Spring Break and St. Patrick's Day collide, 3,300 passengers are projected to be onboard, which will bring the ship slightly over half capacity. On a ship this size, that will still feel very manageable.

MSC has also opted into the CDC's new voluntary guidelines, which could allow them to relax the mask rules onboard. For our sailing, masking was the rule in public places and even required at events outdoors, such as the silent disco on the pool deck.

What Kazalis hopes doesn't change is MSC's policy of having passengers undergo rapid COVID-19 antigen testing at the port. That second test, coupled with a requirement of a negative test taken a few days in advance, has been key to keeping MSC Seashore sailing with healthy crew, Kazalis said.

"Slowly things are becoming more flexible," he said. "Now it's time to restart, with baby steps."

Not As Much Partying, But Still Great for Date Night -- And Families, Too

With so few people onboard, the MSC late-night culture that we experienced on the line's ships before the pandemic has evolved into a quieter date-night feel.

That's ok, as long as you are with the right people. Instead of closing down the disco with hard-partying friends, we're having leisurely meals at the specialty restaurants (a definite step above the main dining room, food-wise). Trivia and games still go on, with less competition but perhaps more camaraderie since there are so few of you. The fitness center is huge, as is the thermal suite; discounts on the latter often take place on port days.

The shows in both the main theater and the outstanding new venue -- the French-themed, deep maroon 400-person lounge Cabaret Rouge -- are quirky and entertaining, able to appeal to those with English as a second language. This is the most diverse cruise we've been on in a long time; you'll hear a multitude of languages as you walk through the ship at night.

One thing that works about the ship is that the spaces feel intimate. MSC Seashore has four smaller main dining rooms as opposed to one large one, similar to what you'd find on Celebrity's Edge-class ships. On our sailing, two are open – and yet they still don't feel full. Specialty dining packages have been selling well, Kazalis said. We've tried two so far, Kaito Teppanyaki and Ocean Cay seafood, and both were outstanding.

Families are still welcome and encouraged on MSC Seashore. The ship has six pools are spread out around the ship, as well as a separate pirate-themed waterpark area that draws kids. The Doremi Club on MSC Seashore is the largest in the fleet. Our sailing had 128 passengers under 18, about 12 percent, and that's likely to increase in the summer.

And if you're not in the mood for children, the infinity pool at the back of Deck 8 is an adults-only area, with chill lounge-style background music and an ideal view of both the ocean and condo-like towers that make up the MSC Seashore aft. It's also a popular place for bikini-clad selfies, judging by what we saw on our first sea day.

Some of the quirks Cruise Critic noticed when the ship launched in the U.S. in November seem to have sorted themselves out. The WiFi is fast enough to stream Peloton classes on your phone. We were able to stay well connected with work and family through iMessage and social media (although video calls are not guaranteed).

Our MSC for Me wristband worked to access the MSC Yacht Club, open our cabin door and order drinks throughout the ship. We were also readily able to access the MSC app to check schedules and reserve shows (although our butler would have preferred to do that for us).

Speaking of butlers, our outstanding experience in the MSC Yacht Club so far begs the question: Is the upgrade to suite life worth it? Our answer is yes, if you can afford it. The sheer amount of real estate on the ship dedicated to the Yacht Club on MSC Seashore truly makes it a sanctuary once the crowds return. While we like to do things ourselves, we admit that we're getting spoiled by having instant butler and concierge service.

One aspect of Yacht Club life that we didn't expect we'd like: it's more social in here. With the masks and lower crowds onboard, you're with your own party most of the time when you go around the ship. Bar stools are still roped off and patrons aren't encouraged to mingle.

The only place where we've really talked to other passengers, other than on our excursion, has been over drinks in the Yacht Club lounge. It's something we've all been craving during the pandemic, it seems, judging from the sheer amount of people who showed up for the Yacht Club cocktail party.

Everyone just wants to feel normal.

After a cold few months in the Northeast, everyone also wants to feel warm. And this Caribbean itinerary, which included not just one but two days at MSC's private island Ocean Cay MSC Marine Reserve, has certainly delivered. We've been blessed with sun so far, and believe me, we're taking it all in.

For people who want to do and see everything in port, now is a difficult time to cruise. We noticed fewer excursions on offer now than before the pandemic and that's directly due to lower passenger numbers. On Ocean Cay MSC Marine Reserve -- the line's private island in the Bahamas -- this is noticeable in fewer guided snorkel and kayak trips, although you're welcome to rent equipment and explore on your own. Nassau typically has lots on offer, but on this trip, we're noticing a prevalence of beach break excursions.

Kazalis said that excursions remain popular; in Puerto Plata, 61% of the ship's passengers took a company-sponsored tour. That's great revenue for the line, although as a privately owned cruise line that's supported by a larger shipping arm, MSC Cruises doesn't have the same financial scrutiny by Wall Street as some of the others. The line is already the third largest in the world, and with two newbuilds coming this year and more next year, MSC is only continuing to grow.

One improvement concerning excursions: If you're vaccinated, you no longer have to take an excursion to explore most ports while unvaccinated travelers -- primarily families -- have to stick with a ship's bubble excursions. While we took an excursion in the Dominican Republic's Puerto Plata, we intend to explore Nassau at our leisure, vaccine card in hard.

But honestly, we're not on this Caribbean cruise to do much of anything, other than relax (well, I'm working; my husband is the one taking it easy). It seems that's what our fellow passengers are chasing too. We've met English honeymooners, adult sons with their wives and moms, a couple from chilly New Hampshire who booked a back-to-back and intends to come back in another few weeks.

They are the ones who first called MSC Seashore one of Caribbean cruising's best secrets, as we watched the chef at Kaito Teppanyaki put on a show. The room only had a few diners, but the restaurant staff gave it their all, complete with corny jokes and flying egg. A round of applause came when someone caught it. We were told often how happy they were to have us onboard.

So far with a few days in, I agree. MSC Seashore has been the best cruise surprise I've had in a while. Give me the sun, give me the pampering, give me a chance not to think for a while.

After all the ups and downs that the pandemic has thrown us in the past two years, it's something we all deserve.