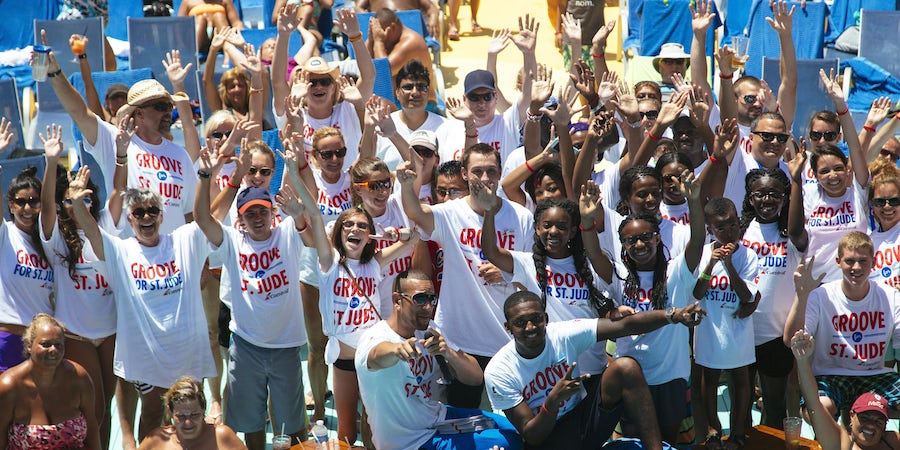 Cruise Voluntourism: Ways to Give Back at Sea

How would you feel about volunteering during your next cruise vacation? Several cruise lines offer programs to help you find that feel-good sweet spot where you're having fun on your trip, while also taking a bit of time to pitch in to aid the people, animals and conservation efforts in ports that need it most.

Voluntourism, a longtime travel industry niche, has risen in popularity in recent years as a way for travelers to give back and make a difference in the communities they visit. The effort has increasingly spread to cruises, where itineraries offer charitable initiatives onboard and excursions with an eye toward volunteering in port (like helping to build schools, teaching English to local schoolchildren or cleaning up beaches).

If you are looking to add a few good deeds to your next voyage, there are a wide variety of ways to partake in cruise-based voluntourism -- even if you don't want to dedicate your whole vacation to that purpose. Here are some of the latest philanthropic offerings from ship to shore.

Volunteer activities can be done as part of specially branded shore excursions on several cruise lines, with especially well-developed initiatives in place on Carnival Corporation ships and Crystal Cruises.Alternatively, passengers can seek out their own volunteer opportunities while in port, or sync up with a group such as Hope Floats, a nonprofit company that helps connect cruise passengers who want to volunteer independently with Caribbean-based branches of charitable organizations like the Red Cross, Salvation Army or The Humane Society (in Antigua; Barbados; Belize; Cozumel, Mexico; Nassau, Bahamas; St. Lucia; St. Thomas; and Tortola).

Carnival Corporation: Carnival Corporation's short-lived social impact-themed cruise line, Fathom, debuted in 2016 to offer Dominican Republic and Cuba cruises with a voluntourism slant, but ceased operations in 2017. However, the spirit of the venture lives on through the line's various cruise line arms.

Related: What Is Voluntourism on a Cruise?

Princess has most fully absorbed the heart of the Fathom brand via its 2018-debuted series of Travel Deep Caribbean sailings from Fort Lauderdale on Crown Princess (a program that may be expanded to other Carnival Corporation brands in the future). These itineraries afford group participants a chance to connect and care for local Caribbean communities through activities like donation drops, beach cleanups, tree plantings, school visits and assistance with home builds for hurricane victims, along with special dinners and programming back onboard.

Holland America Line: Holland America has offered shoreside volunteer activities for nearly a decade via a program called Cruise with Purpose. The specially themed excursions are available in ports in Latin America (Nicaragua, Panama, Costa Rica, Mexico), Europe (Portugal, Croatia), the Caribbean (Dominican Republic), Australia and the U.S. (Alaska). Sign up to visit with schoolchildren in Nicaragua, or assist a marine scientist team gather info on the humpback whales of Alaska on an outing aboard a research vessel.

Depending on the itinerary, excursion opportunities might include assisting animals in Alaska or Germany; visiting children's charities and organizations in Brazil, South Africa or Fiji; or pitching in on land conservation projects in Oregon, Australia or New Zealand. Aiming to be topical, a 2018-launched excursion in Hilo, Hawaii, assists community efforts to provide food, supplies and emergency housing to victims of the Kilauea volcano eruption.

As part of the sea-day event, participants are asked to make donations of $20 each to join in a noncompetitive 5K walk around the decks of the ship. For the donation, passengers get T-shirts and wristbands and are treated to a reception after the event.

More than 500 "On Deck for a Cause" events are planned annually across the HAL fleet, and the program has raised nearly $6 million since its inception in 2006.

Royal Caribbean's Walk for Sea Turtles: Royal Caribbean International raises funds for its partnering organization, the World Wildlife Fund, across its fleet. Cruisers can purchase special fundraising items in the gift shop (including a T-shirt or plush sea turtle or panda), with all proceeds going toward the WWF and its ocean conservation efforts.

Or, guests can sign up for the Walk for Sea Turtles, a charity walk around the pool deck, and on longer sailings, an additional Swim for Sea Turtles event in the pool, for a set donation per person.

Related: Give Back With Purpose Excursions on Carnival Cruise Line

Carnival's Care to Play: Carnival operates the Care to Play fundraising campaign onboard all of its ships for St. Jude Children's Research Hospital, which helps children with cancer. The campaign, according to Carnival, has already raised $16 million through a range of activities.

For instance, cruisers can purchase special desserts onboard with proceeds going to St. Jude, though the most popular activity welcomes participants to donate $10 to participate in the fun, cruise director-led Groove for St. Jude on-deck dance party.

Some organizations and travel agencies partially charter out cruise ships for the purpose of charity-driven theme cruises. By participating, you're ensured that a good portion of the proceeds (from both cruise fares booked and onboard fundraising initiatives) go toward supporting the highlighted organization. In some instances, the cruise line will additionally donate per stateroom booked and/or offer complimentary items or activities (like bridge or galley tours) that can be auctioned off to help raise funds. A few examples:

Buckeye Cruise for Cancer: The Urban and Shelley Meyer Fund for Cancer Research hosts an annual Buckeye Cruise for Cancer featuring more than 30 former Buckeye (aka Ohio State) players onboard, with whom cruisers can interact via events like a special Buckeye Spectacular Show, hosted auctions and autograph sessions. Since the cruise began sailing aboard Royal Caribbean ships in 2008, it's raised more than $18 million in the fight against all types of cancer (including $3 million from the 2018 sailing alone).

Sail for Tails: Funds raised via the annual Sail for Tails cruise go toward the efforts of Snippet Citrus, a Florida-based pet-spaying/neutering nonprofit. Launched in 2017, the fundraising cruise, held aboard Royal Caribbean ships, has featured activities such as lectures on pet care, animal shelter visits, scavenger hunts and trivia games.

Cruises have been offered since 2011 (first with Royal Caribbean and more recently, with Celebrity Cruises), and typically include a slate of automobile-related events such as special automobile expert talks, "drag racing" at sea (with Hot Wheels toy cars) and model car building.