You may also like
Dismiss
Tips for Safe Travels Following Terrorist Attacks
10 Facts You Might Not Know About Working on a Cruise Ship
CSMART: 15 Cool Things You Didn't Know About Carnival Corp.'s Maritime Crew Training System
Amazon River Cruise Safety: What You Need to Know
Is It Safe to Cruise the Nile River?
6 Ways LGBTQ Cruisers Can Stay Safe on a Port Stop in Jamaica
Decommissioned and Abandoned Cruise Ships: What Happens When They Retire to the Cruise Ship Graveyard?
Weaving 'Herstory': Q&A With the History-Making International Women's Day Cruise's Female Officers on Celebrity Edge
How to Keep Your Data Safe When Cruising
Why Germ-Zapping Robots and AI Technology Could Be the Future For Cruise Ships 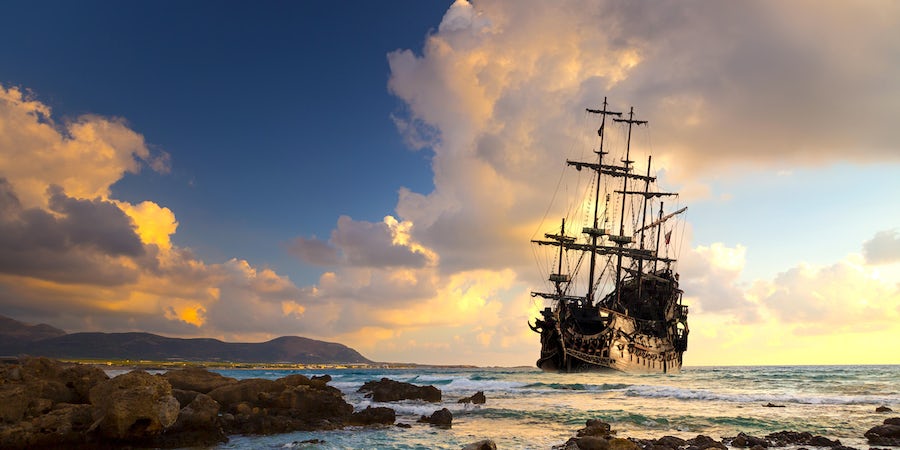 Pirates Then and Now: Could Pirates Attack My Cruise Ship? (Photo: proslgn/Shutterstock)

Pirates Then and Now: Could Pirates Attack My Cruise Ship?

Never has there been a yawning void in pirate attacks on the seas, but pirate activity has slowed a bit in recent years. Gone are the Blackbeards, Captain Kidds and other one-eyed, hook-handed robbers who plundered ships of yore. Instead the role has been filled by angry young men carrying guns, rifles, grenades and missiles. Supposedly, these pirates seek to act as modern-day Robin Hoods, distributing wealth from the hands of the rich to those of the poor by capturing vessels and holding onboard personnel for ransom. Whether or not the poor ever see a dime is unknown.

Still, pirates today evoke the same fears as they did in ancient times. And they strike often -- far more often than most realize. It wasn't until the early 2000s that we were made aware of their efforts to attack cruise ships.

Though the majority of concerns currently pertain to the Gulf of Aden, pirates can strike almost anywhere, at any time. Other hot zones include Asia (particularly in the Strait of Malacca between Malaysia and Singapore), the Somali Coast and the Amazon River. Piracy warnings are also meted out in parts of the Red Sea and along both the eastern and northeastern coasts of Africa.

But it's important to know this: Cruise lines have prepared for many challenging scenarios, and ships are well-equipped to handle situations when pirates attack cruise ships.

What Are Pirates, and How Do They Differ From Terrorists?

What's the difference between an act of terrorism and piracy? According to international law, it is a crime of piracy when an act is committed within international waters and, thereby, outside the territorial jurisdiction of any given nation.

Related: What Is a Cruise to Nowhere, and Why Aren't They Allowed From U.S. Homeports?

But there's another distinction between piracy and terrorism. Piracy takes place when the motive is strictly for financial gain; pirates try to board ships with the intention of robbing them or holding the crew or passengers hostage for ransom. Precisely speaking, when an attack is for religious or political gain, the term terrorism is widely used. Pirates do attack cargo vessels and oil tankers, so its only natural to wonder: If you're on a cruise ship that passes through the Gulf of Aden (or other high-risk areas), what is the likelihood that pirates will attack?

In more than a decade, there have been only six reported incidents of pirates attempting to attack cruise ships, and the most recent was more than four years ago already.

Compared to the sheer quantity of cruise and commercial ships moving through this area -- and based on the fact that incidents impacting cargo vessels and oil tankers are clearly more common -- these six incidents do not make as big of a splash.

How Do Cruise Ships Protect Themselves From Pirate Attacks?

You're never going to hear too much from cruise lines about their tactics involving pirate security. Aside from the obvious "Why tip your hand to criminals?" rationale, one reason is that there are no official regulations with which lines must comply.

Although there are no laws on the books to force shipping company compliance, the International Maritime Organization (IMO) does suggest tactics, techniques and technologies that offer interesting tips for pirate-attack evasion. For instance:

When it comes to piracy, ships are prepared for defense in a number of ways. On any given sailing, whether in known piracy waters or not, ships monitor movement in the area. Some cruise lines even contract with maritime information, research and tracking companies like Lloyd's Miu; Orbcomm, Inc.; or Global Marine Networks, LLC. These organizations keep ship owners abreast of happenings at sea. They also have the complete ability to track vessels and can show any change in planned itineraries or signs of distress. Other efforts by cruise lines to protect vessels and passengers include vigilant lookouts by officers and crew members for suspicious movement in the water, as well as consistent viewing of surveillance cameras. Bright spotlights are used for lookouts on dark nights and to help ship officials spot approaching boats. All of this occurs even when pirates are not sighted, and passengers are rarely, if ever, aware of these tactics, although many of those who have sailed through the Gulf of Aden attest to the use of minimal lighting.

Actually being approached by pirates requires a whole other range of tactics. The most obvious is a "full-speed ahead" strategy. But, captains will also conduct evasive maneuvers with the vessel -- like when Seabourn's captain created a zigzag pattern to thwart its attack -- while crew members assist in the use of fire hoses and other onboard defense devices to divert the perpetrators from boarding.

Related: Nude Cruises: 11 Questions We All Have

The behind-the-scenes training that officers and crew receive is intense. Piracy attacks and terrorist attacks are treated equally. The lines of communication between ships, office personnel and government authorities are constantly open. Regular crew members go through weekly drills for safety purposes, while trained experts are contracted to be onboard in case of an approach.

These contractors are trained by their respective companies and bring that training onboard. Each crew member has role to play in an emergency. Just as there are updated information and training programs for fire safety and weather precautions, there are always updated classes on operating new devices and technologies.

Certainly, most will go through their careers at sea without ever needing to use that training and knowledge -- but most is not all.

Are There People Who Specialize in Dealing With Pirate Attacks?

Crew members are trained to act in an emergency, but little is publicized about the actual security crew that all ships employ.

Most of them have had serious defense training, and usually some of that comes from military experience. Often, they're sourced from the Philippines, Nepal, Israel and South Africa, and they are already well trained before they even step onboard.

One Israeli officer, who did not want to be identified, told us that his military training -- which began at age 18 in unsafe areas of his country -- enabled him to prepare for any scenario, as he had already seen the worst in people. He shared one anecdote:

"I was walking the deck one night, while sailing the Malacca Straits, and heard a slap and banging sound along the ship's side. Walking toward the sound, I found a skiff that had successfully hooked a rope on the aft railing. When one of the attackers spotted me, he started shooting. Members of our security team immediately started throwing heavy objects at them. They also called for backup. The others arrived within minutes and started shooting back at the unexpected pirates, who had avoided the thrown objects up to that point. Dodging bullets was another story, and security held them at bay. The total event took 20 minutes to end."

What Else Should I Know About Cruise Ship Pirate Attacks?

Although the mere possibility of a pirate attack on a cruise ship makes us shiver, it's still far more common that they'll set sights on the more lucrative cargo industry, as they have done in the past.

That said, some support is available for ship operators cruising in troubled waterways. The United States, France, Germany, the U.K. and other countries have beefed up security for cruise ships (as well as cargo vessels) around the busier areas. They often work together to keep ships safe; it's more common now to see ships cruising through the Gulf of Aden, for instance, in a convoy of other vessels with protection at both ends. There is safety in numbers. Navies from various nations, as well as NATO and the European Union have all shared in the patrolling duties.

To find a complete list of areas to avoid, check with the consulate offices or websites of countries to which you're interested in traveling, or visit the