You may also like
Dismiss
A Disney Cruise for Adults: 9 Things to Know When You Cruise Without Kids
Where to Find Your Favorite Characters on a Cruise
Disney Cruise vs. Carnival Cruise
8 Best Ways to Cure a Cruise Hangover
8 Things You'll Love About Celebrity Edge
6 Best Magnetic Hooks and Door Magnets for a Cruise
9 Reasons to Get Excited About Marella Cruises' Marella Explorer 2
6 Cruise Memories That Will Warm Your Heart
Short Cruises on Queen Elizabeth: 10 Things You Need to Know
48 Hours in Brisbane Before or After a Cruise 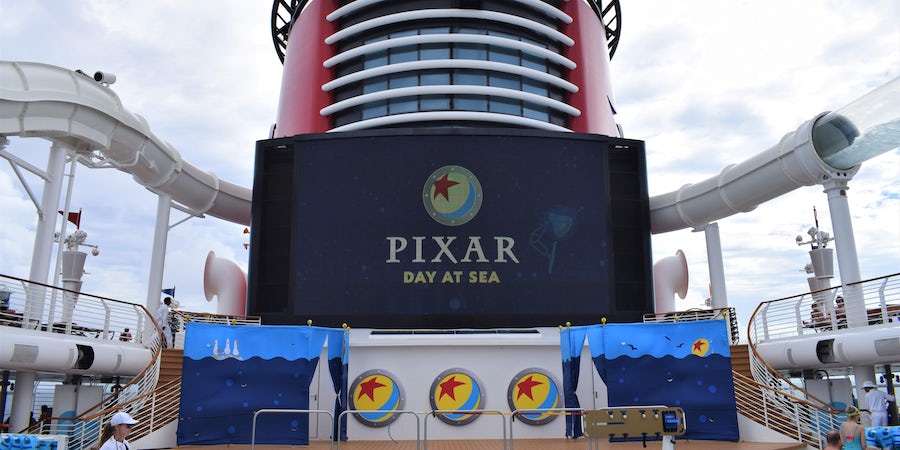 5 Things You’ll Love about a Pixar Day at Sea Cruise: Just Back From Disney Fantasy

Does the mention of "you’ve got a friend in me" make you hum? Love Pixar films like "Toy Story," "Monsters, Inc.", "Ratatouille", "Up", "Coco", and "The Incredibles"?  Then roundup your family and check out the brand-new Pixar Day at Sea special sailings on Disney Fantasy.

Denise Case, Director of Entertainment/Creative for Disney Cruise Line, said they worked for three years in conjunction with Pixar Studios to create this new day at sea. (As a refresher, other Disney days at sea include Star Wars and Marvel themes).

"You can never put enough joy in the world," Case said, making sure to do just that, with the embodiment of Joy (the character from "Inside Out") on a Disney ship in deck parties, meet & greets, and more.

After sailing on the inaugural voyage of this special cruise, we have five reasons why Disney Cruise Line’s Pixar Day at Sea may be just the vacation for you.

In Pixar’s “Ratatouille” Remy the rat proclaimed, “if you are what you eat, then I only want to eat the good stuff.” Disney Cruise Line’s culinary team created plenty of good stuff on this trip.

Our favorite was the Hey Howdy Breakfast with Woody and Friends. This interactive breakfast character show features Woody, the rootinest, tootinest cowboy from the “Toy Story” films. In addition, there’s Jessie the yodeling cowgirl, Bullseye (he’s Woody’s horse), and cowboy guitarists to get your hands clappin’ and feet stompin’. Fixins’ include hearty breakfast fare such as biscuits & gravy, burritos, eggs, bacon, pancakes, waffles, etc., but the musical moments with Woody’s Roundup Gang are the stars. We loved this breakfast, and it set the stage for the rest of the Pixar Day at Sea festivities.

Finally, the Sweet on You ice cream parlor had special treats inspired by Pixar films. There was a Joyful Lemon Cupcake, Toy Story Letter Blocks, Edna Marshmallow Stick, and more. There was also a Num Num Cookie that would be delicious slightly warmed with a scoop of gelato on top.

Pixar Day at Sea was not all about dancing characters and special food. During the afternoon, a seminar-style talk was offered in the Buena Vista Theatre. Pixar Storytellers at Sea gave passengers the opportunity to meet the artists behind the studios’ celebrated movies.

On the inaugural sailing, Bob Peterson, Pixar animator, writer, director, and voice actor shared stories from his career. The hour flew by as he showed home movies of his childhood, talked about his college education in mechanical engineering, and reflected on his work at Pixar from the very beginning with the original "Toy Story" in 1995. Peterson had the crowd in stitches as he demonstrated the voices for famous Pixar characters such as Roz (Monsters, Inc.), Mr. Ray (Finding Nemo), and Dug (the dog from Up).

This was truly a cruise highlight, and a Pixar experience geared specifically towards adults. There is a special guest from Pixar Studios scheduled to attend each of the Pixar Day at Sea cruises.

You’ve Got Friends at Sea

On "Pixar Day," guests could find many characters (some never seen before) all throughout the ship from 9:00am to 10:00pm. Miguel (Coco) met outside the Walt Disney Theatre. Joy & Sadness (Inside Out) posed before a colorful backdrop. Mike & Sulley (Monsters, Inc.) waved from the atrium balcony. Remy (Ratatouille) stood before a huge copy of Gusteau’s “Anyone Can Cook!” cookbook. Even Mickey & Minnie donned special Pixar-themed outfits for the day. Some characters, Woody & Bo (Toy Story) and The Incredibles needed special reservations to insure everyone had a chance to meet them.

Then, at 7:00pm, all the characters from gathered on the top deck for the Pixar Pals Celebration party. This gave everyone a chance to see their Pixar friends gathered together during a fun, high energy, dance party that was TOTALLY WICKED!

A second deck party at 10:00pm capped Pixar Day at Sea with "An Incredible Deck Party: Celebrate the Supers." Where Mr. Incredible, Mrs. Incredible, and Frozone appeared to receive an award until baby Jack-Jack was discovered running loose on the ship. Once Jack-Jack was safely recovered, the festivities ended with a fireworks finale set to "The Incredibles" score.

Disney was the first cruise line to offer fireworks at sea, and fans of pyrotechnic displays get not one, but two, fireworks shows during the Pixar Day at Sea sailings. In addition to The Incredibles fireworks, Disney Cruise Line’s signature Pirates IN the Caribbean party also takes place during a different night of the cruise. Guests don their rogue finest and join in with the pirate festivities on deck. The evening concludes with the Buccaneer Blast fireworks finale backed by Hans Zimmer’s rousing "Pirates of the Caribbean" theme music. If you missed the fireworks during the Incredible Deck Party, you have a second chance to catch the fireworks at sea on Pirate Night.

Everything Included with Regular 7-Night Cruise

Pixar Day at Sea takes place on just one day of Disney Fantasy’s 7-night itinerary. Departing from Port Canaveral, Florida, Disney Fantasy sails to ports in the eastern and western Caribbean. All of the normal Disney Cruise amenities are still included.

During our sailing we stopped at Tortola, British Virgin Islands; San Juan, Puerto Rico; and Disney’s private island Castaway Cay in the Bahamas. In the evening we could enjoy three Broadway-style shows in the lush 1000+ seat Walt Disney Theatre including: Disney's Aladdin – A Musical Spectacular, Frozen – A Musical Spectacular, and Disney’s Believe. Plus, you enjoy Disney Cruise Line’s signature rotational dining where the wait staff follows you to each of three on board restaurants Animator’s Palate, Enchanted Garden, and Royal Court. We also enjoyed a dinner and brunch at the adult-exclusive restaurant Palo (for an extra fee). All of this (except Palo) was included with the regular Disney Fantasy sailing, and the Pixar Day at Sea festivities were a bonus for no extra fee.

In 2023, Pixar Day at Sea is offered on nine select Disney Fantasy cruises between January and March. At this time, we do not know if Pixar Day at Sea will be extended beyond 2023 but based on the guest response to the inaugural sailing I’d say things are looking "Up" for a renewal.

Have you sailed on Disney Fantasy? Write a review about your experience!