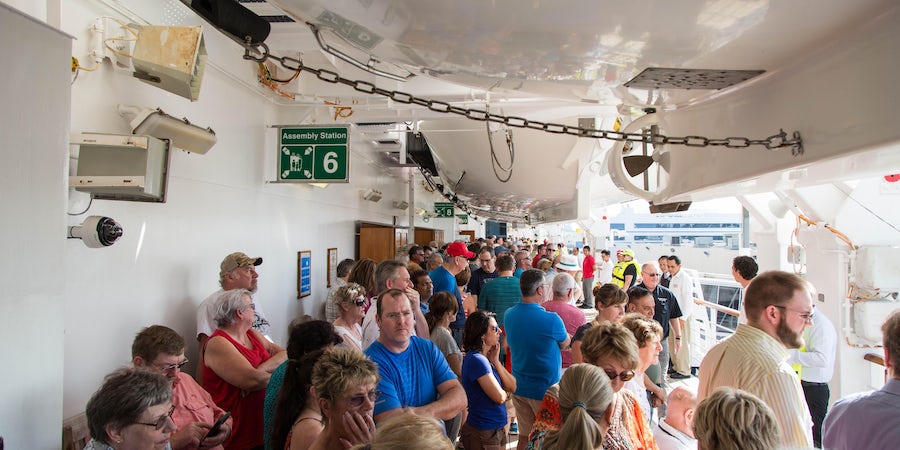 When cruise lines resumed operations in 2021 -- following a long hiatus due to the global pandemic -- one of the welcome changes we saw onboard was a move to socially distanced digital muster drills, or the "e-muster."

Many passengers welcomed the move -- waiting outside on deck for up to an hour, sometimes longer and in hot weather, for all passengers to assemble and the safety drill to be completed (and all bars closed) -- had become somewhat of a drag.

For the e-muster, passengers are required to watch the safety video either before they board or in their cabin, then make their way to the muster station to tap their cards on a reader to acknowledge they have visited -- in their own time.

The problem is many passengers have either been ignoring the video or not visiting the muster station, so some cruise lines have reverted to the traditional muster drill format.

Which Cruise Lines Have Scrapped the E-Muster Drill?

Norwegian Cruise confirmed to Cruise Critic it has in fact reverted back to the traditional muster drill.

The line released the following statement:

"We continuously evaluate our procedures for providing detailed instructions on safety and security measures to our guests, and as such have made the decision to reinstate synchronized, in-person muster drills on embarkation day across all vessels within the fleet.

"This policy will go into effect immediately upon each vessel's next embarkation day."

Cruise Critic members first revealed that NCL had reverted to the traditional cruise ship muster drill on at least some of its voyages back in November 2022.

On November 22, Scamber said on NCL's Boards page: "We were just on the Bliss, and we had to meet where our muster station was (there were people along the way to point us in the right direction) and they scanned our card and that was it, we were on our way.  Much prefer it this way than standing around waiting for everyone to get there like the old way."

Cruise Critic has contacted cruise lines for comment and will update this story when we hear more.