You may also like
Dismiss
Cruise Costs: Is Celebrity Cruises Good Value for Money?
Coastal Cruise Tips
5 Things to Know About Family Expedition Cruising
5 Reasons Why Families Will Love the Refurbished Norwegian Jewel
Pictures of Sky Princess
23 Things Cruisers Love to Complain About
The Best (Free) Things to Do on Carnival Panorama
Short Cruises on Queen Elizabeth: 10 Things You Need to Know
Why There's Still Nothing Like a Day on the Water
Photos From MSC Cruises' Return to Sailing in the Mediterranean 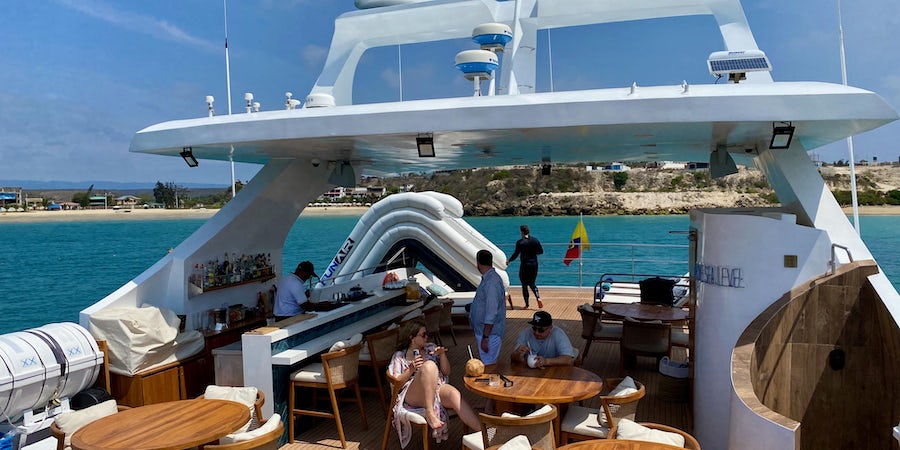 Taking its name from Kon-Tiki Viracocha, the god of creation in Incan mythology, Kontiki Expeditions is a relatively new yacht cruise line based in Ecuador. On a five-night boutique sea expedition on MS Wayra embarking in the city of Manta, I sailed along the Pacific coast, making stops at wildlife refuges, marine park reserves, Indigenous villages and secluded beaches – enjoying all the pampering amenities a “neo luxury” yacht can supply along the way.

The cultural immersion on a Kontiki Expedition cruise is truly authentic – and this is not just a buzzword. This cruise is not only full-on fun, but also a learning experience, an adventure incorporating ancient tradition and modern luxury, connecting guests with the natural surroundings and local communities of the coast of Manabí province. Here's what it's all about.

The agenda feels nomadic, expedition-like on MS Wayra, as we make wet and dry landings in fishing villages and national parkland, anchoring in places no other luxury yachts have visited before. This lends a feeling of exclusivity that lasts throughout the week. There is no pressure to keep to a schedule, so the on-shore exploits are more relaxed.

MS Wayra accommodates only 18 guests with an almost 1:1 staff-to-guest ratio, so the service proves spectacular, and the public spaces never feel cramped like some small vessels. The crew is mindful and intuitive, and the housekeeping staff is practically ghost-like, with the rooms refreshed several times a day. Other things that just "appear" include hot chocolate after we come out of the sea and hot canapes when we relax in the hot tub on the top deck. A member of the security staff is on hand throughout each shore excursion.

The Eco-adventure Rivals the Galapagos, On a Smaller Scale

Kontiki Expeditions and MS Wayra typically make five-to eight-day sailings, leaving from Manta in Ecuador. The itinerary takes you through five provinces along Ecuador's coast, diving deep into local culture (and offering plenty of water and other sports along the way).

On Isla de la Plata, part of Machalilla National Park, we take a three-mile hike, some of it quite steep. This "Little Galapagos" is a seabird nesting ground, a favorite of the region’s famous blue-footed boobies. A local guide points out parenting traits – the males watch over the eggs and fledglings, while the females head to the sea for food – and characterizing the comical behavior of these beautiful birds. On the plateau of the island, we come across Nazca boobies, mostly white, with green feet. Ten tour companies and three dive companies visit Isla de la Plata, but right now, we have the whole place to ourselves – another small ship perk.

Off the coast of Islote El Pelado, we splash into the water for a brilliant snorkel among the damselfish, sergeant majors and Cortez rainbow wrasses – with an eye on the nearby sea lions that are also enjoying the water. Everyone needs a good cooling off, it seems. A spotted eagle ray becomes the star of our highlight reel.

Twenty minutes from Manta, the Pacoche Marine Wildlife Refuge is also on our to-do list. We take an extremely pleasant walk along a small creek in this 32,000-acre tropical preserve, the ancient rubber trees towering overhead, spotting a tarantula, numerous exotic birds and a few loud howler monkeys.

Spanish and Indigenous Cultural Heritage Shines Through Every Day

Alighting on the pier at the fishing village of Puerto Lopez, we make our way in the van to the Indigenous community of Agua Blanca in Machalilla National Park. The people here are descended from the Manteño culture, which occupied the Ecuadorian coast from the year 500 to the 1500s.

Guided along a trail into the woods, waving at the goats that scamper along with us, we come upon community shaman Plinio Merchán within a chalk-drawn circle in a clearing. He and two assistants are dressed in traditional grass skirts and headdresses, bodies painted with rust-colored ink, ankles adorned with bells. Plinio leads us through a cleansing ceremony of thanksgiving, a spiritual ritual that helps preserve the village heritage, enlightening visitors in the process.

Even older than the Manteños, the pre-Incan Valdivian culture is on display at a pottery class on the beach at Ayangue, where visitors get their hands dirty, mixing raw clay with water, smoothing it out with paddles and by hand, then trying their hand at ceramics. Another afternoon, fifth-generation master weaver Domingo Carranza gives us a demonstration of hat-making. Made entirely of palm fronds, these traditional Ecuadorian toquilla straw hats – erroneously known as Panama hats – can take months to create, depending on the weave (and the tighter the weave, the higher the price). These hats make for a very authentic souvenir.

Even though the food onboard MS Wayra is terrific, culinary shote excursions reveal even more of the Ecuadorian cultural heritage.

Near the town of San Vicente, north of Manta, Iche cooking school and restaurant teaches local chefs how to use ancestral techniques to create five-star food. Chef Valentina Álvarez walks us through the compound – classroom, restaurant, kitchen, even a tiny distillery – ending with a tutorial in the herb garden, home of a wood-fired Manabíta-style oven. This jack-of-all-trades hearth is an oven, a slow-cooker, a grill, pretty much everything you need in one implement. We watch the students knead and bake, and wilt banana leaves, enlisting our help with grinding corn and shaping empanadas. We then sit down to enjoy even more coastal flavours – fish taquitos, shrimp ceviche and a fabulous coconut dessert.

Also on hand at Iche is Servio Pachard Vera, an organic fruit farmer best known as one of the world’s top producers of To’ak chocolate, which is made from the rare, heirloom Arriba Nacional cacao bean. He chops open seven different types of beans and we loll the pods around on our tongues, determining whether the taste leans to floral or fruity. We then shuck and toast a few dried beans, and hand-grind them into a paste, which Servio transforms into shots of the most remarkable, positively pure hot chocolate.

Numerous Watersports and Onboard Marina Supplement the Land Touring

Two paddleboards and two tandem kayaks make for full-body workouts, and four electric diving Seabob scooters add a little glamor, letting you ride below the waves. These are all tied to inflatable docks extending from the stern of MS Wayra.

A second aft configuration includes a floating deck “pool,” with netting at the base. Wetsuits, fins and masks lie waiting for snorkeling excursions and a FunAir inflatable slide flips over the side from the top deck – my favorite of all the toys. Truth: I came home two pounds lighter, thanks to all the exercise and the healthy eating.

Anybody Can Easily Get Used to Kontiki Expeditions' Refreshing, Carefree Pace

Go hiking in the forest in the morning, relax with a cocktail on the sun decks in the afternoon – you get the best of both worlds. This well-paced luxury cruise on MS Wayra never feels rushed, nor does it seem that the days are long, even though a few of them are. You just don’t notice – you’re too busy having fun.