You may also like
Dismiss
5 Best Disney Dream Cruise Tips
A Disney Cruise for Adults: 9 Things to Know When You Cruise Without Kids
Cruise Classes: 21 Things You Can Learn on Your Next Cruise
Where to Find Your Favorite Characters on a Cruise
Disney Cruise vs. Carnival Cruise
5 Mind-Blowing New Cruise Attractions of 2018
Pictures of Norwegian Encore
9 Reasons to Get Excited About P&O Cruises' Iona
Virtual Cruise Trip Report: Onboard a Cruise Critic Member's "Fake, Made Up and Completely Impossible" Cruise Itinerary
Disney Wish Floats Out; First Disney Cruise Ship in a Decade Has New Features 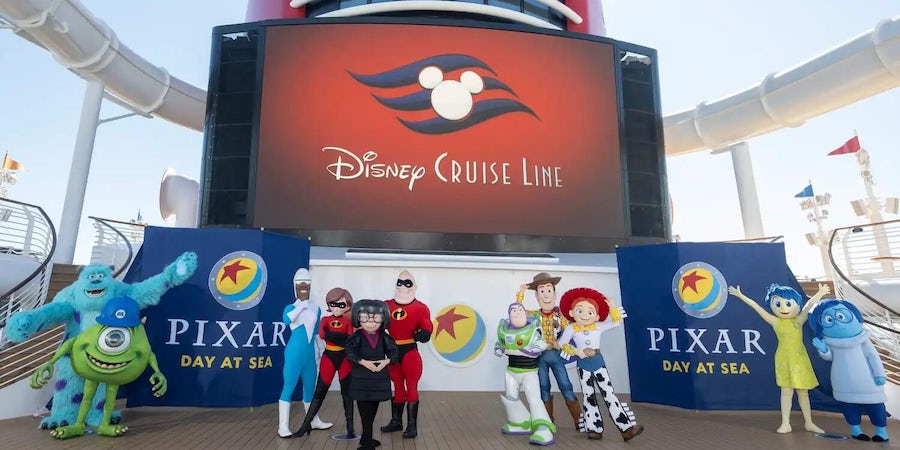 What is Disney’s Pixar Day at Sea?

There's exciting news for Disney and Pixar fans: Pixar Day at Sea is coming for the first time to Disney Cruise Line as a special themed celebration aboard Disney Fantasy in early 2023. We got a preview of sorts in 2012 on Disney Wonder with one in a series of "Pixar Cruises."

Fast forward to today, and the event has evolved into a whole new series of specially-designed themed sailings that celebrate all things Pixar.

What Is Pixar Day at Sea?

Making its shipboard debut in 2023 aboard Disney Fantasy, Disney Cruise Line's Pixar Day at Sea will complement the line's existing Marvel Day at Sea theme cruises that depart on select dates in 2023 aboard sister-ship Disney Dream. And much like Marvel Day at Sea, these themed sailings are designed to be completely immersive experiences into the worlds of Pixar Animation.

Once only a cinematic distribution partner, The Walt Disney Company fully acquired Pixar Animation Studios in 2006, and now the brand’s intellectual properties are everywhere Disney has a theme park, resort or cruise ship. From Toy Story Land at Disney’s Hollywood Studios in Orlando, Florida to Pixar Pier at Disney California Adventure in Anaheim, its animated stories have gone to infinity and beyond, and Pixar Day at Sea is just the latest activation.

"I am filled with 'Joy' knowing that the stories we tell at Pixar are beloved by so many and that they’ll be celebrated where friendship meets family on Disney Cruise Line," said Pete Docter, Chief Creative Officer at Pixar in a promotional video, alluding to one of the characters from "Inside Out," a film he directed at the studio.

"Happy sailing," he added before referencing a famous line from "Up," another of the director’s Pixar movies. "'Adventure is out there!'"

As a soundtrack to the adventure, guests can certainly expect to hear a lot of award-winning film music from frequent Disney composers Michael Giacchino, Randy Newman, Thomas Newman and others piped into the ship's passenger corridors, setting the shipboard ambiance early on.

Pixar Day at Sea Onboard Programming

Anchoring any good day at sea onboard a Disney ship are numerous character meet-and-greets, and Pixar Day at Sea is no exception. Among the characters available for interaction on Pixar Day at Sea sailings are Woody, Buzz Lightyear and Bo Peep from "Toy Story"; Mike, Sulley and Boo from"“Monsters, Inc."; Joy and Sadness from"“Inside Out"; Dug and Russell from "Up"; Miguel from "Coco"; and Mr. Incredible, Elastigirl and Frozone from"“The Incredibles."

Pixar Day at Sea cruises also offer a full-blown film festival, with screenings scheduled throughout the day at the onboard cinema, the Funnel Vision outdoor screen by the pool, and in the Walt Disney Theatre.

As on regular Disney cruises, guests can expect the studio’s latest first-run films to be highlighted, as well as its extensive catalog of previous titles encompassing "Finding Nemo," "A Bug’s Life," "Cars" and lots more. And don’t forget Pixar’s legendary short films, too. “For the Birds” and “Lifted” have to be some of our all-time favorites.

Meanwhile, activities will culminate with both a family-friendly dance party staged by the Pixar characters and new evening spectacular enlisting The Incredibles and fellow passengers to help save the day.

Character dining onboard these special sailings will extend to a unique country breakfast hosted by none other than Sheriff Woody, Jesse and Bullseye to lead sing-a-longs and cowboy serenades. And a Pixar-themed dinner will take inspiration from the studio’s Emeryville, California headquarters.

Among the rotational dining rooms on Disney Fantasy is the animation-themed Animator’s Palate, where guests will further have the opportunity to actually chat with Crush, the "totally" awesome sea turtle from"“Finding Nemo."

No Pixar Day at Sea would be complete without exclusive merchandise commemorating the event, and the shops come stocked accordingly, from logo pins and apparel to limited edition art pieces. And professional photos of aforementioned meet-and-greets can be purchased as well.

From January through March 2023, the ship will visit the following ports of call plus a stop at Disney’s private island Castaway Cay: Tortola, St. Thomas and San Juan, Puerto Rico (in the Eastern Caribbean) and Cozumel, Mexico; Grand Cayman; and Falmouth, Jamaica (in the Western Caribbean).