You may also like
Dismiss
Carnival Breeze vs. Magic vs. Dream
10 Reasons to Take a Cruise over a Land Holiday
Disney Cruise Line History
MSC Cruises History
Which Cruise Ships Are Getting Refurbished in 2020 and Why You Should Care
Cruising with Jane McDonald
What Is the Biggest MSC Ship?
What Is LNG Gas, and What Are LNG-Powered Cruise Ships?
The 10 Most Popular Episodes of “Cruising with Jane McDonald”
Why Germ-Zapping Robots and AI Technology Could Be the Future For Cruise Ships 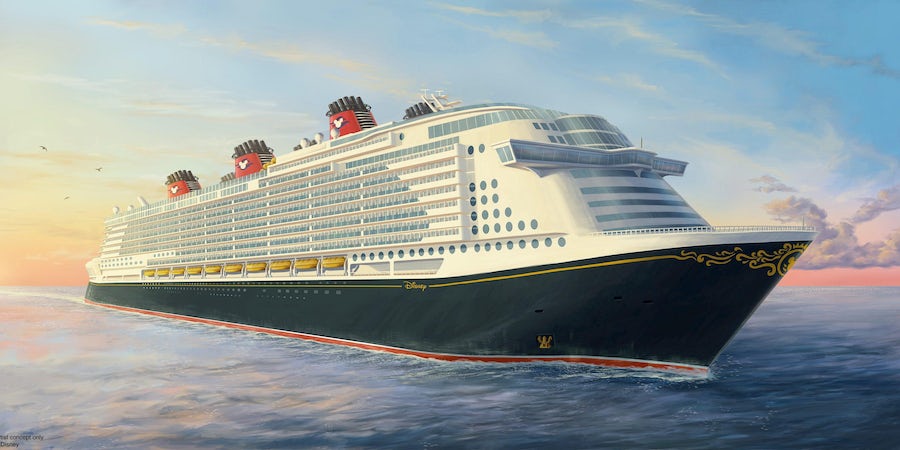 What We Know About Disney’s Newest Cruise Ship, The Former Global Dream

In a surprise turn of events, Disney Cruise Line recently announced the purchase of a partially complete newbuild -- originally intended for another company -- that will be repurposed for the family-friendly cruise brand.

The as-yet-unnamed vessel is scheduled to set sail for Disney in 2025, catering to global destinations (and likely passengers) outside the United States.

From Global Dream to Disney Cruise Line: The History of the Ship

Under construction since 2018 and delayed due to the pandemic, the ship -- initially dubbed Global Dream -- was previously set to launch for Dream Cruises, catering mostly to Asian travelers, in 2022. However, Genting Hong Kong, the line's parent company, went bankrupt in early 2022, causing the unfinished ship to be put up for sale.

Before its financial demise, though, Global Dream made headlines as the cruise industry anticipated its arrival as the next largest cruise ship in the world -- at least by capacity. Its specifications then called for a maximum passenger count of 9,000. This number was somewhat exaggerated given only 4,700 could be accommodated in lower berths, with the higher tally taking into account potential third guests or more in each of the 2,350 staterooms and suites.

Overall gross tonnage -- actually a measurement of space, not weight -- is set at roughly 208,000. By passenger volume, this makes the ship slightly smaller in size compared to Royal Caribbean's existing Oasis-class ships like Wonder of the Seas, and even MSC Cruises’ new megaship, MSC World Europa.

Why Would Disney Buy The Unfinished Global Dream Cruise Ship?

The surprise comes by way of Disney Cruise Line being the cruise line to purchase, complete and operate the unfinished Global Dream. The company has an established reputation for not only building bespoke ships, but also fully designing them from scratch from the keel up. In this case, the superstructure is already complete, and interiors are ready to be installed.

Reports indicate it was likely the price that swayed Disney to acquire the ship -- once valued at 1.8 billion Euros -- for a staggering discount of only 40 million Euros.

It’s also worth noting that the Walt Disney Company umbrella has experienced a massive executive shakeup lately, with former CEO Bob Iger being brought back to replace Bob Chapek. Whether this development will affect these “new” ship plans for Disney Cruise Line is still to be seen.

What Will the Ship Look Like Under Disney Cruise Line's Leadership?

What exactly will the new ship look like for Disney given its current state of construction? Physically, it will remain the same size, but its planned capacities will be altered. The new expectation is for approximately 6,000 passengers and around 2,300 crew or cast members in Disney-speak.

However, this ship will be in a class of its own, being not directly related to any existing Disney vessel in the fleet -- Disney Dream, Disney Fantasy, Disney Magic, Disney Wonder, and the new Disney Wish included.

A released exterior rendering of the Dream-turned-Disney ship does display some architectural changes from Global Dream. The most obvious change is the removal of the ship’s current hull art in favor of the line’s traditional black or dark gray -- actually “Monica Blue,” named after a cast member’s clothing that inspired the hue -- delineated in red and yellow and finished off in white at and above the boat deck.

Meanwhile, a more rounded forecastle crowning the navigation bridge is present, boxier balcony elements have been softened a bit with swoosh outlines and several rectangular windows have been swapped with classic round portholes. Not to mention, the ship’s initial pair of smokestacks have been repeated from just two to a whopping six. Altogether, the red funnels and overall livery will maintain Disney’s signature Mickey-inspired color palette.

What Onboard Features Can Future Disney Cruise Guests Expect?

Little more is known about the ship’s design including its interiors, but we do know it will be powered by green methanol, one of the lowest-emission fuels on the market. And a press release did state that "certain" features would be reimagined under the leadership of Walt Disney Imagineering, the parent company’s department in charge of creative development.

While the language of "certain" leads us to believe any redesign will be comparatively superficial, the project timeline indicates plans may in fact be more extensive. With a target launch of of 2025, a lot of time is available to make expansive modifications. These may include substantial alterations to the ship’s cabins if they are to sport the same family-friendly configurations Disney is known for, namely split bathrooms with a tub/shower and sink in one compartment and a toilet and sink in the other.

Questions also remain regarding implementation of the line’s rotational dining concept, what will replace the existing casino space, likely an expansion of the Disney’s renowned kids' facilities, and much more. Global Dream was originally ready to install a theme park on deck encompassing waterslides as well as a roller coaster, not unlike the one on Carnival Cruise Line’s latest ships Mardi Gras and Carnival Celebration, but longer. Which of those elements will be “Disney-fied” or replaced remains to be seen.

Who Will Disney's Converted Global Dream Cruise Ship Be For?

Disney has already hinted this new ship will not be based in the United States. Speculation is that it will still be dedicated to Asian destinations and markets, servicing one of Disney’s largest sets of international fans.

"Our cruise ships give us the unique opportunity to bring Disney magic to fans no matter where they are, and the addition of this ship will make a Disney Cruise Line vacation accessible to more families than ever before," said Josh D’Amaro, chairman, Disney Parks, Experiences and Products.

More details about the ship’s maiden voyage, itineraries and onboard experiences will be revealed in the future, according to Disney.