You may also like
Dismiss
Top 10 Seasonal Cruises for British Cruisers
Best South Pacific Cruises for Nature-Lovers
Can I Cruise While Pregnant? What You Need to Know
Coastal Cruise Tips
How Reassuring are New Cruise Cancellation Policies Really?
Photos From MSC Cruises' Return to Sailing in the Mediterranean
The Best New Cruise Ships for 2021
Want to Visit Antarctica? This Antarctica Cruise Hack Lets You Save Time and Skip the Seasickness
When Is the Best Time to Cruise to Antarctica?
2022 Alaska Cruises Are Going Strong, But Supply Chain, Employment Issues Remain 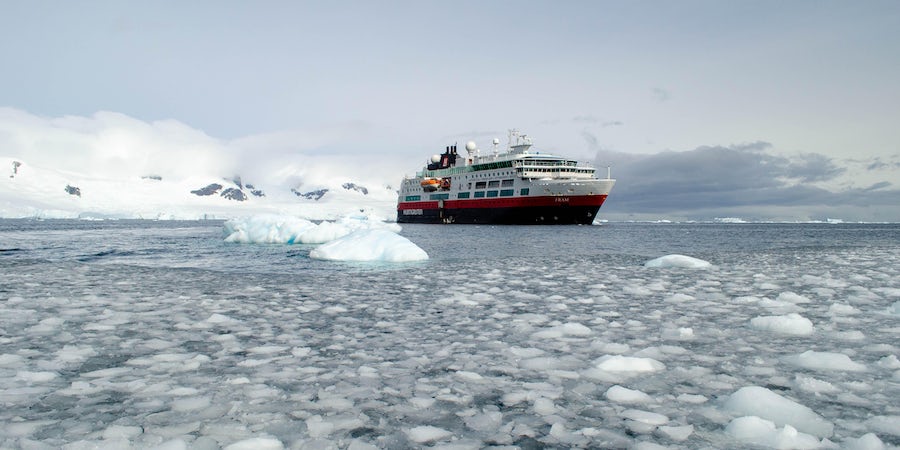 How Safe Are Expedition Cruises to Antarctica?

In recent years, expedition cruises to Antarctica have quadrupled in popularity. In 2019, Antarctica welcomed 55,000 tourists (not solely cruise passengers); this year it is double that, according to figures from Silversea. And the rewards for making the journey south are adorned with breathtaking wildlife, amazing scenery and no small number of bragging rights.

But as more cruise lines carry more passengers south, it has people wondering: How safe are Antarctic cruises? Far from being a calm voyage to the Caribbean, a cruise to Antarctica still carries a certain amount of personal risk -- this is a serious expedition destination, and staying safe is top of mind for ship's officers and Expedition Teams.

A decade ago, ships sailing to Antarctica took passengers who were serious explorers to the Last Continent. These were rugged ex-Russian icebreakers and veteran polar ships built like tanks. Prices were high, and comfort was basic.

Today's polar fleet is more indulgent than ever, and as more berths open up in this region, prices (though still sky-high) are beginning to put Antarctica within reach of the Average, albeit Quite Well Off, Joe.

Here's what you need to know to keep yourself safe before you plan an expedition South, to Antarctica:

Antarctica Expeditions Are As Safe As Possible, Though Accidents Can Happen

There have been several mishaps to the 2022 season already, which has only just begun, including the tragic death of two Quark Expeditions guests in a Zodiac which flipped over near Elephant Island, and the death of another guest aboard Viking Polaris, which was struck by what the line called a "rogue wave" on the evening of November 29 that broke several windows aboard the vessel, killing one passenger and injuring four others.

"We have notified the guest’s family and shared our deepest sympathies," a Viking representative told Cruise Critic on November 30. "We will continue to offer our full support to the family in the hours and days ahead.

"We are investigating the facts surrounding this incident and will offer our support to the relevant authorities."

Other instances that have occurred on Antarctic expeditions this season were frightening but resulted in no loss of life, such as when a submersible operated by Scenic became temporarily trapped under the ice and unable to surface, and a Zodiac accident aboard an earlier cruise of Viking Polaris.

While vessels traversing Antarctica are all built to a high standard and offer reinforced hulls suitable to traversing ice of varying thickness (determined by a rating known as "Ice Class"), accidents can still happen.

In November 2007, the 1969-built expedition ship Explorer sank after colliding with an iceberg near King George Island. All passengers and crew on the cruise, run by the company then known as G.A.P. Adventures, were safely evacuated from the ship by other nearby expedition ships. The official accident report, issued in 2009, listed the cause of the sinking as the result of the Captain's mistaken belief that the ship was encountering "first year ice" -- fragile, easily broken ice floes -- as opposed to the much older, harder deep sea ice that the ship eventually struck.

An expedition ship, Clelia II, lost power in December 2010 and became stranded in the Drake Passage. All passengers and crew were safe, but the resulting video, taken from a nearby Lindblad Expeditions ship, has gone viral in recent years.

Of course, statistically very few expeditions end in this sort of large-scale disaster. But the fact remains that much of Antarctica, including the Antarctic Peninsula which most expedition ships traverse, is so remote that timely help -- outside the ship's infirmary -- for basic accidents and ailments can be days away.

That brings us to the biggest warning we can issue about cruising to Antarctica: assessing your own personal health and risk tolerance.

Knowing Your Limitations Is Crucial In Antarctica

Simply put, Antarctica is not the place you want to break a leg or twist an ankle. You do not want to have a heart attack in the Southern Continent. You want to be fit, in reasonably good health and shape, and able-bodied enough to walk unaided over rough terrain frequently covered in snow, ice, and penguin guano (which itself is surprisingly slippery).

Shipboard infirmaries can deal with a wide variety of circumstances, but anything requiring immediate medical care of an advanced nature -- heart attacks, serious accidents and the like -- requires a trip back to the mainland. And while ships will indeed turn around and head back to South America or King George Island where there is an airstrip to offload anyone who is critically ill, that journey can take up to three days, depending on the position of the ship.

That's what makes knowing your own personal limitations in Antarctica so crucial. Those with mobility issues will find it difficult to enter and exit the Zodiac rafts required to make shore landings, and even harder to traverse some landing sites. That's not to say you can't stay onboard your ship -- you most certainly can enjoy Antarctica's beauty from your favorite lounge or open deck -- but after countless expeditions to Antarctica and other regions, we've seen some very close calls.

Falling out of the zodiac, for example -- something we've witnessed on expeditions in Australia and Costa Rica when passengers weren't paying attention or were trying to get a better photo -- is nothing more than an embarrassment in warm weather. In Antarctica, where the water is below freezing, hypothermia can set in with shocking rapidity.

Likewise, it's wise to be cautious about your ability to withstand the popular "polar plunge." Sure, you're only in the water for a few seconds and you're usually attached via harness before you jump. But heart attacks have been known to happen.

Listen to Your Antarctica Expedition Staff, They Know What They're Talking About

Perhaps the most important thing we can emphasise is following the instructions of your Expedition Staff. If they tell you not to stand up in the Zodiac there is good reason not to; if they tell you it's time to get back to the Zodiac because a storm is coming do not try and take that last pic of a cute penguin. They will tell you which areas on shore are safe to walk on, and how far you can go (rule of thumb: never let the ship out of your sight) and will guide you on when it is safe to enter and exit the Zodiacs -- and when it's not.

During those two days across the Drake, when you're waiting for landfall and you are listening to constant safety lectures and briefings -- there is a reason -- it's so you are prepared when you get there. It may get boring after awhile, but believe us -- it pays to listen.

Likewise, shipboard staff will keep you apprised of bad weather, and when it might be time to take those anti-seasickness pills or precautions. Weathern announcements are usually made by the Captain or Expedition Leader, who will advise passengers to use caution when moving about the ship, and ask them to store and secure loose items in their cabins. Be sure that you do: while crossing the Drake Passage can be unpleasant for those prone to seasickness, being hit in the head with an unsecured camera or hardcover book can do more damage than you may think.

An expedition cruise to Antarctica should not be undertaken without proper medical evacuation insurance. In fact, many cruise operators in the region will demand this, along with a set amount of insurance in the case of medivacs (which, unsurprisingly, can been exceedingly expensive).

Many expedition cruise lines will require you to have a signed letter from your family physician stating that you are of sound body and mind and have no medical conditions that will preclude you from having a safe, enjoyable time in Antarctica. Some operators will also request that you have a doctor sign off on your mental health, as well. Antarctica is not the place you want any underlying conditions to manifest themselves.

Also, if you feel that your days of getting in and out of kayaks or submarines are behind you, listen to your intuition. While you certainly want to get the most out of your trip, Antarctica is not necessarily the place to try a new sport or push your limits too far.

Most importantly, passengers intending to embark on an Antarctic expedition should always keep in mind a health respect for the beautiful -- yet unforgiving -- landscape they're about to explore.

Be aware of the changing weather conditions; snow squalls can come in suddenly, turning sunny, warm days into near-zero-visibility challenges. Dress appropriately for the conditions: layers are crucial -- it might start as a sunny, clear day, then turn into a blizzard before the day's end -- wear sunglasses, sunscreen and warm clothing as needed. Precipitation rarely falls on the Continent, but that isn't the case on the Antarctic Peninsula where most cruises end up exploring.

Seasonality can also affect Antartctic cruises. January typically offers the warmest temperatures, sometimes approaching 0 degrees Celsius (32 degrees Fahrenheit), while shoulder months like October and March can offer cooler temeratures. Ice is prevalent in October through December, while sea ice is hardly present in March, as the days get shorter and temperatures drop once again.

Above all, listen to your Expedition Team and be always aware of your surroundings. The Expediton Staff, together with the ship's officers and crew, will keep passengers as safe as possible.

Antarctica is a beautiful, life-changing place that is like nothing else on earth. But it is a destination that, perhaps more than others, is constantly demanding of your respect.