You may also like
Dismiss
Top 10 Seasonal Cruises for British Cruisers
10 Reasons to Take a Cruise over a Land Holiday
Top 8 Long Haul Short Break Cruises
5 Things to Know About Family Expedition Cruising
Best Cruise Travel Agents
8 Exhilarating Shore Excursions
Best New Itineraries on Small Ships in 2021-2022
Virtual Cruise Trip Report: Onboard a Cruise Critic Member's "Fake, Made Up and Completely Impossible" Cruise Itinerary
Want to Visit Antarctica? This Antarctica Cruise Hack Lets You Save Time and Skip the Seasickness
What Is Sustainable Cruising, and Why Should I Care? 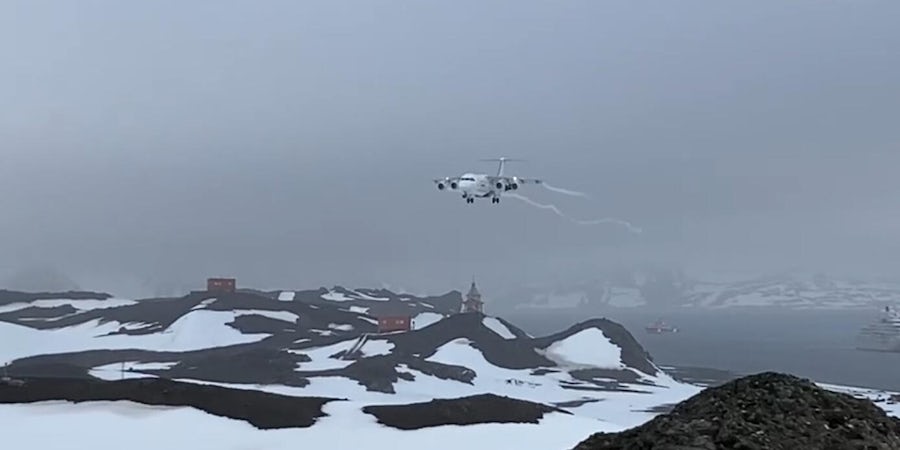 Ultra-luxury line Silversea Expeditions has just launched its flights to Antarctica program on its newest expedtion ship, Silver Endeavour, which the line calls the "Antarctica Bridge".

These Antarctic flights allow passengers to fly direct from the Chilean mainland (Punta Arenas) to King George Island, Antarctica, where they join Silver Endeavour -- all while skipping the famously turbulent Drake Passage that lies between South America and Antarctica.

How long is the flight to Antarctica? Just two hours from Punta Arenas -- which means the new program cuts out four days of travel across potentially stormy seas.

It also means time-poor, cash rich passengers can visit Antarctica on a 10-day trip, rather than the usual two weeks.

Silversea Expeditions is not the first cruise line to offer flights to Antarctica, but it is the first to fly them there in such comfort and style.

The luxury experience starts from the moment you arrive at Silversea's private terminal at Santiago Airport. All check in and seat allocation procedures are done the day before, so you just walk in and wait for your flight.

Silversea has an exclusive charter with Antarctica Airways which flies passengers at a civilized time (mid-morning) in business class to Punta Arenas, at the very southern tip of the Chilean mainland.

In addition, the line has stripped out 16 seats on these Embraer aircraft; extended the seat pitch and put in a 2-3 configuration with no one in the middle seat. There is also a three-course meal service (with food sourced from a local family concern in Puerto Williams); with all drinks included.

At Punta Arenas, Silversea puts up passengers in the best hotel in the city, Cabo de Hornos, for one night where you pick up your included kit -- a bright red branded parka, waterproof Helly Hansen pants, waterproof wellington boots, a rucksack and a water bottle -- as the expedition starts as soon as you land.

The next morning, the same planes take you on a two-hour flight to a gravel landing strip on King George Island, Antarctica, where you join the ship.

The exciting aspect of this is that you start your expedition straight away -- fully kitted up and ready to jump on a Zodiac from the beach to the ship.

The whole process is repeated on the way back, but…

The Weather in Antarctica Can Upend the Best-Laid Plans

The challenges arise with the notoriously changeable Antarctic weather, as we found out. Additionally, King George Island is the nearest airstrip and is also home to 14 research stations, meaning air traffic at the best of times can get busy.

In our case, it was a series of unfortunate incidents -- the first day of operations for the new season, a medical emergency, an unplanned helicopter landing, an aircraft skidding on ice and a recent death on the island, meant there were four planes and a helicopter trying to find a space to take off, and medical emergencies always take precedence.

The result was passengers were left hanging around in a makeshift terminal and on the tarmac (no fault of Silversea's) as the line's pop-up terminal had not yet arrived. Although the terminal issues are a one-off, and the many planes landing at once is likely an unhappy coincidence, the weather isn't.

And that's where the challenges lie: we had to get off the ship a night early to take advantage of a weather window, which would have closed in for three more nights if we had not left when we did. Not great for us, but a bonus for incoming passengers who enjoyed an extra night onboard.

Either way, it's clearly a risk that Silversea is willing to take, as there is significant demand for the Antarctica Bridge, which is sold out for this season.

Ironically, though, you are effectively paying more than a $1,000 a day to not travel across the Drake, as the price point of the Air Bridge is around $5,000 more than a typical Antarctic crossing.

And for those who want to roll the dice with the "Drake shake", Silversea has two other ships operating from its new base of Puerto Williams -- Silver Cloud and Silver Wind.

But what happens if the plane makes it to King George Island in time and passengers are stuck onboard while incoming passengers wait around in Punta Arenas?

It won't happen, according to Silversea's UK managing director, Peter Shanks -- the flights only take off from Punta Arenas if they know they can fly back.

And if that means passengers have to spend an extra night in Punta Arenas, Silversea has put in place a slick ground operation which offers guests a choice of shore excursions, such as the one we took to an "estancia" (large farm) nearby.

For those keen to experience more of Patagonia, the all-day visit to the working farm includes a hearty BBQ of lamb from the farm, a demo of sheep dog training and a guided walk with the owner before going condor watching nearby.

The backdrop of the snow-capped Andes and the vast open landscape gives you a real sense of this place, and actually enriches the whole experience (Antarctica is of course breathtaking, but Patagonia has a unique end-of-the-world feel).

Some Antarctica "purists" on this voyage were still insistent that the only way to see Antarctica was to cross the Drake, but as guest lecturer and historian onboard Nicholas Crane put it so succinctly: The British explorers felt they had to suffer to achieve, whereas the Norwegians thought the opposite.

And although I may be British, I am firmly in the Norwegian camp and would rather fly in comfort than suffer 48 hours of pitching and rolling; I want to enjoy my trip, not endure it.