You may also like
Dismiss
AmaWaterways vs. Viking River Cruises
5 Things You Didn't Know About Booking a Costco Cruise
Best Months to Cruise the Mediterranean
8 Reasons to Cruise on a Refurbished Ship
How to Save Money on a Disney Cruise
How to Save Money on a Carnival Cruise
How to Find a Great Deal on Cruise Critic With One Easy Tool
MSC Cruises FAQ
How to Book a Suite for Less
What Are Carnival's Early Saver Cruise Deals? 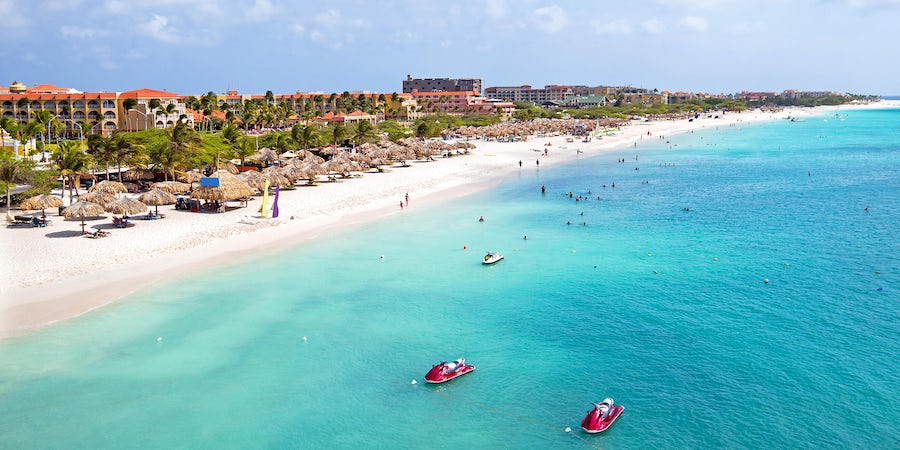 Aruba Cruise Deals: A Guide to Scoring the Best Cruise for You

Dreaming of Aruba and wondering if you can get a deal on a cruise that goes there? The answer is yes, you can. Even though cruises that travel to the deep Southern Caribbean, where Aruba is found, are often labeled "exotic," Aruba cruise deals are not impossible to find. Known for its stunning beaches and crystal-clear waters, Aruba has something to offer everyone, whether you're looking for adventure, relaxation, or a little bit of both. The port city of Oranjestad has an abundance of shopping, casino, restaurant, and tour options.

Aruba cruises leave from a variety of ports, including Florida ports like Miami, Fort Lauderdale, and Port Canaveral, plus San Juan, Puerto Rico and even Barbados. That makes finding the deals somewhat complicated, but Cruise Critic has done the research for you. We checked cruise lines looking for every possible option, from budget to luxury. We've done the math to help you discover what is considered a deal (and what is not). We've also got plenty of tips to help you score the best Aruba cruise deal for you and your travel partners. Let’s dive in.

What Kind of Aruba Cruise Deals Can You Expect to Find?

The surprising part is the choice of cruise lines offering deals in those ranges. The list includes Holland America, Celebrity, and Norwegian Cruise Line, posting the lowest priced Aruba cruise deals, followed by Carnival and Royal Caribbean. And if a bit more luxury is your aim, check out Windstar, Silversea, Regent Seven Seas, and Seabourn, which all cruise to Aruba in the winter and early spring months.

Black Friday and Cyber Monday may be the best times to book your cruise to Aruba. Black Friday deals often top off low fares with extras like onboard credit, low deposits, and extra perks like beverage packages. If you miss those Aruba deals, shop during the coldest months of January and February, when cruise prices are typically at their lowest.

Aruba cruise prices are at their peak in June and July, followed closely by March when spring breakers pour onto cruise ships and airplanes bound for anywhere warm. Because there are no short Aruba cruises, prices and capacity are affected a little less by spring break season than say Bahamas cruises, but they do still rise a bit, and you can expect to find the island overwhelmed by young people most of March and into April.

The lowest prices we found for Aruba cruises were in late November and early December, followed by February.

We found good deals on cruises as short as seven nights, but the best prices were often 9- to 12-night itineraries. An example was the 12-night sailing we found on NCL from Miami, offering balcony cabins for as low as $123 per night. Factor in NCL’s “Free at Sea” inclusive packages, and that becomes a sweeter deal.

Aruba is a relatively small island, but it packs a big punch when it comes to what it offers to cruise guests. Popular excursions include snorkeling, scuba diving, sailing, and visiting the Aruban Arikok National Park. There are also several golf courses on the island. The cost of excursions can make or break your deal. Because Aruba has an abundance of tour offerings, you may find that it’s possible to save money booking independently, rather than through the cruise line, unless your line offers included tours or excursion credits.

Because cruises to Aruba often are heavy with sea days, this may be a cruise where you’ll benefit from cruising on a ship with all the bells and whistles that you and your cruise partners need to stay busy. Ahem, we’re talking to you, parents of tweens and teens. Yes, you’re going to have fun in Aruba and on the other islands your cruise visits, but you’ll all be happier onboard a ship with slides, rides, and gizmos designed with families in mind between those ports of call.

How to Snag the Best Aruba Cruise Deals: Tips for Beginners

Here are some basic tips for finding the best Aruba cruise deals: