You may also like
Dismiss
Which Cruise Can You Book for $300 a Day?
5 Things You Didn't Know About Booking a Costco Cruise
Which Cruise Can You Book for $500 a Day?
Best Budget River Cruise Lines
AARP Cruises: Discounts on Travel for Seniors (and Everyone Else)
How to Save Money on a Disney Cruise
9 Best Cruise Lines for Cruise & Stay Packages
How to Book a Suite for Less
How Reassuring are New Cruise Cancellation Policies Really?
5 Cruises That Are Cheaper Than a Weekend in New York City 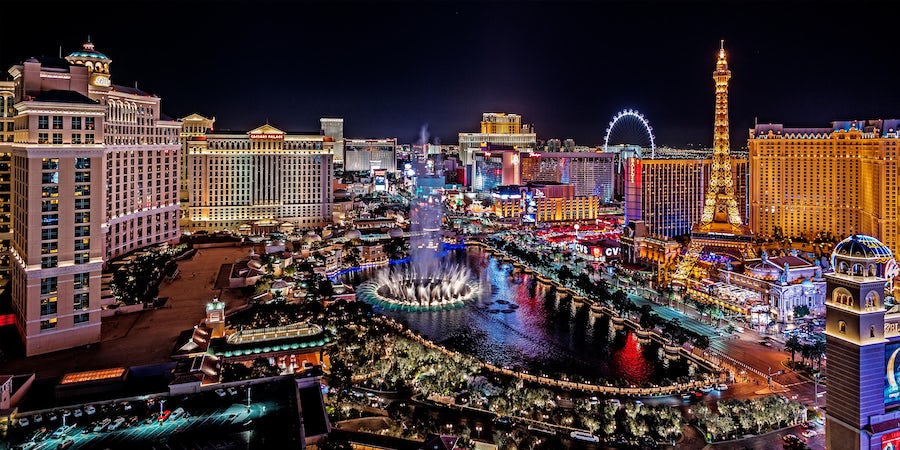 6 Cruises That Are Cheaper Than a Weekend in Las Vegas

Located in the heart of the Mojave Desert, some 270 miles away from the nearest shore, Las Vegas may seem like the furthest experience from a cruise vacation. But what happens in Vegas… happens in cruise ships, too. Casinos, complete with slots, table games, poker and other favorites, are the most obvious connection, but lavish buffets, specialty restaurants, and elaborate live shows are also common features of cruise ships, especially on the biggest vessels of the biggest lines.

And if a Vegas trip is your idea of a jackpot vacation, there is another persuasive reason to consider a cruise: value.

A weekend stay in Las Vegas can average $1,500 per person when you tally mid-range accommodations, dining costs, entertainment and other expenses like taxis, Ubers or the Vegas monorail. The total cost per person can go up considerably when choosing high-end hotels or a higher room category, and that's without factoring in your gambling budget.

It's a safe bet that you can score cruise vacations for less than a weekend escapade to Sin City. And while inside cabins are typically the most inexpensive rooms you'll find on any given cruise, you can also find oceanview cabins, balcony cabins and even suites for less than the cost of a trip to Vegas.

Finding a good deal need not be a crapshoot: from weekend getaways to week-long ocean crossings and more, using Cruise Critic's Deal Tool we've listed several cruise options that can be had for a lower price tag than a weekend in Las Vegas.

Editor's note: Prices fluctuate daily. It's likely that the prices quoted in this article have changed since time of publication, therefore they should be viewed as an estimate. Visit Cruise Critic's Find a Cruise page to get up-to-date pricing.

But the Vegas-style entertainment doesn't end with the largest cruise lines. Other

brands like Cunard, Celebrity, Holland America, MSC Cruises, Princess and Virgin Voyages, to name a few, offer their fair share of casino fun and lively entertainment. One notable exception, however, is Disney Cruise Line as you will not find casinos onboard any of their ships. Luxury lines, too, tend to have smaller ships and usually do not dedicate major real estate to casinos.

Weekend Cruises Double Down on Value over a Weekend in Vegas

If three or four days is all you can spare for a getaway, then you'll be glad to know that weekend cruises are usually the most inexpensive option to sail. And the value is staggering when compared to a weekend in Las Vegas. Depending on the time of the year, it's not uncommon to find fares for as low as $250 per person for an inside cabin. Three-, four- and five-day cruises can range between the lower $200s to about $500 per person.

Another advantage of a weekend cruise is that you'll be able to find a higher category cabin, so balcony rooms or even suites are not out of the question. Case in point: A suite on a three-night voyage on an Oasis-class Royal Caribbean ship or Norwegian's Breakaway-class can go for as low as the mid $500s per person, while you can find similar suite deals on MSC Cruises for $619 per person.

The dry desert heat of Las Vegas is a far cry from the tropical humidity of the Caribbean, but weeklong cruises in this classic cruise destination bring great opportunities to enjoy some Vegas-style fun.

Contrary to their land-based counterparts in Sin City, casinos on cruise ships aren't open 24/7. Cruise ships may only operate their casinos when the vessel is out at sea or in port in countries where gambling is allowed. This rule makes Eastern and Western Caribbean itineraries attractive, especially those that sail roundtrip out of Florida or Gulf ports and take a sea day or two to get to their ports of call.

And since the Caribbean offers no shortage of cruise options, enticing deals are usually not hard to find. Prices can hover between $250 and $600 per person for a 7-day cruise, but depending on the time of the year, a bargain for just under $200. And the longer the cruise, the bigger the savings. You can snag a 16-night round trip sailing from Fort Lauderdale for $999 on an oceanview cabin or pay as low as $1,079 per person for a balcony cabin on a 15-night Eastern Caribbean cruise from Miami.

Further to the above point, if you're looking for more sea days on your itinerary, nothing beats an ocean crossing. Transatlantic voyages leaving from North America or Europe will invariably boast the most attractive deals. Think a 12-night Miami to Barcelona voyage for $781 on an oceanview cabin (or $979 for balcony), or 7-night cruise from Southampton to Brooklyn (with 0 ports of call a long the way) on Cunard for as little as $599 per person on an inside cabin.

Just like a trip to Vegas, the best fares will depend on the time of the year, so the above examples can usually be found during shoulder season (early spring or late fall). And while it's true that airfare will add to your expense, you might still find that the grand total may still fall below or at the same level as a weekend trip to Las Vegas.

Roll the Dice on Package Deals

Cruise deals aren't just limited to the price of the fare. Add-ons like free drink packages, free Wi-Fi and onboard credit increase the value and can make the difference between a good bargain and a great one. On board credit is especially enticing, as you can use the credits on the casino or to indulge in specialty dining on your cruise.

You'll typically find most add-on deals during Black Friday/Cyber Monday or Wave Season, but it is possible to score these sales at any time of year.

Cruise Critic's Last Minute Cruise Deals page can help you customize your search so you can track up-to-date bargains that best fit your needs.

Interested in finding more cruise deals? Don't miss our guides to Black Friday and Cyber Monday cruise deals, as well as our complete guide to Wave Season: the busiest booking period in the cruise industry.