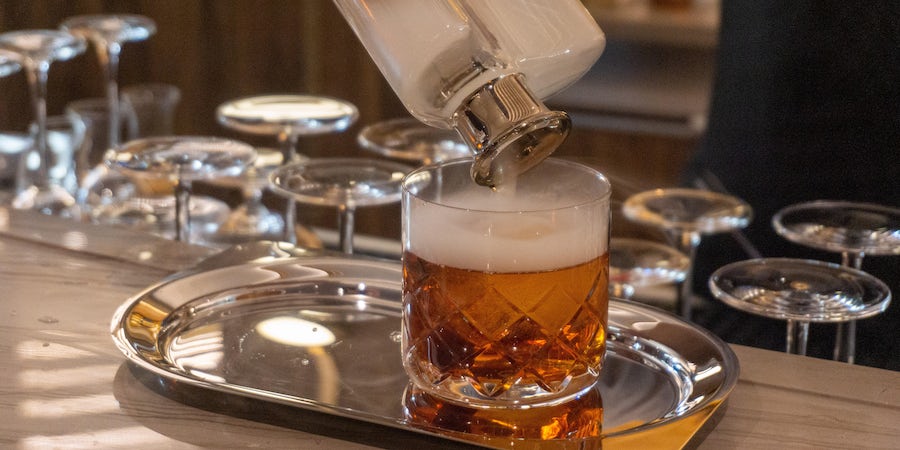 These Are The Most Expensive Cruise Ship Drinks At Sea

When the newest Disney Cruise Line ship, Disney Wish, launched in the summer of 2022, one of the buzziest stories on board was the swirling speculation around the mysterious $5,000 beverage available in the brand-new Star Wars Hyperspace Lounge.

What was in this cocktail to warrant such a high price tag? And what was up with all the secrecy surrounding it? The answer, thanks to a handful of influencers and other passengers who coughed up the funds to test it out: The Kaiburr Crystal is a flight of rare spirits and a cocktail served in an intriguing vessel, along with some take-home swag and tickets to visit Skywalker Ranch. The speculation continued: did it merit such a price tag, rivaling the cost of the entire vacation? The real shock is that this isn’t even the most expensive drink on a Disney cruise (more on that later).

The hype around that cocktail got us thinking: What are the most expensive drinks on other cruise lines, and what’s the allure of ordering the most expensive thing on the menu? Whether you’re a high roller, or you just want to take a peek at how the other half drinks, here are some of the most eye-poppingly expensive cruise ship beverages you’ll find on the high seas. Most of them don’t come with the same amount of pomp and circumstance you’ll find with the Disney drink, but for liquor aficionados they just might be the best kind of vacation splurge.

One thing is safe to say: these drinks are probably not what you think -- and no, they're not included in your drink package.

On board a Virgin Voyages cruise, you might have heard about the signature “Shake for Champagne” service involving summoning a delivery of chilled bubbles (Moët Chandon Impérial Champagne, to be specific) at the shake of your cell phone.

At $95, however, this is not the most expensive drink you’ll find on board a Virgin ship. That honor currently goes to a bottle of tequila, Casa Dragones Joven, a small-batch liquor noted to be a "uniquely smooth sipping tequila" by its manufacturer. The price tag for a bottle at the Mezcal Bar onboard Scarlet Lady? Hopefully it won’t make you shake -- it’s $990.

Fans of cognac will likely be familiar with Rémy Martin’s Louis XIII cognac, a spirit made from 1,200 kinds of eau de vie (fruit brandies). Each bottle of this rare cognac requires "four generations of cellar masters over 100 years to craft," according to the Norwegian Cruise Line menu, describing the tasting as "a firework of aromas, spice, fruit, wood, and nut dimensions."

Full bottles of Louis XIII retail for upwards of $4,000, with some decanters (depending on the design) fetching as much as $200,000. The privilege of sipping this cognac on board a NCL ship is a steep per-ounce price starting at $80 for a half-ounce (about a tablespoon) and $320 for two ounces. NCL isn’t the only cruise line to stock Louis XIII, however -- you’ll find it (and the same requisite high prices) on board many lines if you peruse the cognac menus.

In recent years, Princess Cruises has prioritized its wine program, expanding its selections under the direction of Master of Wine and Master Sommelier Doug Frost to complement the cruise line’s culinary offerings. The wine menu is where you just might find your next new favorite red or white, with some rare and wonderful vintages sprinkled throughout, including the Chateau Petrus Pomerol, a spendy $5,288 per bottle. Grapes for this Bordeaux wine are carefully selected and harvested by hand, and Wine Spectator called the 1996 vintage a "gorgeous, seductive wine. Full-bodied, with incredibly velvety tannins that go on and on."

Holland America highlights the picks of wine critic James Suckling, formerly of Wine Spectator, throughout its menus, including a special selection of his "rock star wines," also known as the best wines on board. Though currently none of the wine picks approaches the prices of some of the other cruise lines, as many wine industry insiders will tell you, price doesn’t always dictate quality. The list currently includes a sweet dessert wine, Château d'Yquem Sauternes 2015, and a fine Barbaresco, Falletto di Bruno Giacosa Asili Riserva 2007, both priced at $495 per bottle.

Fun-loving Carnival fans will find mostly modestly-priced drinks throughout the cruise lines menus, with the exception of your average bottle of Dom Perignon ($225). One unique feature of Carnival bar menus is the option of ordering large-format drinks, such as the 101-ounce beer tube or a cocktail served in a 60 oz. fishbowl at the RedFrog Pub. At $34.95 the fishbowl is one of the most expensive single cocktails we’ve found on a Carnival cruise ship -- but keep an eye out for specific times when they are discounted.

Now that we’ve cleared up the Kaiburr Crystal mystery onboard Disney Wish, it might surprise some cruise fans that the $5,000 is not the highest priced beverage throughout Disney’s cruise line. That distinction goes to the bottles of 1947 Chateau Cheval Blanc located in the wine cellars on the Disney Dream and Disney Fantasy in upscale adult specialty dining venue, Remy -- allegedly priced at a cool $25,000. You’ll know the bottles by their warped, time-worn labels. The wines are a showpiece for diners touring Remy, who hear about how this was the wine ordered by the food critic in the animated film, "Ratatouille."

Celebrity Cruises' ships have some of the best wine selections of any cruise line, keeping their cellars stocked with up to 40,000 bottles of wine at any given moment. Cruisers might know that Celebrity stocks the highly celebrated Screaming Eagle Cabernet Sauvignon, priced upwards of $4,500 per bottle, but there are some even more expensive off-list wines to peruse as well that go upwards of $12,000.

Over the years, rare selections have included Heidsieck Monopole Champagne 1907, recovered from a sunken ship; Château Lafite-Rothschild 1898; and Chateau Latour 1929.

For those with some money to spend, sipping a rare beverage at sea might just be in order for your next cruise.