You may also like
Dismiss
Top Southeast Asia Alternative Itineraries
Miami: The Playground of South Beach, Arts & Culture, and World-Class Dining
Best Middle East Shore Excursions
Sail Here, Not There: Avoiding Overtourism in Cruise Ports
One Great Reason To Try a Small Ship Cruise: Magnificent Ports of Call
Things to Do in Singapore Before a Cruise
Embarkation in Sydney: Cruise Terminal Parking, Address and Amenities
Best Cruise Ports for Wheelchair Users
48 Hours in Auckland Before or After a Cruise
20 Photos of Our Members' Favorite Cruise Travel Memories 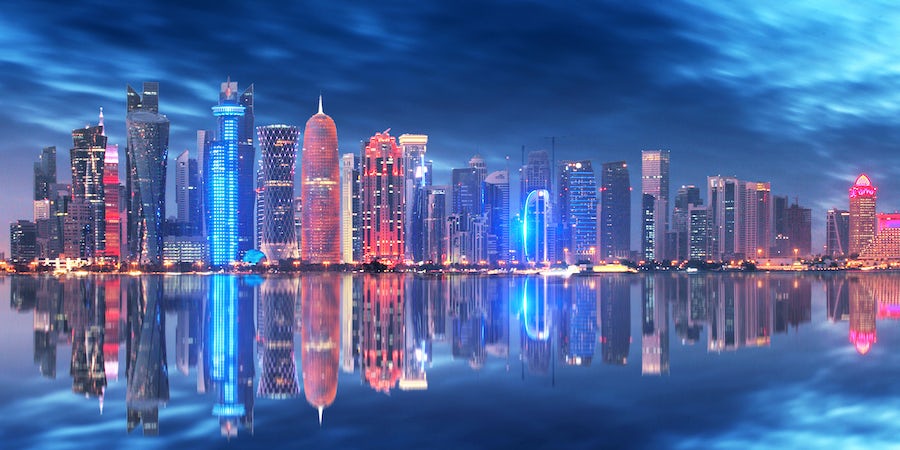 Why World Cup Qatar is the Next Big Cruise Destination: 8 Cool Things to See And Do in The Gulf State

Three MSC Cruises' ships including its newest -- MSC World Europa, which will also be christened here -- will be acting as floating hotels for fans attending the Fifa World Cup (November 20-December 18).

Cruise numbers are set to grow dramatically over the next two years so we went out there to give you the lowdown on what to see and do in Qatar ahead of the World Cup.

Dhow Harbour, dozens of traditional Qatari sailing boats bobbing in the breeze, sits next to the cubist Museum of Islamic Art. Just south, the cruise terminal gleams like an historic monument while to the north is the cityscape of exciting skyscrapers; in between are the bay and its Corniche waterfront.

Daytime cruises on the fabulous boats are impressive but a sunset cruise sees the striking red sun reflecting in the glass towers while a dinner cruise lets you sample local cuisine as the buildings light up.

2. The National Museum of Qatar is a Stunning Piece of Architecture

One of the world’s most remarkable buildings, the National Museum of Qatar opened in 2019. Designed by acclaimed French architect Jean Nouvel to look like a sand rose, a windblown sand creation, it is a sprawl of flat sandstone leaves inside and out.

There are no pillars or straight lines -- even the floor undulates like gentle dunes. Film of wildlife and desert life is projected on angular walls 50m long while historic artefacts and interactive displays tell life from the days of tents and goat farming to the 20th-century oil and gas boom. Even the gift shop is a gem, a contemporary cave-like structure using 40,000 pieces of wood and 3D modelling.

Racing along ridges, sliding down steep slopes and roaring along straights with only desert, sky and a hint of sea visible is breathtaking. Battered 4x4s -- in our case a delightfully dilapidated Lexus -- pick you up and head 50km south of Doha to where the desert meets the sea.

The road passes a city-like oil refinery (Qatar's second largest) and a sprawling gas terminal. After a stop for a brief camel ride the driver (ours in full Arab dress) roared up a sand trail and we spent half an hour heading south before dropping down to the Regency Sealine Camp, a beach retreat with sun-loungers and restaurant.

Our sunset dip was warmer than Florida at its best, the gas terminal's burn-off towers bright in the distance, and our included terrace dinner was Arabic, all flatbread, dips and stuffed vine leaves. Leaving after dark (although daytime visits will accommodate cruise timings) we sped along a flatter dune path at up to 120km an hour.

4. Go Shopping in the Souk

Souq Waqif has been selling clothes and spices, not to mention souvenirs, for more than a century. But much was destroyed in a 2003 fire so most of what you see has been reconstructed Disney-style, albeit in an evocative way.

A stroll through the narrow walkways can lead you to far more than shops and restaurants. There are stables with beautiful Arabian horses and views across the road to the Al Shouyoukh Mosque with its elegant tower; the camel pen, a spot where the animals have supper prior to market or racing; another spot for children’s camel rides; the falcon souk, an enormous shop where I saw 50-plus hunting birds, costing up to £2,000, hooded for the night. Around the corner is the Falcon Hospital where the birds get luxury treatment.

Doha Metro is an attraction in itself, reaching 100km per hour, one of the world's fastest driverless trains. The 76km of track, mostly underground, on three lines has been built from scratch to get football fans to the eight 2022 World Cup stadiums but it makes getting around the city and outskirts fun, easy and cheap (50p a go with 10-ride cards from easy to understand machines at every station).

The central interchange, Msheireb, is like a contemporary underground cathedral, vaulted ceilings with illuminated arches. The station -- just around the corner from hotels such as the Park Hyatt with its 21st-floor bar and terrace -- is only five stops from the airport. Other stations perch roadside with their unmistakable architecture, echoing a falcon's head with beak-like motif. The 37 stations take in most major attractions and the Red line rises on to stilts either side of the city for splendid views. Nearest station to the cruise terminal is a 40-minute mostly seaview stroll.

6. Splash the Cash at a Luxury Mall

Resembling a vast Parisian palace, Place Vendôme Mall is a shopping experience like no other, its central lake (connected to the Gulf 100m or so from the door) hosting regular shows from light installations and 200 dancing fountains. Only opened in April 2022, with 320 of its confirmed 560 names up and running, it wants to be the world's poshest shopping centre with Louis Vuitton, Dior, Prada and Cartier superstores eyeing each other across a domed atrium.

Clothing like you've never seen, although it’s not all couture crazy; if you tire of French macarons there's always McDonald’s, and one area is down to earth with H&M, even an M&S mini-mart.

It's in the new resort city of Lusail, created on reclaimed land, and can be reached in 30 minutes from Doha downtown via Metro and smart tram -- not even cash will get you a drive home in one of the Rolls-Royce-styled buggies that ferry shoppers from one jewellery store to another.

This 7km seafront promenade curves around Doha's perfect crescent of a bay, from the Museum of Islamic Art to the extravagant Hotel Park gardens, setting for the pyramid-shaped Sheraton Grand Doha Resort.

The walk passes several other parks, Dhow Harbour and countless viewpoints gazing at the array of very different high-rise buildings in one direction, back across to the cruise terminal in the other. A bit warm for a summer stroll but in winter when cruise ships will visit it’s more acceptable and as the sun dips it’s particularly beautiful, palm frond-like street lights curving from one end to the other.

8. See The Bigger Picture at the Museum of Islamic Art

The Museum of Islamic Art is a waterfront icon, 1,400 years of treasures not displayed in an historic setting but in a modern gem by IM Pei, creator of many iconic buildings, not least the equally waterfront but very different Rock & Roll Hall of Fame in Cleveland.

Sitting on an artificial isle connected by short causeway it is a stirring geometric take on traditional architecture. The interior, a breathtaking space over five floors with huge metal chandelier and glass walls opening up a panorama over the bay, was designed by Pei's collaborator on another iconic project, Paris’s Louvre pyramid. The museum is has recently re-opened after a year-long revamp with interactive exhibits alongside ancient treasures.