You may also like
Dismiss
10 Best Cruise Lines for Weddings
Disney Cruises Castaway Cay 5K
Top 8 Long Haul Short Break Cruises
Solomon Islands Cruise Tips
Orlando: Vibrant Hub That Serves Port Canaveral Goes Beyond Theme Parks
Best Shore Excursions in 30 South Pacific Ports
How to Save Money on a Disney Cruise
10 Things You Should Never Do on a Cruise Line Private Island
48 Hours in Auckland Before or After a Cruise
8 Perfect Cruise Line Private Islands for Every Type of Traveler 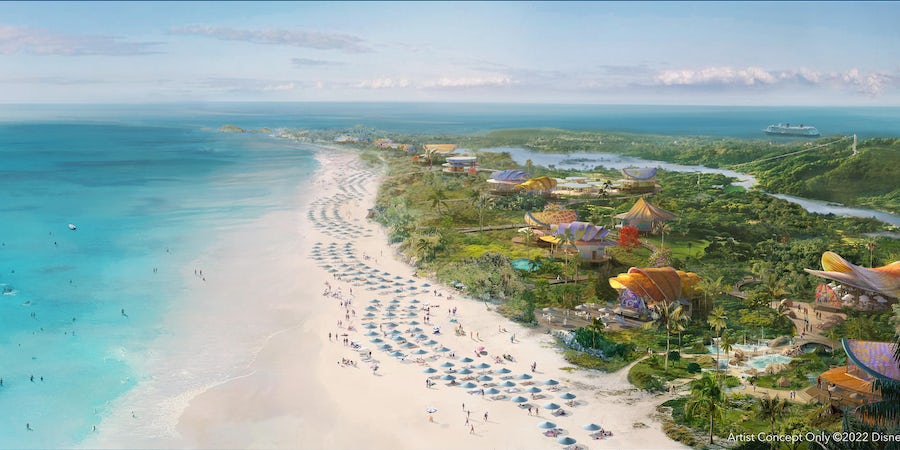 Disney Cruise Line is synonymous with family cruising, and it’s not just because of its beloved ships. Its private island, Castaway Cay in the Bahamas, is considered one of the best private island experiences in the cruise industry.

What's more, Disney Cruise Line will have a second destination in the Bahamas, known as Lighthouse Point, for its cruise passengers. The announcement was first made at Disney’s biennial D23 Expo fan convention in 2019, and plans have been in the works ever since on constructing Disney's newest tropical escape.

Here's what cruisers should know about Disney's Lighthouse Point.

What Is Lighthouse Point?

Lighthouse Point will be located in the Bahamas on the island of Eleuthera, appxorimately 114 miles southeast of Castaway Cay in the Caribbean.

"With three new ships joining our fleet, we thought this would be an incredible opportunity to add another unique destination to our ports of call," said then Disney Parks, Experiences and Products Chairman Bob Chapek at D23 Expo in 2019. "We looked all over the Bahamas and Caribbean for an ideal location that would enable us to create new experiences, while celebrating the culture of this amazing region."

In early 2019, Disney purchased the privately-owned Lighthouse Point and signed an agreement with the Government of The Bahamas that will serve as a guide for the responsible development of the site. Disney intends to develop less than 20% of the land and has committed to sustainable construction and environmental monitoring during building and once in operation. It has also donated over 190 acres of the property to the local government, and access to Lighthouse Point will also be allowed for local residents.

Yes -- the creative wing of the Walt Disney Company has been charged with designing Lighthouse Point, which should give cruisers some idea of the detail the line is committed to putting into the development.

As part of the initial design process, Rohde and his team set out on an extensive cultural tour of the Bahamas, visiting regional artists and local experts along the way. On the detailed itinerary were New Providence and Eleuthera island itself, to get a full appreciation of the local culture and to draw inspiration from everything from local art galleries to Junkanoo shacks.

"The Lighthouse Point site is so beautiful and so full of nature that we want to preserve this and use our designs to call attention to the extraordinary quality of the place itself -- a place of natural beauty with a rich and fascinating cultural tradition," said Rohde at the time.

“We will be directly involved in conservation efforts to preserve and protect the environment that creates this beauty, and we will be working with artists of every kind, much like we did with Aulani in Hawaii, to create a unique destination that is rooted in Bahamian culture and imbued with Disney magic."

That was before the global health pandemic and before Rohde retired from Disney after four decades at the company.

Nonetheless, Disney's Lighthouse Point project is still steaming ahead, and as recently revealed at the latest D23 Expo in 2022, work has started on the island.

We know Disney is continuing to collaborate with local Bahamian artists and advisors to craft a destination representative of the locale’s natural beauty and rich culture. A newly added detail, according to current Disney Parks, Experiences and Products Chairman Josh D’Amaro is that 90 percent of the site’s power will come from solar energy.

What Features and Attractions Will Lighthouse Point Offer?

What exactly will Lighthouse Point consist of?

Right now, we know that it will feature its own pier (an open-trestle design that eliminates the need for dredging as part of the line’s sustainability efforts). Right now, it is unknown if the port will be able to host more than one ship at a time. Castaway Cay only supports a single ship per day, so it stands to reason Lighthouse Point will likely only host one Disney Cruise Line ship at a time.

Not much more has been detailed beyond showcasing the area’s pristine beaches, as well as highlighting a purpose-built recreation center, dining opportunities, retail shops, aquatic playground and cultural pavilion.

How Will Lighthouse Point Differ from Castaway Cay?

Lighthouse Point will include more buildings than Castaway Cay, but what each will contain exactly is anyone’s guess at the moment.

Compared to the first’s few barge-installed water slides, the second may offer more in the way of water fun, but neither seem to feature any sort of dedicated swimming pools. Newer renderings released by the Company show an added turquoise pond that might pass for a swimming pool.

When Will Lighthouse Point Open to Disney Guests?

When initially announced in 2019, Disney had vaguely said construction might begin as soon as 2020 with potential completion by late 2022 or 2023.

Work has at least progressed on the site, but 2023 is looking less and less likely to be a viable timeline.

Following the recently launched Disney Wish -- Disney's first new cruise ship in a decade -- this year, the line plans to unveil more new vessels in the coming years. Disney Treasure is scheduled for 2024, with a third, as-yet-unnamed sister to follow in 2025.