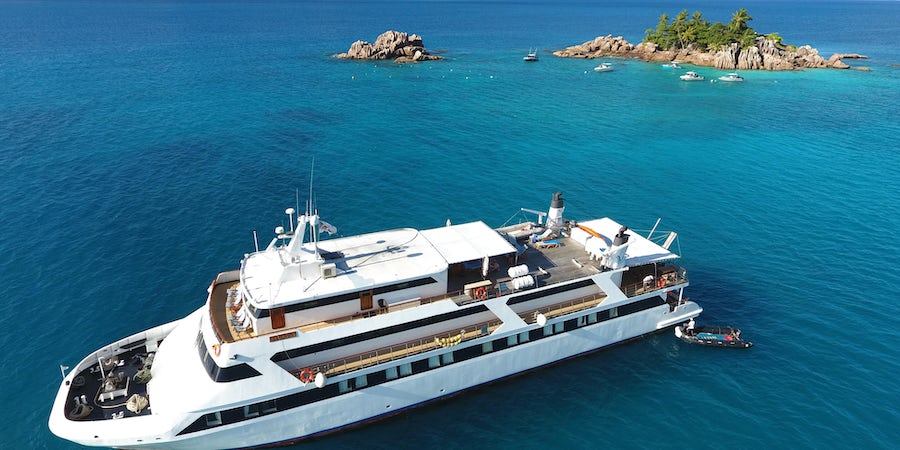 Pegasus in the Seychelles (Photo/Variety Cruises)

Did You Know You Can Cruise to the Seychelles? Here's Why You Should

All of this is true; but there's a caveat. A small ship cruise provides an alternative and more affordable way to experience this beautiful part of the world, an archipelago located off the coast of Africa.

Not only that, you move somewhere different everyday -- taking your top deck sunbed with you everywhere you go -- and see far more than you would staying in a resort and having to embark on lengthy excursions.

Out of 115 islands, only a handful are inhabited and the majority of Seychellois live on the three largest -- Mahe, Praslin and La Digue -- which is also where most of the hotels can be found. On a small ship cruise you will visit these three and more. These nimble vessels can sail between small islands and drop anchor in bays that larger cruise ships -- usually calling at Mahe as port of call on sailings to different Indian Ocean destinations -- can't reach.

How Do You Cruise to the Seychelles?

The main player is Variety Cruises, which uniquely sails to the Seychelles year-round, along with Ponant and Emerald Cruises.

Although the peak season for many land-based travellers is during the driest (and hottest) month of April, temperatures rarely drop below 75F and even during the rainy season from November to February you usually don't wait to have too long for the sun to put in an appearance. Whatever time of year you prefer, here are five reasons why you should take a cruise in the Seychelles.

Friendly and Flexible: Pegasus is a Perfect Way to Explore the Seychelles

Built in 1990, completely refitted in 1997 and refurbished in 2016, Pegasus (or Pegasos as it is called by Variety) might not be the newest ship in the Seychelles but it is an ideal floating base for discovering the islands. Carrying a maximum of 44 passengers, many of the cabins, which are all outside with windows, have recently been refreshed. They're clean and comfortable and, frankly, with so much time out exploring, swimming, snorkeling or simply lazing on beaches you don't get to spend much time in them anyway.

Glorious destination aside, the other thing that stands out is the crew. Greeks are known for their hospitality and family-owned Variety, which is based in Athens, makes a point of treating passengers like kinsfolk. Within a couple of days crew members will be addressing you by name and waitstaff will know your food and drink preferences.

The vibe on Pegasus is unstuffy and really friendly, with the captain, officers and cruise director dining with passengers and joining in the entertainment when local dancers and musicians come onboard. We have never sailed on a line where a crew member's birthday has been celebrated with passengers in the dining room (with cakes shared out between everyone) or where the open bridge policy extends to having a go at steering the ship (under close supervision, of course).

The ship's size means that itineraries can easily be adapted if need be. Strong winds meant we couldn't reach a scheduled port and beach stop. Instead the captain moored off a sheltered island and arranged for us to go ashore, with a coach to pick us up from the Zodiac, so we could go on a hiking excursion instead; all at no extra expense. A really nice touch.

In between tours, life onboard revolves around relaxing in the lounge and on the sun deck, tasty meals featuring Creole and international cuisine and daily briefings from the cruise director. In certain areas you can swim and fish off the back of the vessel.

You can't visit the Seychelles without encountering the coco de mer palm tree, famous for producing the world's largest nut -- weighing up to 60lb -- and being unmistakably male or female. The coco de mer palm tree only grows wild on the islands of  Praslin and Curieuse.  The best place to see them is the World Heritage listed Vallee de Mai, a dense forest with marked trails of different lengths, where we embarked on one of just two for-fee excursions during the week-long voyage on Pegasus.

As you wander through the lush landscape beneath these towering palms that grow more than 100ft tall, it's fascinating to learn about the gigantic nuts that take up to ten years to ripen (at the same time hoping you're not walking beneath it on the day it falls). Conversely, the national park is also home to the tiniest frog in the world, a sooglossid no bigger than a thumbnail, so while you certainly won't miss the coco de mer you would have to be super lucky to spot a frog.

Wildlife Encounters In the Seychelles Include Giant Tortoises

Another larger-than-life sight on the Seychelles is the Aldabra Giant Tortoise. Among some of the biggest in the world, they can reach up to four feet in length and weigh up to 770lbs. The now uninhabited island of Curieuse, a former leper colony, is one of the best places to see them. They roam wild at liberty, but the canny ones hang around the landing spot ready to be fed succulent leaves they can't reach and happy to have their heads and necks scratched by visitors. Elsewhere, you will spot them lumbering peacefully through the tidal mangroves.

Equally remarkable is Cousin Island, a protected reserve lying off Praslin and reached by an exhilarating high speed boat ride onto the beach with the guides double up as drivers and pick you up from Pegasus. As well as being an important nesting site for hawksbill turtles it is home to the Seychelles warbler, which almost became extinct in the 1960s. With no predators or fear of humans, white-tailed tropicbirds nest on the ground and you will often see them beside fluffy chicks that are equally unperturbed. It's impressive to hear about the conservation program, which also includes reef monitoring, on the island that is only open to visitors in the morning on weekdays.

As well as a visit to the stunning sweep of Anse Source d'Argent on La Digue, used as a location for the Tom Hanks' movie "Castaway", you can discover the extraordinary life of Briton Brendon Grimshaw on Moyenne. Although not stranded at the half-mile wide island, now the world's smallest nature reserve, he bought it in 1962 for $9,500 and lived there until his death in 2012. Dubbed a real life Robinson Crusoe, he devoted his life to restoring the overgrown island which had been abandoned for 50 years before he arrived.

He is buried there next to two pirates' graves that bear the inscription "Unhappily Unknown". Remote bays in the Seychelles were used as hideaways by 18th century buccaneers and it has long been rumored that there is treasure on Moyenne, and although Grimshaw dug for it none has ever been found.

Cruising the Seychelles is Refreshingly Uncommercial

If you're fed up of exiting through the omnipresent gift shop at every attraction you visit, you'll find it pleasantly different on the small islands in the Seychelles. Aside from gift shops on the larger island of Mahe, Praslin and Le Digue, many passengers commented on how uncommercial it felt on the rest of the islands.

We would have happily have bought souvenirs to support conservation work on Curieuse and Cousin but there were no retail outlets. On Moyenne we wanted to buy Grimshaw's book "A Grain of Sand: The Story of One Man and an Island" after seeing some copies in the small museum, but couldn't find anyone to ask. Belatedly, we found out they were on sale in the beach bar. Never mind, it's an excuse to go back and cruise in the Seychelles another time.