You may also like
Dismiss
Top 10 Seasonal Cruises for British Cruisers
Viking vs. Oceania Cruises
Drinking on the Douro: What to Sip on Your Portugal River Cruise
Volga River Cruise Map
Sail Here, Not There: Avoiding Overtourism in Cruise Ports
Monaco Grand Prix Cruise Tips
8 Exhilarating Shore Excursions
Mt. McKinley Princess Wilderness Lodge
10 Reasons to Stay in Seattle Before Your Alaska Cruise
Cruise Beach Bars We Miss in the Caribbean 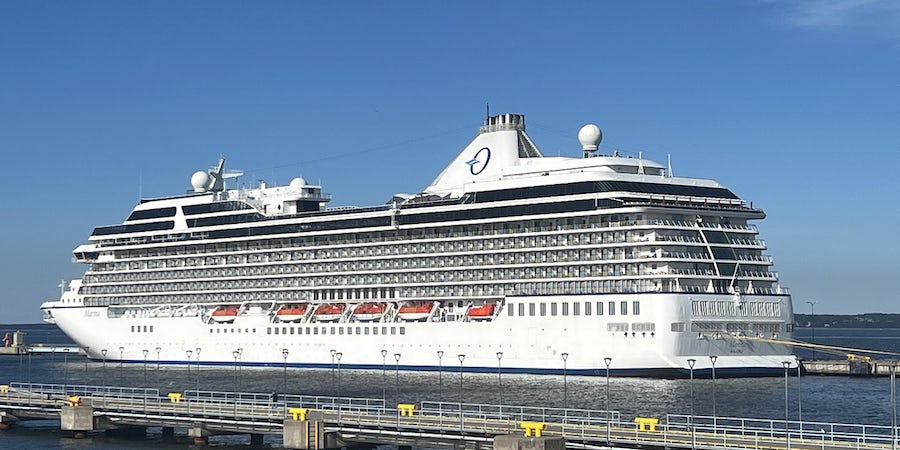 Why You'll Love a Baltic Cruise in the Summer -- Even if Ships Never Sail to St. Petersburg Again

The Baltics are the new Med. That's our cruise story for summer 2022 and we're sticking to it into next year.

It's a bold take. Mediterranean cruises have long been the European summer standby, far outselling the northern Baltic countries in popularity. Baltic sea cruise itineraries also had to undergo a massive rethink in 2022 after Russia invaded Ukraine, forcing cruise lines to drop the marquee port of St. Petersburg as a port of call.

Several of the Baltic countries -- Latvia, Lithuania and Estonia -- have suffered Russian aggression for more than half a century, and talking to people here gives you a first-hand perspective on how they cope.

Even the better known Scandinavia countries on the itinerary - Denmark, Sweden and Finland - are simply not as well-traveled as their Mediterranean counterparts of Italy, France and Greece.

After spending a week on Oceania's Marina, we're now on Team Baltic. Here's why we think you should be too, for the last few months of the 2022 season and looking ahead to 2023, 2024 and beyond.

Our Northern Realms cruise on Oceania began in Copenhagen, Denmark and will end in Stockholm, Sweden. In between, Marina is visiting five additional countries; one of them, Poland, was changed to Germany a few weeks before the cruise. If you're a country collector -- or simply take pride in exploring different places -- you'll love the variety.

Because there IS variety. For many people who remember Lithuania, Latvia and Estonia as former states under Soviet rule, there can be a tendency to group them together as a monolith. Once you're there, you'll know --- each one of these countries has their own language, customs, and outlook on life. That's true for Scandinavian countries too; the Finns are decidedly different than their Swedish and Danish counterparts. You never pick up these nuances unless you go -- and on a Baltic cruise, you're going to experience all of them.

If you like variety in your ports, it's hard to beat the Baltics. The itinerary stops at larger European capitals such as Helsinki and Stockholm, and our ship spent plenty of time there, with an 11 p.m. departure in the former and an overnight at the latter before we head home. If you want to take an excursion in the morning, and then go out at night to have dinner, there are opportunities to do so.

Don't sleep on some of the lesser capitals too. Tallinn in Estonia, with its lovely Old Town and architecture, has been on the cruise industry radar for a while, and our ship wisely added a late departure here too. The best surprise was Riga, the capital of Latvia. We predict the more people hear about this gorgeous city, the more often it will appear on Baltic itineraries. The city has more than 700 Art Nouveau buildings, and a Central Market that spans five gigantic hangars (the structures used to house German Zeppelins during World War I). Add an overnight here too, please.

We were also entranced by the smaller ports. The Danish island of Bornholm is simply idyllic and while in-the-know Swedes, Danes and Germans use it as a summer retreat, it has culinary, historical and active attractions (and the main city Ronne is the perfect place for that afternoon ice cream). The medieval city of Visby, Sweden, ended up being a favorite for many -- particularly as our ship showed up during a week-long Renaissance Fair-style festival. One of our last stops is the small Finnish port of Kotka, where excursions run heavy on active pursuits such as RIB boat rides and rafting (you could be lazy and go on a sailboat, which is what we are doing).

Even if you don't collect countries, seeing sites that are historically and culturally significant is a pastime that fuels any avid traveler. While the UNESCO World Heritage sites on a Baltic cruise might not date back as far as the antiquities that you find in Rome or Greece, we still found plenty that piqued our interest.

Take Hamburg, an easy bus trip from Kiel, Germany. Did you know that the northern German city, a powerhouse during the Hanseatic League, has the largest maritime warehouse district in the world? I didn't (and now many of them have been remade into cute cafés and restaurants).

Both the Art Nouveau buildings and Central Market in Riga have UNESCO status, as does the town center of Visby. Lectures onboard supplemented what we were seeing on land. You're going to have to work hard not to learn something if you take a Baltic cruise.

A Baltic Cruise Has Few or No Sea Days

If this all sounds action packed, it is: Most Baltic cruises have no sea days. That doesn't mean that you have to wear yourself out. We found that by selecting a mix of excursions -- some short three-hour ones mixed in with the longer six-hour jaunts -- we were able to do more. And of course, you can do as little or as much as you want. In most ports, Oceania provided a shuttle so you could come and go from the ship as you wished.

We took some time to get spa treatments, participate in evening trivia a few times and hang by the pool too. One of the best things about a port-intensive cruise like this is that you get a "taster" for new places where you might want to return. I already know that I want to cruise the Baltic again, and why not? People have been taking multiple Med cruises for decades.

The Weather in the Baltics is Outstanding

Here's where a Scandinavian cruise really stands out, especially as summer temperatures in Europe continue to climb every year. While people were sweating in the Med, on European rivers and even the British Isles this August, we enjoyed mild and sunny weather during our entire trip. We're talking 60s and 70s Fahrenheit, with low humidity (one day it did get up to 80, but it was quite bearable).

We all know that temperatures around the world are going up, not down. If you want to come to Europe, but don't want to get stuck in a heat wave, the Baltics are a pleasant choice.

Baltic Excursions can be Different and Unusual

Yes, you can take a walking tour in every port if you want. But I found a greater variety of interesting things to do on this cruise than on other itineraries. I could take this entire cruise again and do different things.

In Lithuania, we visited Plokstine, a former Soviet nuclear missile base that has been turned into a Cold War museum. For this child of the 80s who grew up scared by The Day After, it was a spine-tingling experience to go underground into a missile silo -- and realize that the Soviets had a warhead all lined up and aimed toward Prague during the uprisings there in 1968. But then I saw several other excursions that people did in port -- a Witches' Fable tour, kayaking -- and I realized that I could have been just as happy with multiple other options.

In Latvia, we took one of Oceania's Culinary Collection tours where we toured the Central Market to buy ingredients for an onboard cooking class. I've done plenty of shopping with the chef tours around the world. What made this one special was that we were each given money to purchase an ingredient from the vendors. Coaxing a smile from the sober-faced Latvian purveyors was an experience all its own (plus, you could do your own shopping; I'm still thinking about a very specific Latvian chocolate pastry).

The Baltic countries, where spending time outside is part of the culture, is a perfect place to do a mix of active and non-action excursions. Or combine them -- one excursion in Helsinki took passengers outside the city for a country ramble, followed by a traditional Finnish sauna.

Oceania is by no means the only cruise line plying the Baltic. We saw cruise ships from Norwegian, Regent, P&O Cruises, Saga and AIDA in various ports. In general, however, groups from our ship were the only ones we would see when we were on our excursions. There's nothing more annoying than having to dodge multiple tour groups, each leader carrying a lollipop -- and unfortunately that's become the norm in places like the Greek islands and major Med ports.

A Baltic cruise has never been a secret. But our ship, Marina, has only been half full this week, with 592 guests on a vessel that carries 1,200. We've heard anecdotally that Baltic cruises on other lines are also sailing at lower capacity. The good news for you is that as cruise ships are back to being full on other routes after the pandemic, you will enjoy a quieter and less crowded experience.

Learning About the Baltics Makes You a Better Global Citizen

Russia is the elephant in the room, of course. Baltic cruises traditionally spent three full days in St. Petersburg and that was considered the "crown jewel," so to speak, of the itinerary. And for some, the war in Ukraine may seem too close to comfort, causing fewer people to book a Baltic cruise.

That's a shame. We saw visible support of Ukraine throughout our trip, particularly among the three former Soviet-occupied countries, from Ukrainian flags in the Central Market to a tour guide in Lithuania who cracked anti-Russian jokes fast and furious.

In Tallinn, the Russian embassy was blocked with a fence full of anti-Putin and pro-Ukraine signs and messages of support. Our guide Gregor told us that even though Estonia is a poorer country within the European Union, it is contributing 1% of its GDP to helping Ukraine.

Gregor noted that since Putin came to power, Russia has invested millions in propaganda and ways to undermine democracy in Estonia, and other former Soviet states. "It wasn't a surprise to anyone here," he said of the war. "We have lived with this reality for 30 years."

The entire world, for the most part, is backing Ukraine. But the headlines that we read back in the States come into a different focus when you go countries that have suffered from Russian aggression, first hand. You can't cruise the Baltics and not come away with a deeper understanding and empathy for the people who live here. And that's something we need in this part of the world.