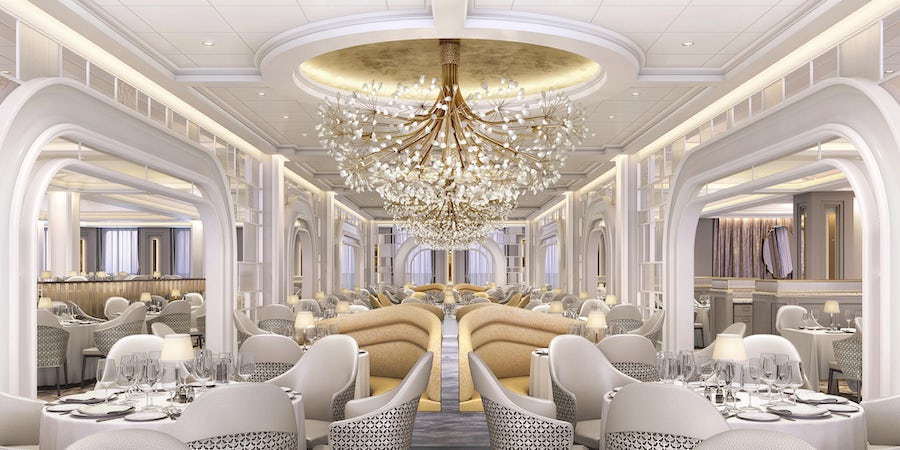 The small ship upscale cruise line, Oceania Cruises, has long been known as a sanctuary at sea for foodies who love classical food and wine; legendary French chef Jacques Pepin has been Oceania's culinary ambassador for years.

But that doesn't mean the line is standing still. Evolving and innovating to make sure that food and drink offerings are in line with what people want right now is part of what Oceania does, line president Howard Sherman said today in a press conference aboard Oceania's Marina.

The bold-face lineup of names gave a good idea of where Oceania is now -- and where the line is hoping to go with its Allura-class vessels; in addition to Vista, a sister ship will be coming in 2025.

Cruisers should expect Oceania's Vista -- the line's next ship, debuting in April 2023 with 1,250 passengers -- to have a few new culinary options (with some of them rolling out to the line's older ships too).

Read on for some highlights from the conference onboard Marina.

As part of the larger Norwegian Cruise Line Holdings company, Oceania got rid of its COVID-19 vaccine requirement earlier this week. Unvaccinated passengers can now sail, although they will have to take a COVID-19 test within 72 hours of embarking. Vaccinated passengers do not have to test, unless the destination requires it.

Lessening the requirements resulted in Oceania having a spike in bookings, Sherman and other executives said. "The word we're getting back is that it's overwhelmingly positive," Sherman said.

"We're seeing excellent bookings this week, better than last week. There were people on the sidelines waiting for further relaxation of the travel protocols," and now they are coming back, he said.

Sherman noted that the overwhelming majority of Oceania's guests are vaccinated and boosted already. "We're not talking about introducing a lot of unvaccinated people."

"The guests are welcoming this," Carter added. "We're seeing a spike…This really does feel like now there is a sense of normalcy in the cruise industry as a whole."

Oceania's Vista Will Have New Restaurants -- Plus a Bakery

Sherman and others noted that the team is always looking for culinary ideas and trends when they travel.

"The theme that persists is that of constant innovation," Sherman said of Oceania's offerings. "What was the finest cuisine at sea 20 years ago wouldn't be the case today."

An example: NCLH President and CEO Frank Del Rio called Semeraro from a hotel after enjoying a keto omelet. Semeraro brought it to Quaretti and the team, and within a few weeks, every Oceania ship had a keto omelet option.

One calling card of Oceania is that the ships have strong specialty restaurants, all of which are included in the fare. Vista will have a similar philosophy, but the names and spaces might change a bit.

Chief among the changes: Vista will not have a stand-alone Jacques restaurant. Instead, the Grand Dining Room will feature special Jacques Pepin dishes on the menu every night.

La Reserve, the restaurant dedicated to food and wine-paired meals on Marina and Riviera, will not be present on the Allura-class ships -- but the special menus, including the Dom Perignon one -- will be available as options in Privee, the ship's private dining experience.

New restaurants on Vista include Ember, an American-themed restaurant and Aquamar, a wellness-inspired restaurants. Favorites Toscana, Red Ginger and Polo will return, the latter with a more upscale focus. The Terrace Café buffet, the Grand Dining Room, Waves Grill with a new pizzeria, Baristas and a new French bakery round out the options.

The French bakery is clearly an area of excitement. During our voyage, samples of the new pastries were available at Barista's for all guests to try. Items included pink praline chouquette; French apple chausson; cranberry twist and various beignets; we can personally vouch for the Nutella version.

Quaretti said that Vista will debut with more than 400 new recipes onboard. "What's very important to me is simplicity," said Quaretti, who returned to Oceania this year after working at Viking for several years.

It's also important to make sure that each restaurant has its distinctive identity. Ember is a case in point, Quaretti said. The American restaurant had some overlap with Polo so the line is now upscaling the latter, with fancier ingredients such as Spanish beef and more elaborate presentation.

During a media luncheon, we were able to sample a few items from the reimaged Polo menu. We were impressed by the beef tartar, as well as the truffle cream cheese puffs that will serve as an amuse bouche.

Ember items we sampled included fried shrimp and a butternut squash risotto with pumpkin seeds and mascarpone truffle cream, which will be served as a vegetarian main course in the new venue. Finally, we barely had room but dessert lovers will not want to miss Ember's new triple chocolate brownie with salted caramel and vanilla sauce.

With Vista, Oceania will also be putting a new focus on its cocktail program, keeping up with trends in the marketplace.

"One of the best things about my job, besides drinking, is research and development," Oancea said. "We study drinking habits. What do guests prefer, what do they order onboard the most?"

A cocktail showcase held onboard featured new drinks in the casino bar, which will now be called the Casino Mixology Bar. The Monkey Business features Monkey Shoulder whiskey, banana liqueur and egg white, while the Picante has tequila silver, apricot liqueur, honey syrup, chili and coriander.

Ember's cocktails seemed heavy on bourbon, while Red Ginger drinks were light, with flavors such as elderflower and lychee syrup. The line also has cocktails made with a "flavor blaster," which produces a fun bubble that dissolves in a puff of smoke when it hits the drink.

Martinis is traditionally the most popular bar onboard Oceania ships, and for Vista, that shouldn't change. A new series of new cocktails made with Mermaid gin from the Isle of Wight will be introduced, some inspired by old Hollywood, Oancea said.

Mocktails and non-alcoholic cocktails has been a huge trend on land, and Oceania is jumping into it with a full menu for its wellness restaurant Aquamar. Using zero-proof spirits created by Lyre's, the line debuted several mocktails, including a "no-groni" made with Lyre's dry London spirit; Lyre's Italian orange and Lyre's aperitif rosso. Non-alcoholic wines will also be served.

Other tidbits from the drink side: Ember's will feature American-brewed craft beers, such as IPAs and other beers from Miami, New England and other regions. Red Ginger will have new cocktails created to go with its Asian lunch menu. And for lovers of the grape, Oancea is adding 75 new wines to Oceania's already extensive wine list.

While much attention has been given to the forthcoming Vista on this sailing, the line is also excited about the upcoming refurbishment to its two existing larger ships, Marina and Riviera. Riviera enters drydock on November 17, 2022, while Marina will get its own refit in the fall of 2023.

"You won't recognize them," Semeraro said. "It will be a completely different room."

In lower category rooms, the bathtub will be taken out of the bathroom and a big shower installed in its place, he said. USB outlets will be placed near the beds. Meanwhile in the Oceania and Vista suites, all of the "soft goods" -- curtains, carpeting, etc. -- will be changed.

Around the ship, Waves Grill will get a new pizzeria -- an addition that will carry through to Vista. The idea is to offer a casual place for people to eat on those long summer nights in Europe, Semeraro said. The milkshake/ice cream bar will also move from the side of the pool deck to be front and center.

"You will love what you see at the end of the year," Semeraro said.