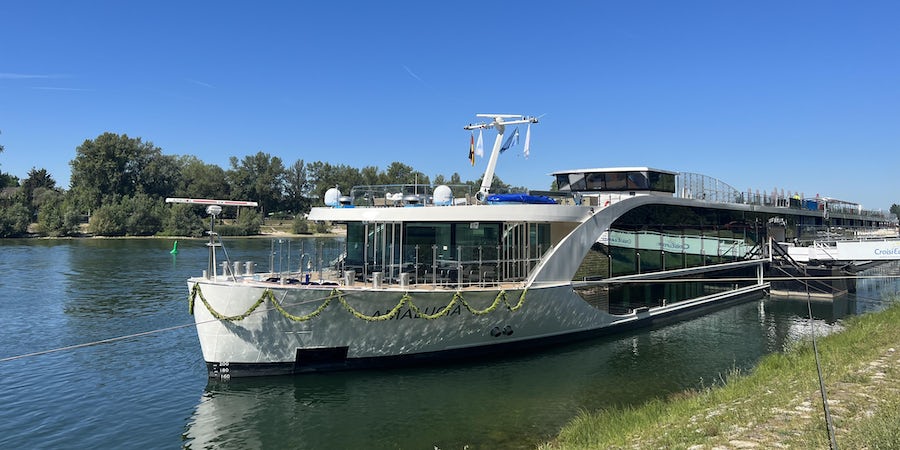 River Cruising Aboard AmaWaterways' AmaLucia: Why 2022 Could Be The Best Year to Sail the Rivers

In fact, as I sailed AmaWaterways newest European ship, AmaLucia, from Amsterdam to Basel last week, everything felt refreshingly normal -- albeit a somewhat new and more relaxed normal.

This year, it's even easier to hop aboard a European river cruise. Gone are many of the scattershot and constantly evolving COVID-19 testing and masking requirements that made travel such a hassle in 2021. Back are the full range of services, excursions and activities, but on a more intimate scale.

Like most lines catering to North American travelers, AmaWaterways President and co-Founder Rudi Schreiner said his Europe ships are sailing at about three quarters of total capacity this summer, and he expects to end the season at about 80% capacity.

That’s enough passengers onboard to offer the social experience that many cruisers seek, but few enough to never feel crowded or like you needed to rush to make a special dinner reservation, secure a prime viewing seat on scenic cruising days or worry about whether the excursion or spa appointment you want has already filled up.

And while some of our itinerary's most popular cities like Cologne and Rudesheim were busy, there were still noticeably fewer groups clogging popular tourist spots. In Strasbourg, France, I biked alongside the locals through the city, enjoying the uncrowded streets and outdoor markets. And Amsterdam, which pre-pandemic was one of the poster children of overtourism, was delightfully quiet when I strolled the town on a Thursday afternoon before setting sail.

Even Floriade, a once-a-decade horticulture show that is being held this year in

Amsterdam, was surprisingly empty. The morning our group of about a dozen arrived, we had the place almost to ourselves, wandering through the quiet gardens and exhibits focused on sustainability and hopping onto the cable car that gives an aerial view of the grounds without any wait at all.

The lower-than-normal passenger numbers have also provided a bit of relief for the river cruise lines themselves, which, like all service sectors, are struggling to find enough workers.

"I am actually somehow OK that we are not running full," Schreiner said. "It has a lot to do with service standards. It is hard to go back on the service side, getting all the people. There is a major issue around finding enough people and so on."

"I will say overall I’m happy with the season and the expectations," he said. "It’s good to be back with all the ships. It’s good to have the crews back."

The pandemic shutdown in 2020 and the gradual ramp up also gave lines the opportunity to make some onboard changes and develop new itineraries and excursions.

The most notable change on AmaWaterways: the permanent elimination of the buffets that are traditionally offered on upscale river cruise lines in addition to full-service menu options at breakfast and lunch.

It’s a change Schreiner said he had been wanting to make for a long time, in large part because of the tremendous food waste associated with self service areas that, from a presentation standpoint, must be kept fully stocked even if only a few straggling diners are left in the restaurant.

But offering only menu-driven service requires a different level of training for dining room staff, and a re-education of sorts for guests who are used to sampling a wide variety of dishes from the buffets or being able to grab snacks from a self-serve table in the lounge between regular dining room hours.

Although I heard a few people grumbling about the shift, Kristin Karst, co-founder of AmaWaterways, said guest surveys show 95% of guests are happy with the change.

As someone who was leery long before the emergence of the global health pandemic of the potential for germ spreading at buffets, I’d have to agree with them. There still were limited self-serve options, like pre- and post-breakfast pastries in the lounge for both early and late risers. And between lunch and dinner, if you wanted a few cookies, peanuts, an afternoon tea tower-style sampling of finger sandwiches and pastries, hummus or other tapas, all you had to do was ask.

The menus and paired wine offerings still changed daily, offering a variety of both new and always-available choices like burgers and pizza. And the staff was always at the ready to make substitutions, meet special off-the-menu requests or simply bring seconds or thirds to guests who wanted to try more than one appetizer, entrée or dessert.

And while the guest count may be down from the pre-pandemic norms averaged about 95% of capacity, AmaWaterways offered as many or more excursion options and onboard activities as before the pandemic. That meant smaller groups, even the potential for private excursions, like the morning the bike guide was at the ready for a ride through the Kaiserstuhl vineyards around Breisach, Germany, even though I was the only one who had signed up for that excursion.

Perhaps the biggest sign of a return to normalcy was the focus on water levels over Covid protocols, which have dominated the cruising and travel landscape for the past two years.

The week we set sail, water levels in the Rhine were getting precariously low because of hot, drought conditions, prompting some lines to cancel or reroute sailings. Emerald Cruises, for instance, altered its post-christening sailing of the Emerald Luna from the popular Amsterdam-Basel route to the Dutch waterways and Belgium.

Fluctuating water levels are a normal part of river cruising. And AmaWaterways, Schreiner said, had plans in place on the Rhine and Danube to do ship swaps if water levels get too low.

In those instances, sister ships sailing in opposite directions stop before the low water spots and guests’ belongings are transferred to similar cabins on the other ship while they are on excursions. After the tours, they are taken to the new ship to continue their voyage.

We made it through the low spots, although the need to sail more carefully, combined with repairs on one of the key locks on the Rhine, slowed down our cruise, meaning we spent more time on board and less time in towns than usual.

That was fine with me. AmaLucia has plenty of comfortable lounge chairs, couches, tables, even a pool, on the sundeck. And to me, just relaxing in casual luxury and taking in the views of the European countryside, castles and villages is one of the highlights of river cruising.

There are also always a few unique surprises. One day we spotted three camels, yes camels, in the Netherlands. Another day there was a huge herd of baaing sheep on a beach in between scores of campers.

Of course, getting to the cruise meant flying into Amsterdam's Schiphol Airport, one of Europe’s most problem-plagued airports this summer. I made sure to do carry-on only, and then braced myself for the worst.

Fortunately, luck was on my side. All of my flights ran right on schedule. And while there was a fairly long line to get through passport control in Amsterdam, it was far from the first time I’ve been caught in a sea of humanity at Schiphol. On my return, the line was the shortest I have ever encountered in Amsterdam.

Other passengers on my sailing were more proactive and avoided major European hubs altogether, taking the train from Basel to Zurich to get non-stop flights back to the U.S. – an option I wish I had considered over the 6 a.m. flight I had to catch from Basel to Amsterdam in order to catch a same-day international flight back to the States.

Overall, I found that with some proactive planning, a little bit of luck and a flexible attitude, 2022 might just be the perfect year to explore the continent from the relaxing -- and uncrowded -- comfort of a river ship.