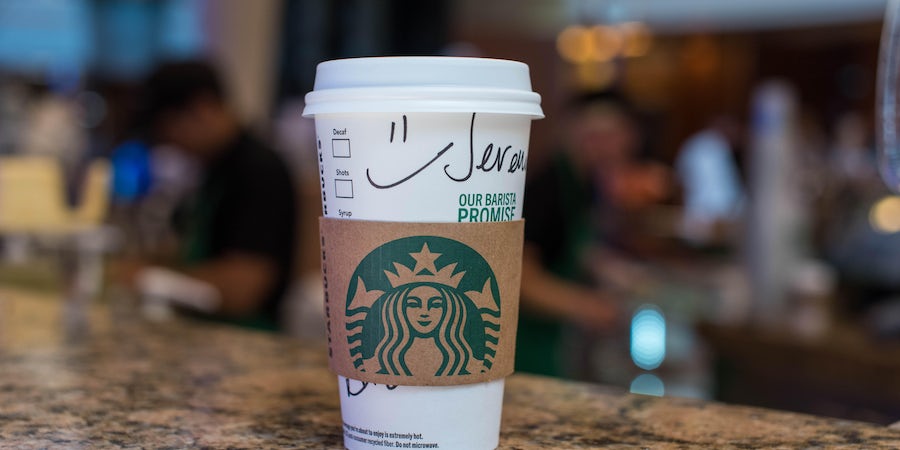 Starbucks on Oasis of the Seas

Where Can You Get Your Starbucks Coffee Fix on Royal Caribbean? We Spill the Beans

Don't worry, you can still get your Starbucks coffee fix when you're onboard one of the 26 ships in the Royal Caribbean fleet.

The Royal Caribbean-Starbucks relationship dates back more than a decade, when the cruise line became the first to partner with the coffeehouse chain in 2010. At the time, RCL offered a storefront experience on Oasis of the Seas.

Additionally, starting this year, passengers can also get Starbucks beverages at coffee locations onboard Royal Caribbean ships, namely Café Promenade, Café Latte-Tudes and La Patisserie. The rollout began in April of this year on the Café Promenade onboard Oasis of the Seas.

Is Starbucks Free on Royal Caribbean?

That caffeine jolt comes at a price: Starbucks is not free on Royal Caribbean.

The standalone Starbucks stores onboard Royal Caribbean ships operate as a specialty dining venue, so their items are not included in your cruise fare. Expect these stores to resemble your local onshore local Starbucks, except you'll need to use your SeaPass card to purchase any beverages or pastries.

Alternatively, you can also use the Starbucks app to pay for your cuppa joe onboard. Ditto for Starbucks gift cards, but you can't purchase these on board; so if you plan on using one, you'll need to bring it with you.

It's also worth noting that while passengers can use their Starbucks Rewards Program onboard to receive a star for each transaction, in-store benefits and reward redemption options are not available at these standalone stores.

Café Latte-Tudes and La Patisserie are also considered specialty dining venues, so your SeaPass card will be your ticket to your Starbucks beverage of choice. And while Café Promenade is considered one of the restaurants included in your fare, the Starbucks beverages on offer -- espresso-based drinks, Teavana products and the basic frappucinos -- fall in the category of specialty coffee, and therefore come with a price tag as well.

As with most cruise lines that aren't all-inclusive, Royal Caribbean offers a bevy of drink packages allowing passengers the option to select a plan that best suits their preferences. Whether or not Starbucks is included in your package depends on where you buy it.

As mentioned earlier, the only ways to get your morning java at the onboard Starbucks standalone stores is by using your SeaPass card, your Starbucks app or Starbucks giftcard. The drink package does not cover you here.

When it comes to Café Promenade, Café Latte-Tudes and La Patisserie or other non-Starbucks standalone cafes that serve Starbucks products, your drink package can come in handy.

Royal Caribbean's two top drink packages -- the Deluxe Beverage Package and the Refreshment Package -- both include premium coffees and teas. The Deluxe Beverage Package is Royal Caribbean's top of the line package, entitling passengers to unlimited cocktails, spirits, liqueurs, beer, wine (by the glass), fountain sodas, bottled still and sparking water and fresh-squeezed juices. You also get a 40% discount on wines under $100 and a 20% discount on wines above the $100 price tag. But note: drinks priced higher than $13 will not be included in the package. Same goes for drinks served in a souvenir cup or served inside a fruit, but a portion of the price will be subsidized.

The Refreshment Package, on the other hand, will cover all non-alcoholic beverages. Prices for drink package vary from ship to ship and sailing to sailing but expect to pay between $48-$79 per guest, per night for the Deluxe Beverage package if you purchase before your cruise (the cost will be higher onboard). The Refreshment Package price hovers at $29 per guest per night.

If you're only interested in java, another alternative is to purchase Royal Caribbean's Café Select coffee card. Priced at $31, this card works differently than the drink packages as it entitles you to 15 shots of espresso-based specialty coffee. The barista will punch your card every time you use it and yes, double shots of espresso will result in two punches to your card.