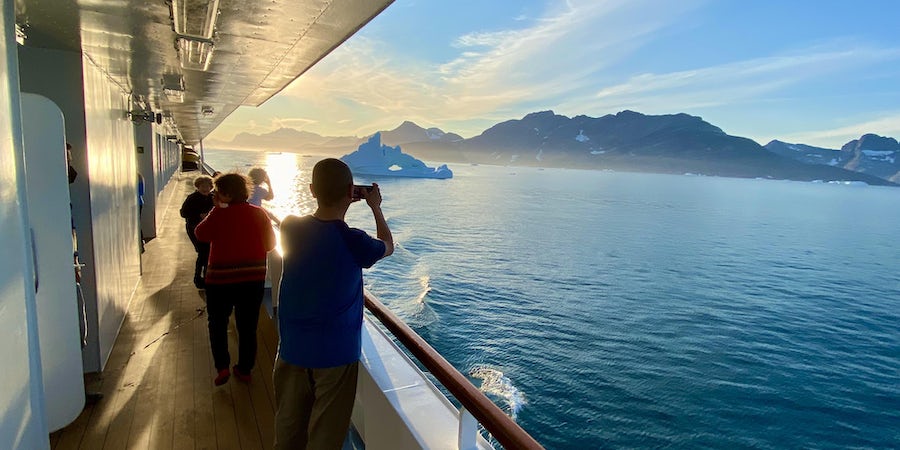 5 Reasons Why a Greenland Cruise Should Be on Everyone's Bucket List: Just Back From Quark Ultramarine

Love all things cold, and looking for that Where To, Next destination? It's time to add a Greenland cruise to your bucket list.

Greenland is an absolutely gorgeous place, blessed with incredible physical beauty. The world’s largest island, it’s an independent territory within the Kingdom of Denmark. Roughly the same size as Mexico, about 80 percent of the land area is covered by the world’s second-largest polar ice sheet. It’s home to fewer than 60,000 people, about 90 percent of Indigenous descent.

In the summer, Greenland's fjords are verdant and lovely. The arctic tundra blooming along cold blue waters, under craggy, snow-capped peaks, a hanging glacier seeming to appear on the heights, no matter where you look.

The destination has appeared on more itineraries in recent years; Princess, Lindblad, Viking, Holland America, Seabourn, Silversea and others sail there. But while Greenland has often been a component of larger itineraries—often combined with Iceland, to the east, or Baffin Island in Canada, to the west—the expedition powerhouse cruise line Quark’s new Southern Greenland Adventure itinerary is unique among expedition companies and cruise lines.

Designed in consultation with local, regional and national partners, it is the first and only trip to sail exclusively in the territory’s southern fjords. It offers options on land, sea and sky, opportunities to walk and bike and paddle where no humans (or, at least, very few) have gone before. And best of all, the voyage takes place on the line's newest expedition ship, Ultramarine.

Here are five reasons why you should start planning a trip to Greenland, right now.

The Expedition Ship Ultramarine is Perfect for Greenland's Landscapes and Excursions

This ship, which launched in 2021, is unlike anything Quark has offered before. An expedition company focused on the polar regions, they were previously known for trips aboard rough-and-ready ships like the Kapitan Khlebnikov, a Soviet-built icebreaker. Ultramarine is something entirely different. Purpose-built for the harsh conditions of the Arctic and Antarctic, it includes a number of features tailored to the service of big-time adventures there.

And the biggest? The helicopters. Two twin-engine Bell helicopters sit on the top deck, ready to shuttle guests on a number of different excursions. Everyone gets to heli-hike, with the landing sites often determined the morning of the trip, pilots and expedition leaders taking reconnaissance flights to find places safe to land dozens of guests. From there, guides take you across the tundra, pointing out unique vegetation and giving you the time to just enjoy the vast vistas. The choppers are also big and strong enough to carry bicycles and inflatable kayaks, and take mountain bikers and alpine paddlers on excursions, as well.

But the smaller touches on this vessel impress as well. A water-level “zodiac hangar” allows for quick deployment of the ship’s 20 zodiacs. This, combined with twin ready-rooms, make disembarkation quick and easy, relieving the bottleneck that often plagues expedition ships. (Anyone who has donned heavy waterproof gear, only to sweat it out while waiting for the crew to call their zodiac group, will appreciate this.) A wrap-around deck on Level Five is the perfect platform for viewing wildlife, and doubles as a walking track for those looking to grab a few laps after dinner. And a full-service spa with sauna—the latter with floor-to-ceiling windows, overlooking whatever lovely landscape you’re currently passing—is the perfect place to end a busy day out on the ice.

Greenland's Villages are Small and Unpretentious

The Greenlanic Inuit have lived in this harsh environment for thousands of years, and they maintain a number of age-old traditions in their day-to-day life. My voyage included a call at Aappilattoq, a tiny village of about 80, sheltered behind a rocky harbor. Not jaded at all, locals welcome visits by ships with genuine excitement—perhaps only a half dozen come through every year.

My morning there was busy with all sorts of unpretentious activities. A Greenlandic rock band played an open-air show, with lyrics in the local language, which is spoken by just a few thousand people. Guests from the ship played a soccer match against the village’s team on a rocky pitch under twin mountains. And a talk on hunting sprawled into a number of topics, guests getting the chance to ask about all aspects of life in this remote place in a genuine, face-to-face conversation.

Honestly, this must be one of the most beautiful places on earth. Near Qassiarsuk, velvety fields of green grass feed herds of sheep on farms right near Viking ruins left by Erik the Red. Jagged mountain summits remain snow-capped, like something out of a romantic painting, all through the summer. Waterfalls cascade down cliff faces for hundreds of feet, forming rushing streams that cut through the tundra, making their way to the sea. Even the hardy tundra is beautiful, blooming with juniper and arctic mouse-ear and wild blueberries.

The Fjords of Greenland are Extensive and Unexplored

While we usually think of Norway (or maybe Iceland) when it comes to fjords, Greenland has one of the most extensive fjord systems in the world. And, because of its remote location, these remain largely unexplored. The main waterway on my voyage was Prince Christian Sound, which runs about 100 kilometers, connecting two parts of the Arctic Ocean, the Labrador Sea and the Irminger Sea. It is girded by steep cliffs, as well as glaciers, with dozens of other fjords branching off it, lined by the islands of the Cape Farewell Archipelago. It all feels like terra incognita, the water and land beckoning exploration.

The Ice Looks Otherworldly From Sea -- and Air

Greenland’s most distinctive feature is its (rapidly melting) ice sheet, which covers 1.7 million square kilometers, and stretches almost 3,000 kilometers from north to south. The absolute highlight of my trip was a helicopter trip where we landed right on top of it. Disembarking, I spent a couple hours examining the narrow crevasses (cracks caused by the weight of everything shifting down) as well as cold streams emptying into a moulin, disappearing into the blue shaft and out of sight. The view from the chopper was unforgettable, the white and blue of the sheet stretching as far as I could see, past the horizon.

But it’s the million small ways, too, that make Greenland’s ice special. The territory has so many glaciers—some of them connected to the ice sheet, some not—that many, or even most, don’t have names. Hanging glaciers glisten from on high, in every direction. And during my seven days on board, we passed literally hundreds of icebergs, some just freshly calved, others an electric blue, a few as big as floating mountains, a couple with archways. Enough to entertain for hours, if you just walked outside and had a look.