You may also like
Dismiss
Alaska Cruisetours: 6 Things You Need to Know
7 Places to Cruise Without a Passport
8 Exhilarating Shore Excursions
Top Cruise Destinations 2020
Why There's Still Nothing Like a Day on the Water
Alaska Towns, Cruise Lines Prepare for Launch of 2021 Summer Season
6 Tips For Cruising to Alaska on a Budget
Will the Alaska Labor Shortage Affect Your 2022 Cruise? Probably. Here's How to Cope
What Kind of All-Inclusive Cruises Can You Find In Alaska -- and Which One Is Right For You?
The Great Alaskan Lumberjack Show in Ketchikan: An Alaska Cruise Excursion 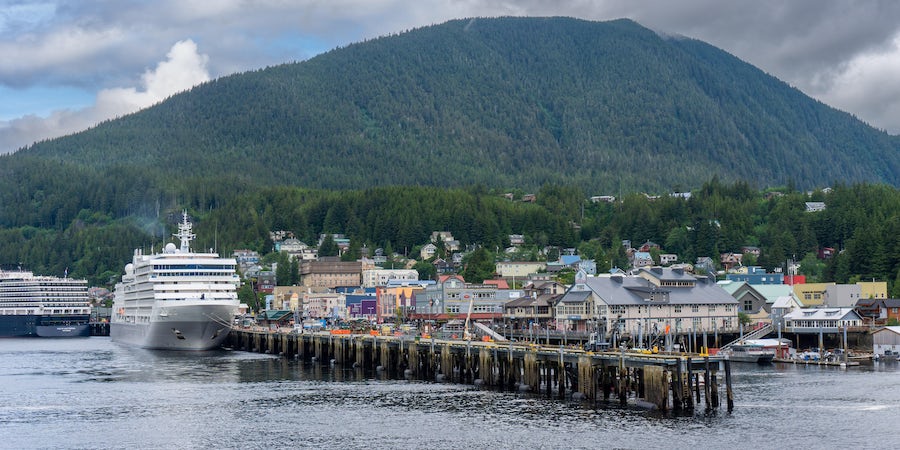 With the first full Alaska cruise season since 2019 well underway, Cruise Critic has been keeping tabs on the popular cruise destination that is enjoying a healthy recovery, thanks to its "close-to-home" nature for cruisers in the United States and Canada, and its bucket-list status for travelers coming from abroad.

Yet the problems that have plagued tourism globally, such as supply chain issues and not enough workers, are still noticeable in Alaska. Many towns, villages and cities in Southeast Alaska are accessible only by sea or air, and goods need to be shipped from the Lower 48 on cargo planes or container ships. Plus the traditional reliance on an out-of-state seasonal tourism workforce has made the reliability of certain shore excursions uncertain.

Cruise Critic recently returned from a cruise to Alaska and found that while the State delights now more than ever, passengers are still facing some headwinds in The Last Frontier. Here's what you should know.

The Case of the Missing Chowder (Or, Supply Chain Problems Persist)

If you really want to get the pulse of what's happening in any given Alaskan port of call, your best bet is to amble up to the bar, where conversation flows freely.

Our ship arrived in Icy Strait Point at Noon, and was in port until 8 p.m. Not wanting to deal with the initial rush of folks going ashore, we wandered up to the Crab Shack in a little after 4 p.m. to find most of the food completely gone, and the Cannery Red Ale -- made just for Icy Strait Point by Denali Brewing -- drained (there were still other Alaskan brews on tap, however).

"We've actually doubled the amount of food we make," our bartender told us as she poured an alternate pint. "When the season started, we were running out at 1:30 (in the afternoon)."

The same situation presented itself in Skagway, where Skagway Brewing Co. was already sold out of their famous chowder by 3 p.m. on a two-ship day where both vessels would be in port until late evening. For businesses, balancing demand when it isn’t clear how many passengers will be arriving on each ship has been a struggle.

"Royal Caribbean seems to be doing better than most," one local connected with the tourism industry told us in Juneau. "They seem to be sailing nearly full. Some lines, though, are coming in at fifty and sixty percent."

The Juneau Empire newspaper confirmed that. An article published in the July 16-17, 2022, edition indicated that most ships arriving in port were averaging about 68 percent capacity, depending on the line and sailing date.

Still, the general feeling in every port we visited was that cruises -- and tourism -- are back. "If you walk the docks, you couldn't tell the difference between 2019 and 2022," Harbormaster Matthew Creswell told the Empire.

The Empire also hinted that locals might prefer the cruise tourism numbers to stay where they are, rather than rising to 100 percent of total ship capacity.

The behavior of cruise tourists, after a three year-absence for the most part, is also hard for local businesses (and passengers) to gauge. While Skagway Brewing Co. was packed to the rafters, nearby Klondike Brewing on Second Street was populated by only by handful of passengers and locals.

Throughout our voyage, businesses and shops were either so full it became tough to move around, or surprisingly empty. There's a sort of ebb and tide to where passengers go. In Ketchikan, Parnassus Books was jam-packed 15 minutes prior to its scheduled opening time, only to empty down to just two patrons ten minutes later. The herd had seemingly moved on.

Supply chain problems have also had a direct impact on many Alaskan businesses. When Cruise Critic visited the state in the springtime, prior to the start of the 2022 cruise season, Tracy's Crab Shack -- a pierside Juneau mainstay -- couldn't source local king crab due to the cancellation of the season in 2021. Tracy's is still serving delicious crab -- it just isn't from as close to home as it normally is.

"We've done our best to stay true to what we've always believed in," owner Tracy LaBarge told Cruise Critic in April, "which is always selling Alaska seafood, but we were pushed this year and, in order to stay in business, we had to do what we had to do."

The Seasonal Worker Is Back

"Are you from here" is the question every passenger invariably asks of their tour guide. And, in Alaska, that answer is almost always, "No."

Alaska has long been dependent on a pool of young, seasonal workers that come up from the Lower 48 for six months out of the year to drive motorcoaches and lead tours through the heart of Southeast Alaska.

Last year, during the truncated 2021 cruise season, this pool of transient worker was completely absent. It wasn't uncommon for your tour boat to be driven by the guy that owned the company, or for a pint to be pulled by the owner of the bar, usually one of only a few staff left. Every tour operator we encountered last year was, to a person, a local Alaskan who lives there year-round.

That hasn't been the case this year.

In Skagway, our coach driver was an affable fellow of about 25 --we'll call him Richard -- who knew the basics of Gold Rush lore. But he also spent an equal amount of time talking about the university he was attending "back home", the program he was taking, and his career ambitions. He made it very clear to passengers this was just a temporary gig for him; something to while away the summer months. He got us where we were going, safely, but we learned less about Skagway and more about Richard during our coach tour.

While you're likely to meet locals in every port of call (Icy Strait, for example, provides jobs for residents of the nearby Tlingit village of Hoonah), the level of knowledge you're likely to get from the seasonal guides can vary wildly. Some we encountered were well-versed in local history and knowledge, while others struck us as having read the guidebook once, committed it to memory, and were pressed into the job.

That variance in quality is because Alaskan businesses are still having a vicious time recruiting enough staff. And that is creating problems for cruisers both on and off the ship.

Because of this, many tour operators are running with a bare-minimum staff. And when one of those staff members gets sick, or has a family emergency, it leaves operators without a suitable body to drive that bus or guide that tour.

That results in tours being canceled. Throw in the usual Alaskan problems like weather that can derail flightseeing tours, and chances are good that at least one of your pre-booked Alaskan shore excursions won't go ahead as planned.

On our Carnival Spirit journey to Alaska, the Shore Excursion team prepped passengers early on that the unexpected happens. A letter placed in passenger cabins on embarkation day warns of adjusted departure times, tour descriptions and amenities, and advises passengers with any issues to contact the Shore Excursion department onboard.

Out of the three tours we pre-booked, only one, in Juneau, was cancelled due to low participation numbers. Expect this to be a thing going forward: with the price of gas skyrocketing, running a fuel-hungry motorcoach (all of which, in Alaska, seem to have been purchased in bulk back in 1990) with less than a full complement of passengers is something most tour operators just aren't going to do.

Another pinch-point is completely out of control of the cruise lines: a landslide in June that sent debris raining down on Discovery Princess berthed at Skagway's popular Railroad Dock triggered a closure of the pier for the remainder of the season, after a report created by the geological firm Shannon & Wilson noted that there is "a significant risk associated with complete failure" of the cliff face, not on the south side where the latest slide occurred, but on the north side, where two separate slides occurred in the fall of 2017.

"It is our opinion that the slide mass will eventually fail and the consequences of such failure will be catastrophic in nature with significant risks to life and property."

With the forward Railroad Dock berth closed for the remainder of the 2022 season, Princess -- the primary cruise line utilizing that docking space -- is choosing to send ships elsewhere as space permits. Vessels are instead calling on Haines, Icy Strait Point and Sitka.

The benefits of cruising Alaska, however, still outweigh any issues that may crop up this season, particularly for those who are willing to 'roll with the punches'.

Firstly, port changes can and do happen. Expect them. Know that wherever you are docking will provide a slice of Alaska that is unique in its own right. You might trade the Gold Rush history of Skagway for the former Alaskan capital of Sitka, with its interesting mix of Russian and Tlingit influence. There is no right or wrong place to be in Alaska.

Patience on-shore is certainly necessary -- restaurants on land, along with breweries, pubs, and shops of all kinds -- can be quickly overwhelmed by tourists disembarking cruise ships. Consider trying to stagger your approach to going ashore. Have lunch early instead of at peak times, or patronize establishments that are a little off the beaten path: the overworked staff will thank you -- as will your stress levels.

Also consider not rushing ashore at seven in the morning - unless you are on a tour or plan to grab breakfast ashore. These are real, working towns and very little will be open when your ship first docks. Instead, stay onboard until the rush of shore excursion departures has lifted.

Finally, talk to the locals. Consider where you shop, and what you do while you are in Alaska. Everyone wants to land on a helicopter on a glacier for $600 per person, but we'd wager a $10 bowl of local seafood chowder and a $6 pint of locally-brewed beer will be just as rewarding -- particularly if you get roped into some local conversation.

The people, and the wildlife and natural surroundings, are what make Alaska special. Those things have all remained wonderfully constant.