You may also like
Dismiss
7 Places to Cruise Without a Passport
Faster to the Fun on Carnival Cruises
Carnival Cruise Line History
Carnival Cruise FAQ
Why There's Still Nothing Like a Day on the Water
Alaska Towns, Cruise Lines Prepare for Launch of 2021 Summer Season
Can You Work From A Cruise Ship? Our Tips for Working Remotely at Sea
What Kind of All-Inclusive Cruises Can You Find In Alaska -- and Which One Is Right For You?
2022 Alaska Cruises Are Going Strong, But Supply Chain, Employment Issues Remain
5 Cruises That Are Cheaper Than a Weekend in New York City 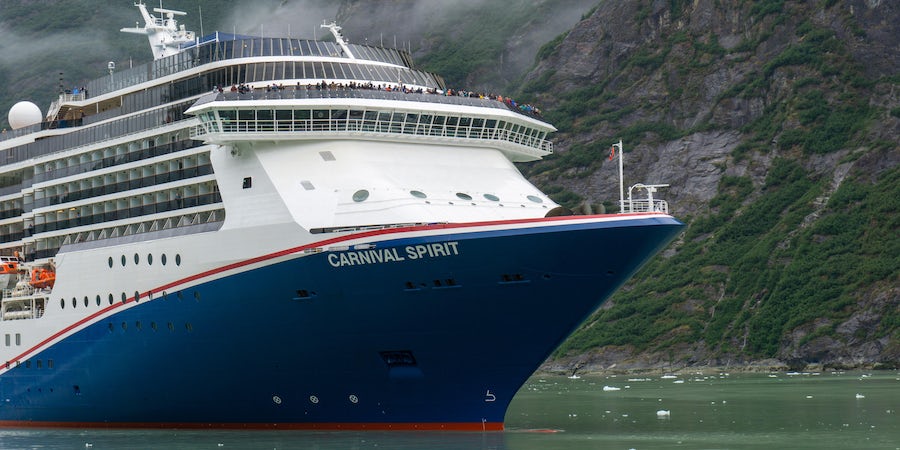 Is Carnival The Best Cheap Cruise to Alaska?

Carnival Cruise Line has long been the value leader in cruising -- industry speak for "cheap", or "affordable". But rather than being cheap in the negative sense, a Carnival cruise is merely economical, a value-priced cruise that offers a lot of bang for your vacation buck.

Carnival dominates the Caribbean, and rightly so: the line has called that region home since its inception 50 years ago. It is its primary stomping ground, served out of a variety of homeports located along the southern and eastern U.S. seaboards.

Alaska, however, has been dominated for decades by Holland America Line and Princess Cruises, the de-facto gold standard in the region for those looking for a big-ship cruise that doesn't skimp on local immersion.

But during Cruise Critic's recent sailing to Alaska aboard the 2,124-passenger Carnival Spirit, we discovered Carnival has a lot to offer those looking to cruise Alaska. In fact, a Carnival cruise might just be the best cheap cruise to Alaska that money can buy.

Here's what we found sets the line apart:

It's tough to beat the inherent value of a Carnival cruise. Pricing for entry-level inside staterooms is below that of the big competitors on many dates and itineraries, and Carnival's ships offer a full complement of inside, oceanview, balcony staterooms and suites to suit every taste and budget.

Carnival has long been known to offer staterooms that are larger than industry-standard, and that holds true on the line's vessels deployed in Alaska. Our oceanview stateroom on Carnival Spirit, for example, was large enough to have a desk, full-sized couch, table, small chair, three closets, and one bed that can be split apart into two twins.

Some lines sailing to Alaska omit this category from their newer ships, leaving passengers to choose from either inexpensive inside staterooms or pricy balcony staterooms if they want a view. Not so with Carnival. In fact, we noticed many multi-generational families travelling together had different stateroom categories: some were in balconies, while others were across the hall in inside cabins.

And with a price point that is among the most affordable in the region, getting onboard a Carnival ship is less of a hit to your wallet, right out of the gate.

Onboard Amenities Are Reasonably Priced

Getting onboard ship is only half the battle. Naturally, you'll want to drink, eat, and do all the things that are on offer -- and doing so on a Carnival cruise to Alaska isn't as expensive as some other mainstream lines.

If you prefer to go without the package, individual drinks are reasonably priced, too. A beer runs about $8, and a custom-crafted martini at the line's trendy Alchemy Bar (which arguably makes the best cocktails onboard) will run you about $14.

Brunch at the ship's steakhouse will cost $25 per person (and we highly recommend it, as the line typically offers this only when the ship is scenic cruising the magnificent Tracy Arm Fjord), while dinner at this luxe venue will run $42 per person. That's slightly more than Princess charges for its steakhouse ($29 per person), but less than what Royal Caribbean charges ($59 per person).

But Carnival ships offer plenty of inclusions, like meals in the formal dining room or the more causal lido buffet eatery, along with burgers at Guy's Burger Joint (which, in all honesty, we still can't believe don't come with some sort of surcharge), and the delicious, hand-made burritos and tacos at the BlueIguana Cantina. Bonus: the latter is typically open for breakfast, too.

Other venues, like Bonsai Sushi, are reasonably priced: lunch here will run you less than $15 for a delicious bento box with miso soup, salad, and sushi and sashimi.

This might just be Carnival's best-kept secret. Where other lines take a ship and put it on a seven-day run that never varies, Carnival offers several departure ports and itinerary lengths that vary depending on vessel and departure date.

In 2022, three Carnival ships are bound for Alaska -- the largest deployment in the line's history.

Carnival Spirit sails from Seattle, offering six, seven and eight-day Alaska cruise itineraries between now and the end of the season in September. A six-day sailing starts at a little over $400 per person as of this writing, in an inside cabin.

Fortunately, Carnival's new triple-threat Alaskan cruise season isn't just a one-off. Next year, the line will continue to send three of its cruise ships to the Last Frontier.

The newly-acquired Carnival Luminosa (ex. Costa Luminosa) will also sail to Alaska in 2023, though exact itineraries have yet to be announced, though it is likely Carnival Luminosa will take up Carnival Splendor's current weeklong sailings roundtrip from Seattle.

Carnival has a reputation for being all about wacky, poolside fun rather than quiet, cerebral introspection. And it's true: a Carnival cruise to Alaska is still bold, loud and plenty wacky -- but with an edutainment twist that's still designed to impart some knowledge of the destination on its passengers, albeit in a fun and zany way.

There are game-show style events held in the ship's main theatre and atrium that focus on Alaskan topics, like a fish toss game that first asks trivia questions about Alaska's fishing industry before teams are invited to try to successfully toss -- and catch -- rubber salmon for points. Other events like Alaskan Trivia and even a Northern Lights Deck Party take advantage of the unique history -- and location -- of Alaska. So expect some fun diversions like axe throwing (not real axes, of course!) and even warming boozy cocktails in the ship's coffee bar for those chilly Alaskan days.

But where Carnival really excels, and sets itself apart from every other mainstream line, is having its own onboard naturalist aboard each ship. Our naturalist, Chris, not only made announcements over the public address system at relevant points during our voyage, but also held informative (and yes, still very fun) lectures over the course of the voyage on subjects like Alaska's history, Tlingit peoples, wildlife, and even our ports of call.

We've only seen onboard lecturers aboard smaller, expedition-style vessels or luxury vessels. Aside from the park rangers that come aboard ships in Glacier Bay National Park, onboard naturalists on big ships are a rare breed, in danger of dying out with long-gone events like trap shooting with a bridge officer and the midnight "Chocoholic" buffet.

Kudos to Carnival for keeping the tradition alive.

What you won't see on Carnival that other lines offer: local Alaskan beers and fresh-caught seafood. You'll have to sail with Princess or Holland America Line to get some of those. But, with so much of that available in port (if you're not eating and drinking your way through each port of call, you're missing out on the real Alaskan experience), having local options onboard ship becomes less of a critical issue.

It perhaps goes without saying, but we'll say it anyway: Carnival offers fun and entertainment for the whole family. Thanks to its diverse kids' clubs and family-friendly programming, it is a choice for families with young children, who may find the more adult pace of Princess or Holland America Line a bit too staid. No one will look twice at kids being a bit boisterous in the dining room or running along the corridor on a Carnival ship (parents: please don't let your kids run in the corridor!)

But Carnival is still good for couples, adults and solo travelers looking for a more subdued experience. Carnival's onboard Alchemy Bar mixes up some of the best custom-cocktails at sea, while food served in the dining room is a notch or two above what you might expect and compares well to the cuisine served on Holland America and Princess.

There are also quiet spaces aboard each Carnival ship that the more bookish adults among us can retreat to in order to escape te din of the broader ship. On Carnival Spirit, that space was the oddly-cozy Jungle Promenade on Deck 3 forward, a sort of elaborately overbuilt space with extruded giraffes and wicker furniture that looks bizarre in Alaska, but serves a quiet enclave of peace with some pretty spectacular views.

Carnival also offers some of the best comedy programs at sea. Its Punchliner Comedy Club offers four comedians per sailing, on average, each of which does a family-friendly show early in the evenings and a more explicit, very R-rated show late at night. Kids and adults will also enjoy Carnival's stage spectaculars held in the ship's Main Theatre. On our sailing, 88 Keys -- not a new show by any stretch, but a well-loved one -- received thunderous applause from appreciative passengers.

Best of all, Carnival's crewmembers are kind, friendly, and take great pains to address you by name and remember your favorite drinks, meal preferences, or likes. It isn't formal (you can expect to be called by your first name, and not Mr. or Ms. So-And-So), but it is genuine -- and consistent. Service levels on Carnival are every bit as good as those on lines that cost two and even three times as much.

You might not expect that level of personalization on a ship with 3,000-ish passengers, but Carnival strives to provide it, and it is appreciated by new and past passengers alike.

That, and more, makes a Carnival Cruise to Alaska one of the best value vacations we've seen in the region -- for a price that won't break the bank.