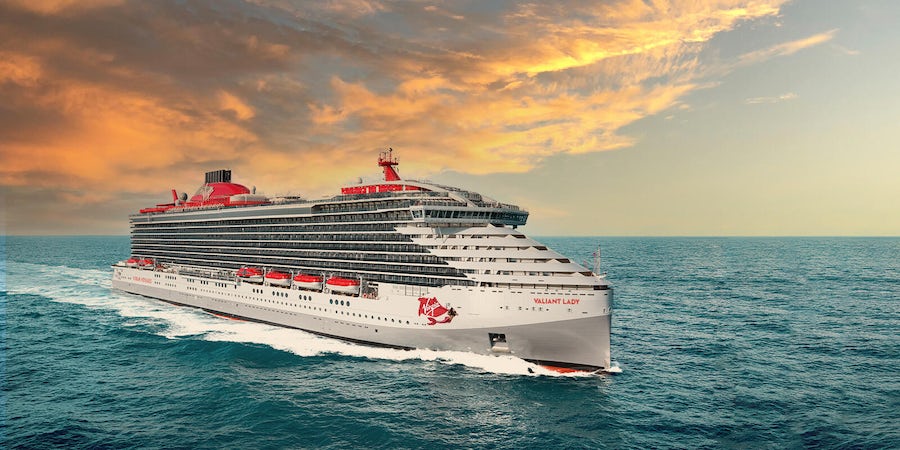 Bachelor Nation, get ready for rose ceremonies set at sea. The 19th season of ABC'S The Bachelorette continues on Monday, August 1, with Rachel, Gabby and their possible love interests gathered onboard Virgin Voyages' Valiant Lady.

It's perhaps fitting that Richard Branson's cruise ship was chosen to play its starring role. The cruise line is adults only, and it's decked out with saucy references throughout; you get cones at a counter called Lick Me Until Ice Cream. The "lady ships" -- Valiant Lady is the second in the fleet, sister to Scarlet Lady -- have a capacity of 2,700 passengers (although you'll see far fewer people than that on the show).

Gabby and Rachel's digs are Valiant Lady's largest RockStar suites -- the Massive Suite -- which are situated at the very front of the ship. These suites are each 2,147 square feet and come with a huge outdoor deck, peek-a-boo showers, vinyl turntables and -- of course -- a hot tub.

No one wants to give the brackets away, but Virgin Voyages is saying that other onboard venues will be prominently featured in upcoming episodes. The glitzy nightclub The Manor is the setting for what is being teased as "one of the season's most competitive dates." The Redemption Spa's thermal suite and mud room has been dubbed "a merman hideaway" and hangout for the guys.

Other onboard areas that make an appearance are the outdoor daybeds at The Dock, the air hockey games in The Social Club and the bar Loose Cannon.

Bachelorette Filming Onboard Not Really A Secret

As one of TV's most watched reality franchises, the Bachelorette/Bachelor shows have their share of avid fans, many of whom sussed out the news that part of this season would be filmed onboard Virgin Voyages months ago.

Reddit subgroups even tracked the progress of the ship as it left Portsmouth, Virgin's port in the UK, in early April, using the online tool CruiseMapper. Valiant Lady went first to Le Havre, the main port for Paris -- and a few days later, official photos surfaced of the two women near the Eiffel Tower.

Reality TV spoiler experts -- yes, that's a job -- have also revealed that the ship stopped in Belgium and Amsterdam in The Netherlands. While those cities are a long way from the Med, the cruise line has teased that some of the dates will take place in romantic seaside locales.

As per Bachelor/Bachelorette canon, the show will stop its globetrotter toward the end for the Hometown Dates, and with two main stars, this part of the process might take longer than usual.

Still, Virgin Voyages is hoping for the "Bachelor Bump," an increase in interest from fans that almost always happens to a resort or location when the reality show is filmed there.

"Rachel and Gabby couldn’t have a better wingwoman than Valiant Lady, and we're thrilled to play a role in their journey to find the one," Virgin Voyages' President Nirmal Saverimuttu said in a release.

"I think fans will be intrigued and realize that the incredible experience we offer on-board extends beyond the show. They too can embark on a luxurious and relaxing couple’s getaway or guys/girls trip and have an amazing time setting sail the Virgin way."