You may also like
Dismiss
7 Places to Cruise Without a Passport
Best Cruise Ports for Fishing
8 Exhilarating Shore Excursions
Most Amazing Cruise Sunset Photos
Why There's Still Nothing Like a Day on the Water
Alaska Towns, Cruise Lines Prepare for Launch of 2021 Summer Season
6 Tips For Cruising to Alaska on a Budget
Will the Alaska Labor Shortage Affect Your 2022 Cruise? Probably. Here's How to Cope
2022 Alaska Cruises Are Going Strong, But Supply Chain, Employment Issues Remain 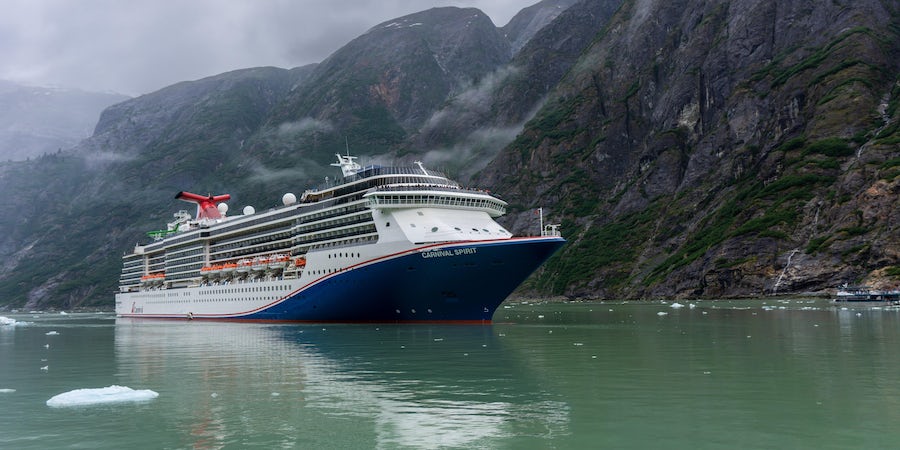 What It’s Like Sailing on Carnival Cruise Line in Alaska? Live from Carnival Spirit

When most of us think of Carnival Cruise Line, we picture the Caribbean. After all, the line has, for decades, been a fixture of warm-weather cruise itineraries leaving from close-to-home ports. But the fact remains that Carnival has long offered a small assortment of Alaskan cruises.

Cruise Critic hopped aboard the 2,124-passenger Carnival Spirit in Seattle for eight days of Carnival Alaska cruise adventure to see what the line is doing in The Last Frontier -- and it turned out to be a perfect time to do so.

It's the largest Alaskan cruise deployment in the history of Carnival Cruise Line, which has historically only deployed one or two ships to the region, and it comes on the heels of last year's shortened cruise season in Alaska, a result of the global health pandemic.

There's another reason we're excited to be sailing aboard Carnival Spirit: this ship, the first of the hugely successful Spirit-class that debuted in 2001, has been permanently based in Australia since the fall of 2012. Until this year, North American audiences just haven't been able to book a cruise onboard Carnival Spirit.

Here are our first impressions of our Fun Ship Fun in the Last Frontier:

Given its value-driven price point, we wouldn't have expected Carnival to offer much in the way of destination immersion aboard Carnival Spirit. As it turns out, we were wrong. While its offerings aren't as elaborate as more upscale sister brand Holland America Line, we were pleasantly thrilled to see Carnival employ an onboard naturalist named Chris on our sailing.

Chris the Naturalist comes over the public address system periodically to advise of wildlife sightings and give other relevant geographical information. He has also hosted two informative lectures so far: an overview of Alaska, and one on the Glaciers, Wildlife and Volcanoes of Alaska.

While many passengers probably aren't swayed one way or another by having a naturalist onboard, we are -- and we've heard similar comments from other passengers.  It's a huge win for Carnival, and a great unexpected surprise on this voyage.

While passengers won't find Alaskan beers onboard -- or even Alaskan seafood, for that matter, Carnival has managed to tweak some of its entertainment programming to offer a more Alaskan bent.

To that end, passengers were invited to participate in a Lumberjack Show on the Pool Deck on our sea day up from Seattle, along with The Great Alaskan Race: an absurdly-fun gameshow where people place bets on crewmembers dressed up as Alaskan animals who then "race" across the stage in the main show lounge.

There was also an Ice Fishing Challenge held in the ship's soaring atrium that was composed of two parts: a trivia session that pitted teams together to outwit the competition on their knowledge of Alaska's fishing industry, coupled with a fun group effort to toss rubber fish into a bucket -- and catch them -- without dropping any.

In Skagway, veteran local entertainer and businessowner Steve Hites came onboard to perform his "Skagway in Story and Song" show before our ship left port. Hites regularly offers this performance on other lines, including Princess and Holland America, and it's nice to see him here onboard Carnival Spirit as well.

Think of this all as edutainment: it's more lighthearted and carefree than the activities on a luxury cruise or expedition vessel sailing in Alaska but make no mistake: the history and heritage of Alaska is being presented to passengers aboard Carnival Spirit. In fact, Carnival's Alaska program exceeds some of its other mainstream competitors, most of which don't customize anything onboard to reflect the destination.

Now if only they'd get some local brews onboard…

We have also been impressed with Carnival's shore excursion program in Alaska, which is diverse enough to include inexpensive tours that nonetheless offer a good time and showcase the ports of call, alongside bucket-list experiences costing hundreds of dollars per person.

Pre-booking excursions is essential; many were already sold out by the time we had stepped aboard Carnival Spirit. And despite the high cost, bucket-list items like flightseeing tours were some of the first to go.

A total of 123 individual shore excursions are offered on our sailing, and choosing really is the hardest part. We ended up doing the Bordello Breakfast and Historical Tour in Skagway, a reasonably-priced morning excursion that includes breakfast at the famous Red Onion Saloon along with a tour of the former Gold Rush-era brothel. The bawdy jokes may have been painfully obvious, but the Red Onion is filled with history and should be toured if only to see the original surviving silk wallpaper that graced the brothel's rooms and artifacts that were found stashed underneath the floorboards 80 years earlier when the building underwent renovations in the 1970's.

Kudos to Carnival, too, for offering passengers a chance to hop off their ship during scenic cruising in Tracy Arm for a chance to get up close and personal with the North and South Sawyer Glaciers via one of the Allen Marine dayboats that are synonymous with Alaska. Not every cruise line offers this tour, and the fact that Carnival Spirit spends enough time in Tracy Arm to allow for not one, but two, departures of this sightseeing tour is a pretty big win for passengers, despite the $200/person cost and the ghastly meeting time of 6:30 a.m.

Moreover, both tours were completely sold out, with two boats chartered for each departure. Seeing the Sawyer glaciers up close and personal is a moving experience and was worth it despite the cold and the rain. Thanks to the relatively ice-free conditions, Carnival Spirit was even able to make it all the way to the South Sawyer Glacier for the tour boats to rejoin the ship.

Carnival is, like every other cruise line, having some issues in Alaska with shore excursions needing to be modified or changed or, in some cases, canceled entirely due to tour operator staffing availability.

Shore excursion operators in Alaska are currently stretched to the max; all it takes is one motorcoach driver calling in sick to throw the entire day's program off track. Operators and cruise lines are doing their best to keep things running smoothly, but as with anything these days, staffing in Alaska does remain a problem that cruisers should be aware of.

Of the three excursions we've booked so far, only one, in Juneau, was changed. We received a letter the evening before our arrival that our Juneau Gold Panning Adventure had been changed from a 7:30 a.m. departure to a 1:30 p.m. departure due to low enrollment numbers on the morning tour. Passengers were invited to visit Guest Services if that didn't work to come up with alternatives.

You don't need an excursion to enjoy Alaska; we spent an enjoyable day roaming around Icy Strait Point, sampling the local seafood and admiring views of the ocean, the whales, and Carnival Spirit and Splendor docked nearby. But it's nice to have options.

After four days onboard, it's clear to see how well Carnival Spirit is suited to Alaska. This entire class of ship -- which encompasses Carnival Spirit, Pride, Miracle and Legend -- is already loved by cruisers for its relative spaciousness compared to other Carnival Cruise Line ships.

In Alaska, Carnival Spirit really excels. The ship has great outdoor deck spaces that are easily accessible to passengers, including a tucked-away viewing deck situated high atop the navigation bridge that provides for some excellent vistas. Additional open decks run from the pool deck upwards, and even encircle Carnival's iconic "Whale Tail" funnel -- the base of which, aboard Carnival Spirit, actually acts as a skylight for the atrium and Nouveau Steakhouse, below.

Even when the weather is inclement -- as it has been for most of our sailing, which has featured high winds, heavy seas and cooler-than-average temperatures -- Carnival Spirit is still spacious and cozy enough inside to keep passengers connected with Alaska and with the sea, while still keeping everyone warm and toasty.

Public rooms, for the most part, work great here in Alaska. The Fountain Coffee Bar on Deck 2 is lined with 100 feet of oversized oceanview windows and offers great views, as is the Alchemy Bar at the stern of Deck 3, which tends to be popular with the book crowd during the Bar's non-operating hours.

Even The Jungle Interior Promenade that encircles the forward end of Deck 3 -- an overbuilt space that offers a safari motif and eye-popping colors -- is a surprisingly lovely place to read during the day and escape the din of the rest of the ship. That, too, helps Carnival Spirit: as busy and brash as the public rooms can be at various times throughout the day, the ship always seems to have some quiet, tucked-away nook waiting just for you.

Sure, there are some areas aboard Carnival Spirit that seem oddly out of place in Alaska: the tropical-themed Red Frog Pub, a favorite of mine on Carnival sailings in the Caribbean, seems weird in here in Alaska's cooler climate. Ditto for the reggae music that blares out on the bridge cam channel on the in-room television sets; there's nothing less Alaskan than hearing "Cheeseburger in Paradise" belted out while you sail up misty Lynn Canal towards Skagway.

But Carnival's greatest asset is the hardworking, friendly crew aboard Carnival Spirit. The ship feels nearly full, yet not understaffed (at least compared to 2019). Onboard food, from the casual La Playa Grill Lido Café to the main dining room and extra-charge restaurants like the Nouveau Steakhouse, has been universally great -- the latter in particular, where we dined during our dramatic departure from Skagway on a meal of flank steak and red wine while the wind howled and shrieked outside. And I'd forgotten how soft and welcoming the beds in Carnival's staterooms are, across all cabin categories.

There are a few random changes we noticed this year compared with our pre-pandemic Carnival cruises: stateroom stewards now only do one turndown service per day, in the morning.  Butter knives have disappeared from the dining room tables (though are still present in the steakhouse), and printed daily programs -- while still offered -- come on plain white paper and don't display all the activities shown on the Carnival FunHUB App.

The app, though, is remarkably convenient: you can view your current account balance, make dining reservations, and (unfortunately for your wallet), reserve shore excursions at the push of a button. And, unlike many cruise line apps, it actually works.

While I've met many repeat Carnival passengers here onboard Carnival Spirit, I've also met many first timers to Alaska and indeed, many first-time cruisers, period. That, to me, is Carnival's greatest strength: it offers a superb cruise at a very reasonable price. Whether you're in an inside cabin or a suite, you, too, can visit Alaska in comfort.

Carnival Spirit has been away from North America for a decade, but next year, it returns to Alaska once again, joined by the newly-acquired Carnival Luminosa.

For a line that's always had a tepid presence in Alaska, this year -- and next -- are different, as Carnival makes Alaska its newest destination of choice; one it is already proving to have the chops to carry out as every bit well as its more expensive sister-lines.