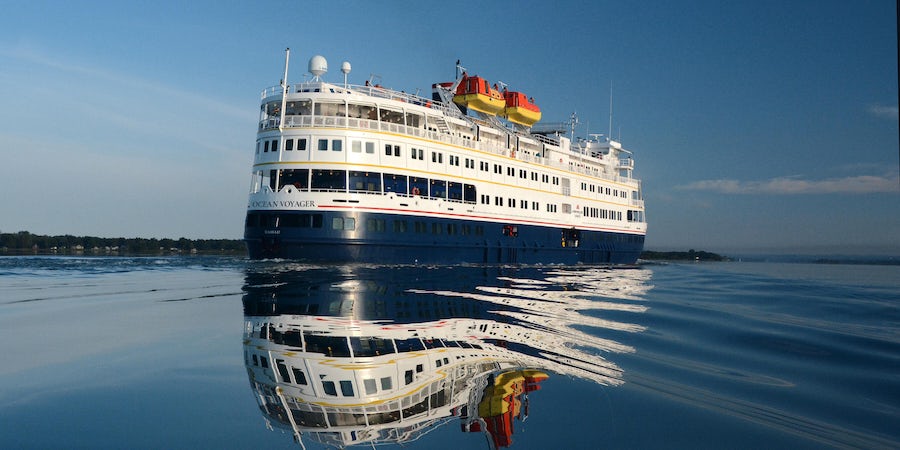 Just Back From Ocean Voyager: What It's Like To Sail on the Great Lakes With American Queen Voyages

With the ongoing complexities of international post-pandemic travel, many North Americans are looking to cruise closer to home and discover places they might never have been. Which is why Great Lakes cruising has become a bright spot in summer 2022, particularly for those who can drive to Midwest and Canadian ports.

Cruise Critic is just back from sailing on American Queen Voyages' 10-night Splendor of the Great Lakes itinerary which runs from Toronto to Chicago or in reverse. The sailing took place on the 286-foot-long Ocean Voyager, which carries 202 passengers and 84 crew members.

Previously called Victory 1, the ship first launched in 2001 and was fully refurbished in 2019. It was renamed following the 2021 merger between the American Queen Steamboat Company (AQSC) and Victory Cruise Lines to become American Queen Voyages. The company has made a point of concentrating resources on the Great Lakes; sister ship Ocean Navigator also sails Great Lake itineraries from May through October.

Here are a few of our first impressions of the ship, as well as some of the excursions and nine ports visited during the cruise.

Everything Bar Optional Extras is Taken Care Of

This is a cruise where you don't need to fret about having a final nightcap and ending up with a huge bill at the end. We were impressed with the all-inclusive nature of the sailing, which makes it good value for money.

Every port of call features an included excursion; several with entry to museums and attractions that you would normally have to pay for. Simply show your Ocean Voyager key card and in you go. We particularly enjoyed Valley Camp, one of the 'lakers' that once carried cargo around the Great Lakes and is now an atmospheric museum ship and within walking distance of the docking spot in Sault Ste. Marie.

Back onboard, all meals, snacks and drinks -- including an unlimited open bar and freshly prepared lobster and USDA Prime beef on the always available menu every night -- are included. Also in the fare is a one-night pre-cruise hotel stay, ground transfers from the hotel to the ship, Wi-Fi and one complimentary bag of laundry per cabin.

The only extras are optional premium excursions, such as a The Henry Ford Museum of innovation in Detroit and lunch at the Grand Hotel -- said to have the world's largest porch -- on Mackinac. Also extra are wines from the special selection list, spa treatments and gratuities. On sailings for U.K. passengers, flights and tips are included.

The single stand-out feature onboard the ship is the crew and it was really noteworthy how well they worked together as a team. Many of them, including officers, the hotel director, maitre d' and waitstaff, have worked on large cruise ships and openly say they prefer being on a small vessel where they feel part of a floating family and have time to chat to passengers and get to know them. As well as creating a really friendly onboard vibe, this also makes for a very personal service where you are made to feel extra special.

Within a couple of days we were being addressed by name and waitstaff and bartenders made food recommendations based on personal preferences, showed us to preferred places in the dining room and remembered our favorite cocktails.

Staff members are also very intuitive and go out of their way to help, from assisting the less mobile with their walking frames and opening doors to offering to fetch and carry foods from the self-serve buffet and bringing plated dishes featured on the main dining room menu up to the informal Grill. Even if what they are asked isn't technically their job, they will go out of their way to help, or find someone else who can.

You Get to See Headline Sights…

The Splendor of the Great Lakes itinerary criss-crosses between the U.S. and Canada to cover all five lakes.

From Port Colborne, on Lake Erie, there is an excursion to experience the close-up spectacle of the mighty Niagara Falls. If you want to really feel the spray on your face then head to the upper deck, or stay dry on the lower level behind glass.

Embarkation and debarkation days are also special on Ocean Voyager. American Queen Voyages is the only cruise line on the Great Lakes that currently sails from the historic Navy Pier, which is also a vibrant downtown waterfront attraction, in Chicago. Whether you get on in Chicago or Toronto, a pre-cruise overnight stay is included in your fare so you’re not killing time.

In Toronto, there was the option for a city highlights tour, for an additional charge, which ended at the ship in the afternoon. Able to leave our suitcases in the baggage room, we opted to explore independently from the centrally located hotel and then take the included transfer later in the day.

With an early evening flight back from Chicago we chose to sign up for a similar coach tour at the end and it really filled the time. Stops along the way included a walk through Millennium Park and the chance to take photos of the famous skyline and Wrigley Field baseball stadium. The price included a transfer to the airport and it was well worth it to save sitting around for hours.

… And Places You've Probably Never Been To

"How many of you booked this cruise especially to see Cleveland?" joked the shore excursions manager in one of her daily port talks. There might have been a ripple of laughter in the audience but passengers were invariably pleasantly surprised and had any preconceptions upturned when they got back from the city the next day.

Included entry to the six-floor Rock and Roll Hall of Fame, right next to where the ship docked, was a big hit -- in every sense -- and the private guided hop-on hop-off tour for Ocean Voyager passengers (also offered in Sault Ste. Marie alongside a narrated motorcoach tour in Detroit) provided a great overview of this underrated city.

Conversely, the highly anticipated day on Mackinac Island lived up to expectations. This unique destination has no motorized vehicles and the only way to get around is in horse-drawn buggies (the equine residents during the summer season outnumber the island's permanent population), by bicycle or on foot. It was really neat to return to the ship at lunchtime to see a couple of dray horses tucking into buckets of grain after delivering supplies to the vessel.

Ocean Voyager is a homely, friendly ship with a welcoming traditional-style lounge and adjoining bar. Any solo cruisers will quickly make new friends, as will the couples -- many of them repeaters and loyal to the line -- that make up the majority of passengers. There is free-seating at meals although for those who prefer their own company there are some tables for two in the main Coastal Dining Room and The Grill, the smaller informal dining venue. The food is well presented with imaginative lunch and dinner menus featuring different dishes throughout the cruise.

Cabins, all them outside-facing, are on the small side, but with such a destination-rich itinerary, you probably won't spend much time in them. Even on the two so-called 'sea days' out on the lakes there is a busy daily program of enrichment talks, quizzes, games, delicious English and Viennese-themed afternoon teas and the daily post-dinner concerts and dancing with the talented onboard trio.

There is Something for Everyone

Ocean Voyager offers a flexible cruising style and passengers can do as much or as little as they choose. Shore tours are graded, and in the daily port talk the activity level and amount of walking involved is clearly set out; often with options for anyone with mobility issues.

At all-day stops in places such as Port Colborne and Mackinac Island, there is also the opportunity for independent explorers to go out and do their own thing. For example, at Niagara Falls we were particularly keen to see the newly opened Journey Behind the Falls attraction, where visitors to the former power station can walk along a 100-year-old tunnel to a viewing platform and enjoy a different view of the Horseshoe Falls.

The local guide taking Ocean Voyager's included excursion was very happy to provide information on how we could do this and afterwards we took a cab back to the ship. On Mackinac, you can go on the included shore tour and still have plenty of time to hire a bike and ride around the eight-mile road circling the island.

Was There Anything That Didn't Hit the Mark?

Our only grumble, also voiced by other passengers, was the check-in process. We understand Covid measures and the required pre-cruise lateral flow test (offered free if passengers don't have proof of a negative test prior to embarkation) have slowed things up, but some of the paperwork involved at the pre-cruise hotel was overly lengthy.

People had to stand in a long line in the corridor before going through a two-stage check-in where some details, most of which could have been submitted electronically in advance, were written down by hand. The welcome cocktail was certainly very welcome when we finally got to hand in the health questionnaire -- the final piece of paper -- at the dockside.

But our final conclusion: Ocean Voyager provides a very personable and personal small ship experience in these vast waterways with a very high number of inclusions. It's a great way to see the Great Lakes.