You may also like
Dismiss
MSC Cruises History
King Crab Fishing in Norway on a Cruise
MSC Cruises' Seaside-Class Ziplines
7 Reasons to Cruise Celebrity Flora in the Galapagos
All About Adventures by Disney Family River Cruises
The Most Expensive Hotels Near Southampton for a Pre-Cruise Stay
Cruise Vision 2020: The Future of Cruising in Australia and New Zealand
The Choir of Man on NCL
What Is LNG Gas, and What Are LNG-Powered Cruise Ships? 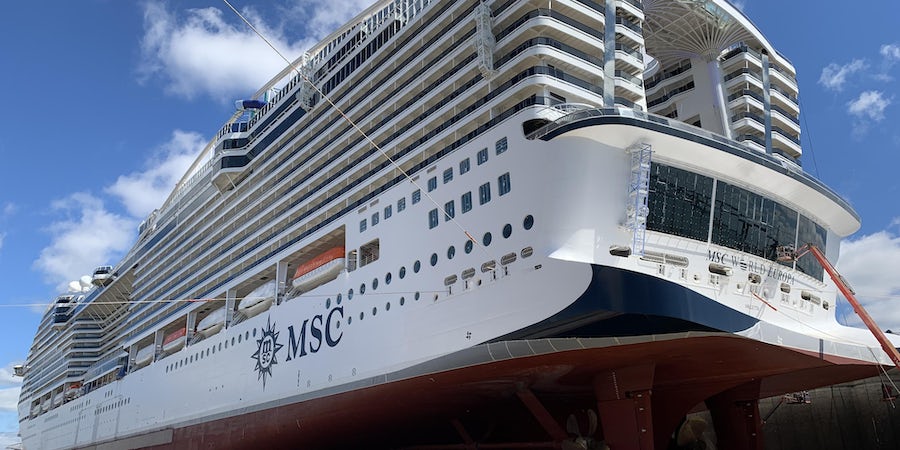 When it debuts, the 6,762-passenger, 205,700-gross-registered-ton ship will become the sixth-biggest ship in the world, after Royal Caribbean's five Oasis-class ships (to which it bears a striking resemblance -- more on that later).

MSC World Europa will also be MSC's first ship powered by Liquefied Natural Gas and -- so the line claims -- will have the lowest carbon footprint per passenger of any ship sailing today.

The ultra-modern design includes an inverse bow that cuts throught the water, enabling fuel efficiencies; and a fuel cell, allowing it to store energy rather than run the engines at all times.

The ship will be christened in Qatar, where it will begin life as a floating hotel for football fans visiting the Gulf city for the World Cup, before going into service in November.

We got onboard MSC World Europa, which is under construction at the French shipyard Chantiers d'Atlantique, to get a sneak peek of what to expect.

Anyone familiar with Royal Caribbean's Oasis-class vessels will feel right at home in this scooped out section at the aft of the ship.

Featuring inside cabins with balconies overlooking the promenade (and straight into your neighbor's room opposite, the Promenade will include a whisky bar, a candy store and an 11-deck dry slide, The Viper @ Spiral (see below), similar to Oasis Class Ultimate Abyss.

The area will be flanked by LED palm trees, some 10 decks high and two indoor/outdoor restaurants atop.

At the back you'll find the aft cabins, all with wraparound balconies and stunning views of the wake (you'll also find some "secret balconies" on the lower decks, not connected to cabins).

Above all this is a glass walkway looking 18 decks down; a kids play area and waterslides including a drop slide.

The similarities with Oasis of the Seas and its sisters (those five ships were also built at this yard) are striking: the only things missing are the Aqua Show and FlowRiders.

There's no doubt this is a striking and terrifying structure, topped with a snake's head and twisting and turning from the 18th to the seventh deck.

However, anyone familiar with 10-deck dry slide The Ultimate Abyss on Oasis vessels will know what to expect.

It was not open when we visited, so we don't know what the experience will be like, but it's definitely not for the fainthearted.

The ship will have a double-height English-style pub, Master of the Seas, complete with a micro-brewery serving three types of beer onboard (more details will be revealed shortly).

The double-height space (it's been single on previous ships) recreates a traditional English pub, complete with wood paneling, red leather chairs -- and a pool table -- and is situated on the main Galleria.

Right next door, and visible from the bar is a small barber shop. We're not quite sure why the designers have placed a barber shop in such a public area, but if you like people watching you have your hair and/or beard trimmed then this is the place for you.

4. MSC World Europa Will Have a Bar Dedicated to Gin

The Gin Project will include more than 70 craft gins, with classic cocktails expertly prepared by gin-tenders along with a vintage Crawley’s shaker, where guests can test their hand at shaking their own botanical cocktails.

A first for the line, Raj Polo is, as the name suggests, a throwback to the days of the Raj, complete with furniture, artwork and sculpture that will make you think you are taking tea in a colonial mansion.

Raj Polo will offer a traditional English Breakfast and a Afternoon Tea, complete with scones, sandwiches and preserves.

There will be a fee, but it will not be London hotel prices, assures Jacques Van Staden, the line's vice president of food and beverage.

6. MSC Has Partnered With a Mixologist in the Elixir Mixology Bar

Another first for the line, the Elixir Mixology Bar will feature a variety of classic and unusual cocktails and is situated on the top deck of the triple-height Galleria (the indoor promenade). The line has partnered with a mixologist to create some of the more unusual drinks.

This space also offers an outdoor terrace to enjoy pre- and post-meal drinks, as well as a dedicated Liquor Corner for tasting your favourite spirits.

7. MSC World Europa Will Grow Its Own Herbs and Vegatables Onboard

The ship debuts the first (for the line) hydroponic garden onboard, known as the Chef's Garden Kitchen.

Here, the ship will grow its own microgreens as well as selected vegetables, which will then be served in the restaurants in what Van Staden is calling a "farm to table" or "farm to ocean to table" concept.

During the day it can host for example kids' entertainment such as drone academy and in the evening it can be turned into a nightclub.

There is an adjacent casual buffet, which includes family games and a fun menu featuring classic American fare from “coney dogs” and salted pretzels to funnel cake.

9. Sportsplex Will Feature Bumper Cars And a Roller Disco

MSC has created an entire area at the top and the aft of the ship dedicated to sports and outdoor entertainment.

On the top of the Sportplex you'll find the kids' waterpark and a number of slides, including a drop slide.

Below you'll find the Sportsplex, a two-story glass enclosed space where you can play basketball and soccer and will also feature bumper cars and a roller disco.