You may also like
Dismiss
Viking River Cruise vs. Viking Ocean Cruise
Strictly Come Dancing Cruises
Life Lessons Learned from 'The Love Boat'
Husband Won't Cruise? His Top 9 Excuses and the Arguments You Can Use to Get Him Onboard
8 Reasons Why You'll Love Princess Cruises' Crown Princess
7 Reasons Families Will Love Caribbean Princess
The Most Exciting Ship Launches in 2020
Pictures From the Turner Classic Movies (TCM) Cruise
6 Best Majestic Princess Cruise Tips
Princess Cruises Enchanted Princess: 9 Reasons to Get Excited About This Royal-Class Ship 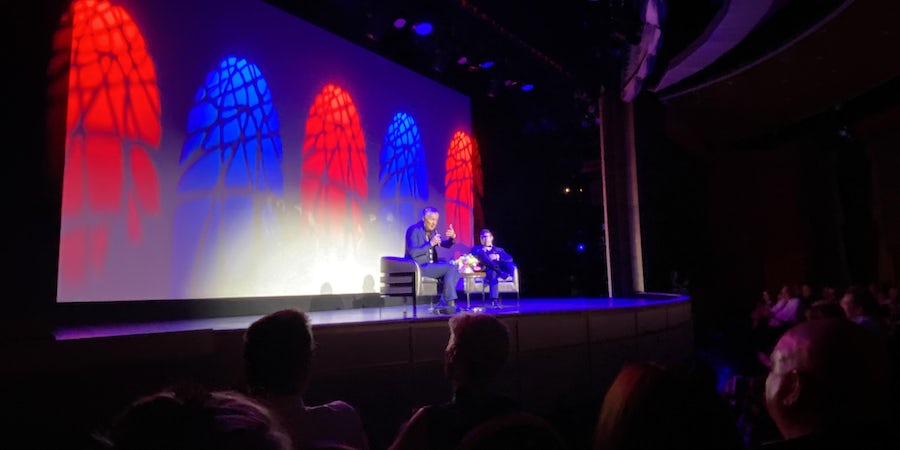 Rory Bremner and the Cruise Director on Enchanted Princess

Enchanted Princess is homeporting in Southampton for summer 2022 and this is one of a number of theme cruises the 3,660-passenger ship is running this season (see below).

Here are some of the highlights of the cruise -- plus a look at Princess' new all-inclusive premium offering, the Princess Plus package.

A full 30 minutes before Rory Bremner takes to the stage on Enchanted Princess there are already dozens of people sitting patiently waiting for the British impersonator to entertain them.

And when cruise director Matt introduces the comedy legend there isn't a free seat available -- and that’s for Bremner's second show of the evening.

A group of Irish fans had booked the cruise especially to see him and when I looked for a seat in the theatre 15 minutes before his first show at 8.15pm I was told "not a chance" by another couple who were resigned to returning to his 10.15pm show.

The fun started on the second night when Lucy Porter, a regular on British comedy shows such as Would I Lie To You and Richard Osman's House of Games.

Later in the week she gamely threw herself into a comedy quiz in the Vista Lounge, where it was standing room only as we tried in vain to win one of the bottles of Princess Cruises Champagne up for grabs.

And we've been brilliantly entertained all week with Cruise Director Matt's dry British humour as he hosts quizzes and comedy shows with his long-suffering American deputy Giani.

Britain's Got Talent semi-finalist Gary Oliver gave ventriloquism a whole new twist (you have to be there) and Marc Paul's Mind Games got the thumbs up from lots of passengers.

But it was Ardal O’Hanlon’s stand-up set -- he's really not as stupid as his Father Dougal character you know (he told us, so it must be true) -- and Rory Bremner’s spot-on impressions -- he has Boris Johnson down to a tee -- and his subsequent Q&A session with Matt that were the big hits of the cruise.

The good news is that Princess Cruises is considering running more comedy cruises and Enchanted Princess already has two more themed itineraries to come this summer.

Its Sports Stars cruise is in August departing from Southampton for Spain and France with an impressive line-up onboard: former rugby player Martin Johnson, who captained England to victory in the 2003 Rugby World Cup in Australia; Phil Tufnell, the former England cricketer who now commentates on TV and radio, and Sir Steve Redgrave -- one of Britain's all-time Olympic greats, who won five Gold medals for rowing in five consecutive Olympic Games.

Gail Emms MBE, who won Silver at the Athens Olympics for badminton, will host the series of Q&A sessions.

The 7-night roundtrip from Southampton goes to Guernsey, La Rochelle in France and both Bilbao and La Coruna in Spain.

Enchanted Princess also has a Culinary Star voyage in August, with celebrity chefs John Torode, Matt Tebbutt and Rachel Allen on board.

Torode is best-known as a host and judge on MasterChef, Tebbutt presents Saturday Kitchen on BBC1, Best Bites on BBC2 and Food Unwrapped on Channel 4, while Allen is a celebrated Irish TV chef whose family owns the world-famous Ballymaloe Cookery School in Ireland.

The Culinary Star cruise is another 7-night Scandinavia voyage with a similar itinerary to this Comedy Stars cruise, stopping at Norway's capital Oslo, the lovely little town of Skagen in Denmark, with an overnight stop in Copenhagen -- Denmark's capital.

Princess Premier Package Offers Even More Than Princess Plus

For £60 per person, per night, Princess Premier gives guests unlimited wifi on up to four devices, 15 complimentary drinks a day that cost up to $18 in the bars or restaurants and 25 per cent off bottles of wine.

Princess Premier also includes meals at two speciality dining venues, such as the New York-style steak house Crown Grill and the lovely Sabatini’s Italian Trattoria. Other speciality restaurants include Bistro Sur La Mer, with a French menu, and the new Salty Dog Gastro Pub, which is good for burgers.

You also get your gratuities paid, free speciality tea or coffee, free digital downloads of all the photographs of you taken by Princess photographers and three 8x10 prints.

Princess Plus costs £40 per person per day and only includes unlimited wifi on one device at a time, 15 drinks a day up to $11 each, gratuities and unlimited speciality tea or coffee.

Your choice will depend on your taste in wine or cocktails and whether you're happy with the complimentary restaurants -- there are three main dining rooms, a buffet restaurant, Gigi’s pizza restaurant on deck 7 and free snacks at the Salty Dog Grill (cheesy chips were popular) or portions of pizza at Slice -- both on the pool deck.

But me? Well I’m just looking forward to tonight's Showtime with the Comedy Store Players from London. And I’m hoping there won't be a queue for seats on this final day of what has been one of the most-fun(ny) cruises I’ve ever experienced.