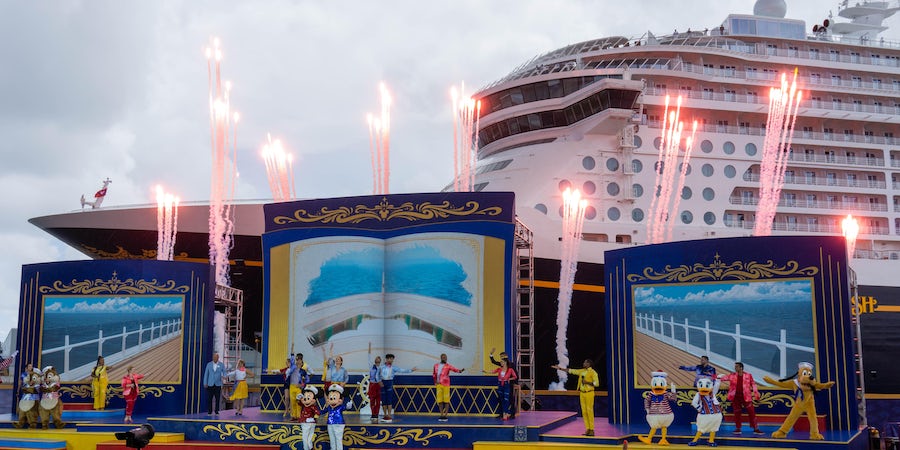 Under a sky that alternated between sunshine and showers, Disney Cruise Line officially welcomed its first new cruise ship in a decade into its fleet on Wednesday, June 29, 2022, in a heartfelt ceremony at Port Canaveral, near Orlando, Florida.

After just 24 hours onboard, there has been no shortage of WOW! moments aboard Disney's new 4,000-passenger, LNG-powered Disney Wish -- a ship so detailed, innovative and different from anything else at sea that just strolling its decks is to embark on a real voyage of discovery.

Disney Wish is the fifth cruise ship in the Disney Cruise Line fleet, following on the heels of Disney Magic, Disney Wonder and newer, larger siblings Disney Dream and Disney Fantasy. So in that vein, we've picked our favorite WOW moments aboard Disney Wish -- and they may not be what you're expecting.

The Concierge Tower Suite, aka the Funnel Suite

Save your pennies: Disney's Concierge Tower Suite is a first for Disney, and the cruise industry: the first suite inset inside a ship's funnel.

To be fair, the funnel -- the forward one -- is a dummy funnel that doesn't carry active exhaust up from the engines. On past ships, the teen's club has been located here. But onboard Disney Wish, it is home to one of the most elaborate and beautiful suites we've ever seen at sea.

Designed by a team led by Disney Imagineer and interior design principal Claire Weiss, it can sleep up to eight in three separate bedrooms, including a specially-designed kid's room that features the coolest bunk beds we've seen at sea, plus marble-clad bathrooms adorned with upscale Bulgari toiletries that you'd find on luxury lines like Silversea.  The master bath alone is nearly as large as our entire balcony stateroom.

There is also a library, a pantry, and an airy, two-level living area filled with great seating options and sweeping views of the forward decks.

The Concierge Tower Suite contains no balcony, but who needs a balcony when a separate door at the base of the funnel takes you out onto the ship's biggest balcony at sea -- the sun deck. Subtly designed around a Moana theme, it is one of the nicest suites afloat, on any line.

In what may be the prettiest space onboard, The Bayou is situated along the main Deck 3 thoroughfare running from the Grand Hall Atrium to the Walt Disney Theatre. Inspired by "The Princess and the Frog", this stunning lounge offers up some cool Southern-inspired cocktails plus Abita beer on-tap.

It's one of those spaces that makes you stop in your tracks, particular with its canopy of magnolia flowers and Spanish moss, accented by twinkling lights and adorned with rich emerald green and burgundy chairs, banquettes and a sweeping bar.

With its live music each evening and informal vibe, the space has become an unexpected favorite -- cool and relaxed by day, clubby and intimate by night. It's also a great place to wait while you try, like the rest of the ship, to get into the Hyperspace Lounge directly across from The Bayou (more on that later).

When we first heard Disney was doing away with its tried-and-true atrium concept, we were worried: Why fix what isn't broken? But the Grand Hall -- created by removing the midship bank of elevators and expanding the traditional atrium space out even further -- is a dreamlike creation that offers so many unique nooks and surprises that it took us aback.

The Grand Hall offers a stage for performances and Disney's trademark Character Meet-N-Greets. But it is also home to an unobtrusive Guest Services area accented by sweeping moulded columns, twinkling lights, two coffee and cocktail bars, and of course a sweeping staircase anchored by a bronze statue of Cinderella, the glass slipper, and Lucifer the cat.

There's more: since Disney's Oceaneer Club is now on Deck 2, kids can walk down their own grand staircase right from the Grand Hall, or opt to take the built-in slide that takes them from the base of the Grand Hall down to Deck 2.  A dedicated check-in area is situated on the Deck 3 level of the Grand Hall -- just for kids. Talk about an entrance!

Bright and airy by day, the Grand Hall is best viewed at night, when it truly embodies the spirit of Disney, when its Cinderella-inspired chandelier can be viewed with all its twinkling lights aglow.

Disney's Oceaneer Club is cleverly divided into six separate sections and, with the exception of the "it's a small world" nursery that is intended for infants six months old up to three years of age, the remainder of the Oceaneer Club is for children aged 3 to 12.

Inside, kids will find interactive spaces designed to entertain, educate and delight. An Imagineer-themed space encourages kids to build and explore, while Micky and Minnie's Captains Deck is a bridge between the infant spaces and big-kid spaces, with interactive activities and even a "real" navigation bridge where kids can practice sailing the ship.

Everything a kid could want is housed in here -- and then some. Away from the buzz of the adult activities, this is an enclave just for kids to be kids.

The spaces are, equally, stunning. Your kids won't want to leave, not when they can indulge in a fairlytale world come to life, join the Marvel Superhero Academy, or spend time in the elaborate Star Wars Cargo Bay.

Of course, all of this is punctuated with Disney's inimitable storytelling abilities. Expect to see superheroes, villains and Disney characters making appearances. But, too, expect the activities to encourage kids to explore and be curious. We got caught up in the nursery, turning knobs and wheels that make the wall displays come to life. So ingeniously designed are all these touches that they surprised even the adults with their mere existence.

Imagine the reaction of a one-year-old toddler when the wall comes to life.

Call us crazy, but we became ridiculously excited to see the massive self-service laundry facility located aft of the forward elevator lobby on Deck 8. With most cruise lines doing away with self-service options of any kind, seeing any laundrette on a ship these days is a rare occurrence.

Enter Disney's Fairytale Fresh Laundry. Rather than some hot, small room crammed into a void near a mechanical space, this attractive space houses 26 washers, 30 dryers, 10 fold-down ironing boards, six keycard-activated soap dispensers, two folding areas and even has a comfortable vestibule waiting room for those who prefer to stay close to their things.

It may not be the sexiest feature Disney has ever designed, but it was already a hit with passengers on our short preview cruise. We imagine that families with toddlers and active kids will be equally excited.

Sure, this is technically a sixth WOW item, but it's for good reason: the Star Wars-themed Hyperspace Lounge on Deck 3 has one of the most unique menu items ever: a mystery cocktail known only as the Kaiburr Cocktail (tagline: the galaxy's rarest and most valuable cocktail).

You can join the Kaiburr Klub too and find out what all the fuss is about -- for a cool $5,000 per cocktail. Does it come in a special glass? Will George Lucas materialize out of a side door and hand it to you personally while humming the Cantina Band song? We don't know. For some reason we can't quite put our finger on, our bosses wouldn't let us expense this one.

Interested in sailing Disney Wish? Disney's newest wonder upon the seas sets out on its first revenue voyage this July.