You may also like
Dismiss
When to Fly In for a Cruise
Flying to Your Cruise: A Guide to Long-Haul Airports, Airlines and Flights
Help! My Luggage Is Lost. What Should I Do?
Cruise and Stay Holiday Tips
How to Navigate the Airport on Cruise Turnaround Day
What To Do If Your U.K. Cruise Travel Agent or Operator Goes Bust?
What to Do if You Miss Your Cruise Due to a Flight Cancellation or Delay
How Much Can Your Cruise Line Help When the Unexpected Happens?
Top 9 Reasons Why You Should Pick a Cruise You Can Drive To Instead of Fly
Why I'll Never Cruise Without Apple AirTags Again 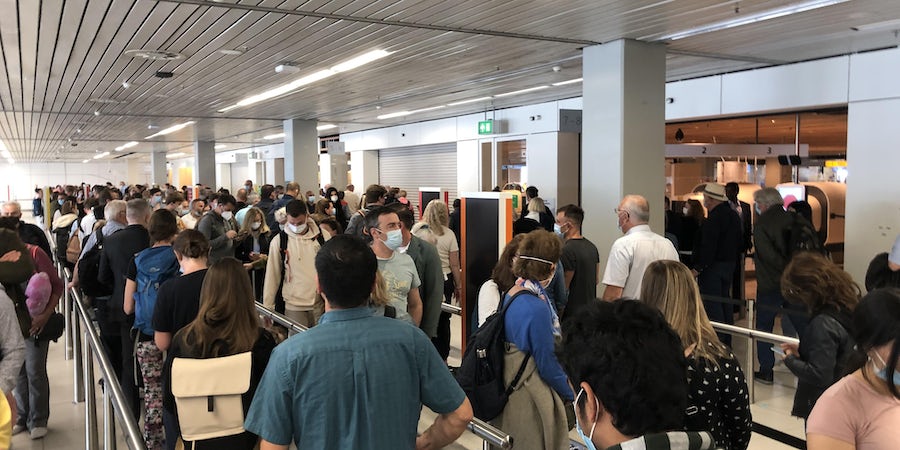 Crowds at Amsterdam Airport Schiphol in May 2022 (Photo: Aaron Saunders)

Flying to Your Cruise: How to Travel This Summer Amid the Chaos

The summer of 2022 is shaping up to be the season of woe for the airline industry: no route, international or domestic, seems to be immune from cancellations and delays due to staff shortages, overscheduling and summer storms.

As a cruiser flying to your ship, the turmoil is nerve-wracking. The Cruise Critic message boards are full of worried passengers wondering if they’re going to make their ship before it sails – and we don’t blame them. The situation in the airports really is as bad as it’s ever been – and given the surge in travel demand, it’s hard to tell when things will get better.

The summer 2022 flight situation has caused our veteran flyers at Cruise Critic to adapt and update our normal advice for flying to your cruise; these are the strategies that we’re personally implementing ourselves so we can make our cruises on time.

Here are the precautions you should take to survive flying to your cruise in Summer 2022 and beyond.

Consider Driving or Taking the Train

This doesn’t work if your cruise is across the country, of course. But if you’re within six to eight hours of your homeport, you’re better off simply driving or taking a train than dealing with flight hassles. We’ve heard of some people packing up the car from the Midwest and making a road trip out of it. This tactic doesn’t necessarily cut costs – we know how expensive gas is these days – but avoiding the airport altogether might be worth it.

Your mindset before you begin is half the battle; if you prepare yourself for the certainty that the airport will be busier and more stressful than usual, you’ll be able to plan better and go in with a better attitude (it’s a bit of a Jedi mind trick). Get to the airport earlier than you usually do – if you normally allow yourself two hours, make it three. We showed up four hours in advance of a recent flight out of Amsterdam’s Schiphol Airport and still nearly missed our transatlantic flight. If you already have a longish layover, buy a lounge pass in advance – sometimes the lounges sell out. If you’re thinking about registering for a service like Clear, now’s the time to do it.

Check out social media for the latest pinch points at your airport of choice – photos of traveler chaos at Toronto Pearson airport and Amsterdam Schiphol are everywhere – , and make sure that you have all the relevant apps and phone numbers with you, in case delays start to pile up. An app like Flightradar24 can be extremely useful; it will show the aircraft assigned to your flight and its flight history. If your incoming flight is very delayed, chances are your flight will be, too.

Arrive in Your Departure Port Two Days Before Your Cruise

At Cruise Critic, we always insist on coming in the day before your cruise; the cost of a night at a hotel is well worth your peace of mind. This summer, we’re saying that arriving at your homeport two nights ahead of time is even better. If your cruise is coming up soon, it might not be possible to make this change, but if you can, do it.

Try to Book on an Airline Where You Have Status

Again, this might be too late if your cruise is coming up in the next week. But having elite status definitely helps when things go wrong and you’re trying to get somewhere as quickly as possible. During one recent summer storm, being able to hop on an earlier flight on standby meant we were able to get home; if we would have waited, we’d have been stuck in Miami. And we’ve used United’s Premier Access help line more times this year than in pre-pandemic years combined.

And if You Don’t Have Status…

It is possible to find out those numbers that get you through to Premier Access, or other elite status lines, online. If you are extremely polite, you can gently explain the predicament you are in and maybe just maybe the person on the other end of the line will take pity on you. A Business Class or full-fare economy class ticket can often get you some elite perks, like priority check-in, expedited security or lounge access. And some lounges – like Plaza Premium – will let you in for a walk-up fee, should you find yourself critically delayed.

There is nothing the airlines like less than being called out on social media. We are not suggesting hurling abuse or ranting on whatever platform you choose to vent your frustration (Twitter is the usual one of choice). But by stating your case publicly we have found that the airline will often DM (direct message) you (this has happened to us with British Airways and American Airlines) and try to solve your case away from the public arena. We haven’t found this 100% successful – nine times out of 10 you are connected to a bot – but it does help alleviate some of that anger after you have been waiting for someone to pick up the phone for an hour. Important followup: if the airline ends up solving your problem, it’s common courtesy to go back on social and thank them.

Be Persistent, Yet Calm in Requests

Be polite – not only will you get much further with your request if you keep a calm demeanor, it’s also about acknowledging the fact that this is not the person on the other end of the line’s fault, it’s the airline’s. Having said that, be persistent – don’t be fobbed off with excuses – ask for times and dates and for a number or an email and a guarantee on when you will be contacted. If that deadline is missed, call back – or take to social media, as noted earlier. It’s also helpful to get the name of the person that you’re talking to, as well as any direct phone numbers – not the blanket toll-free numbers – that you might need to get back in touch.

Don’t fly enough to gain status? Hop to the head of the line with a credit card that offers travel concierge service as one of its perks. In addition to helping you rebook or change flights, these premium credit cards typically also offer a bevy of insurance options like trip interruption and cancellation that can help put money back in your wallet should the unforeseen happen.

Take the First Flight of the Day

As you’re booking flights, look for the earliest flight of the day, particularly if you’re flying domestically in the U.S. Flight issues tend to start as the day goes on, and once delays begin, they cascade throughout the country. Summer storms too, tend to build in the early afternoon and hit in the late afternoon. If your flight can land before then, you just might miss the worst of it.

This makes sense, no matter what time of the year you’re flying. Sometimes connections are unavoidable but the higher prices of direct flight might make you shy away from shelling out for a shorter route. Don’t. You want to get to your cruise port as quickly and as efficiently as you can right now. Buy the direct flight – always. And realize that even though large airports are a nightmare right now, a major hub will have more options for rebooking if your flight is canceled. .

If You Must Connect…

If connections are unavoidable, give yourself at least two full hours between flights. Minimum. (Three might be even better). We’re not kidding, particularly if you are in-transit to another country where you may have to re-clear security or customs before proceeding to your next flight. Pre-pandemic, two hours would have been excessive. Now, it’s a safe bet thanks to staffing shortages, rolling delays, and weather constraints.

Travel With Just a Carry On, If Possible

This advice cuts us to our fashionista core; we like having options for what to wear while we’re onboard. But we’d rather have some clothes than none at all, which is what would happen if your bag doesn’t make it to the cruise port as airlines around the globe struggle to handle lost luggage. We’re slimming down our suitcase for our next trip and taking just a carry on. If we can do it, you can (and here’s some Cruise Critic advice on packing it all in a limited space).

We can’t emphasize the importance of taking out travel insurance when you cruise. Check that the insurance covers cruise travel (cruise, like skiing and scuba diving is often an add on) and of course getting to your cruise. Scour that small print and make sure that if your flight is canceled you are covered for hotel stays, rebooking costs (assuming the airline does not cover that) and in the worst case scenario getting to the next port of call (see below), should you miss the departure port. It’s worth paying a premium for peace of mind, we would argue.

Joining the Ship In the Next Port

If you miss your ship, you might be able to get on in the next port. How easy this is depends on where you’re going. The best place to try this is in the Med in Europe, particularly when all the ports lie within the European Union. In those cases, you should be able to fly or take a train to the next port and board. You’ll need to liaise with your cruise line to do this, so make sure that you and your travel agent have the necessary phone numbers and information to make things happen. Also ensure you have the right documentation to do this: if you miss your cruise out of Miami and want to join in Nassau, you’re going to need a passport. A driver's license and birth certificate, while good enough to get U.S. citizens on a cruise, will not work for an international flight.

Watch Out for the Passenger Vesse Services Act in the U.S.

Getting on the next port is tricky in North America due to regulations that prohibit passengers from joining a ship departing from a U.S. port at the next port of call if it is still within the United States. Doing so is a violation of the PVSA and can result in a hefty fine (we’re talking hundreds of dollars, per person), and many cruise lines simply won’t entertain the idea. So, if you miss your cruise ship in Seattle and elect to fly to Juneau to join – you’re either out of luck or about to part with a lot of money. But, if you miss your roundtrip cruise leaving from Vancouver, Canada – chances are good you can join the ship in Juneau.