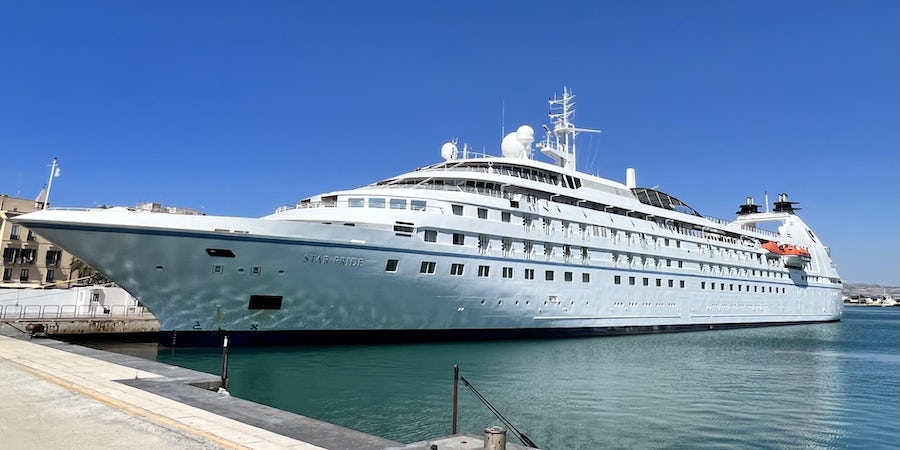 Windstar's Star Pride Cruise Ship Is Now Refurbished and Sailing: Just Back from the Mediterranean

The stretching is now complete: Star Pride has become the third and final Windstar yacht to emerge from its major dry dock refurbishment with an increased capacity of 312 -- up from 212 in its previous form.

The line now has all its ships in service and has successfully completed its $250-million Star Plus Initiative, which involved reimagining and stretching (from 437.7 feet to 521.7 feet) all of its three Star Class motor yachts -- Star Breeze and Star Legend have already been sailing.

Why Did Windstar Stretch These Ships?

All that added technology, plus re-wiring and re-routing of mechanical features, provided an opportunity to expand guest capacity and amenities while still achieving higher efficiency. According to Windstar's President Chris Prelog, the ships are actually using less fuel now, even with the added tonnage (9,975 GT to about 12,969 GT).

If you have sailed on any Windstar ship—either on the Star Class (now called Star Plus Class) motor yachts or onboard the Wind Class sailing yachts, you’ll feel the familiarity of the line’s navy and tan color scheme. The décor is light and airy throughout, with aged teakwood decking and blonde wood accents and furnishings in the cabins. You’ll have to look hard to find signs of the major surgery the ship underwent.

The first noticeable changes to the public spaces are on Deck 7, where the old pool and hot tub have been replaced by a glass-fronted, tiered infinity pool, with the hot tub perched above. Step indoors from the pool deck headed toward the bow, and you’ll find an entirely new spa, salon, and workout area— all evocative of a larger ship.

The other big-ship type improvement is an increase in food choices. New to Star Pride is the Spanish cuisine restaurant, Cuadro 44 by Anthony Sasso, on Deck 6. The restaurant seats only 36 in a cozy communal style dining space.

Prelog joined us for dinner one night, pointing out that we were sitting in what was previously part of the ship’s retail boutique, while the barely larger than a food truck kitchen now fits nicely into the space where the previous pool had been. The new pool is raised above deck, but the old one was sunken into Deck 7. Its removal leaving behind a nearly fire-code ready space, according to Prelog.

The menu includes tapas small plates and sides designed to be shared around the table and “Platos Grandes” of entrées. The lists include seafood, meat, and vegetarian choices. The must-try dish for our group was the Potato Tortilla.

Also new is the outdoor (but covered) Star Grill by television chef and author of 31 books, including The Barbecue Bible, Steven Raichlen, on Deck 8. It’s Windstar’s approach to a global-themed barbecue buffet, situated across from the Star Bar. The menu reaches beyond typical grilled burgers and dogs, though those are available and cooked to order.

At lunch on our cruise, we enjoyed fabulous Peruvian whole roasted chicken, cedar planked smoked salmon, and chipotle roasted turkey. The buffet also includes a wide array of chilled salads from around the world, as well as the somewhat hard to locate soft serve ice cream machine, complete with bites and sprinkles to top your bowl. According to sources onboard, plans are in the works for sit-down dinner service at Star Grill, at least on some evenings. On our cruise, dinner buffet has been served once on a long port evening, making it a convenient spot for those who stayed in the city late to grab a bite upon return that didn’t require changing clothes.

Finally, the Veranda/Candles shared space has been refurbished, as well as Amphora, the ship's main dining room.

Other Changes Made to Star Pride During the Refurbishment

The other major changes made to the ship during the construction process included installing 50 new "Star" suites. While this increased the ship's capacity, the new length meant the ship felt as spacious as ever. Two new Owner's Suites were also added mid-ship, both with step-out balconies.

Within the existing rooms, bathrooms were fully rebuilt and refurbished, and all rooms received new mattresses and bedding. Travelers with multiple gadgets will love the USB power outlets that were added to the rooms.

How Guests Onboard Reacted to the Refurbishment

We spoke with one past guest, who was pleasantly surprised that the ship doesn’t feel any different. “There’s a comfort to that,” she said. Others remarked about the luxurious bed linens throughout the suites and the rebuilt spacious double-sink bathrooms.

The newly added suites feature beds near the windows rather than the sitting area. When asked if all the suites will eventually be changed to that floor plan, Prelog said, “No, because it gives our guests an additional choice of cabin layout—especially those who have sailed onboard our yachts in the Wind fleet, where the beds are near the windows.”

Star Grill is a huge hit at lunch and early afternoon following morning port tours and spa bookings have been at a healthy pace. A salon employee told us how excited the crew is to be sailing again. While many are new, there is a strong mix of veterans and newbies at every level. Corporate trainers are also on board this sailing, ensuring Windstar standards are met across all departments.

Shopping With the Chef is Back

After a pause due to COVID protocols, guests across the fleet once again can shop for local seafood and produce where available.

We were able to enjoy shopping in Trapani, Sicily with both the Executive Chef onboard Star Pride, Nilesh Kavande, and Karl Gulotta, Windstar’s Corporate Executive Chef. We first shopped for fish at a market near the docks, looking for the Chef’s Grilled Fish of the Day for Candles Restaurant and larger options for the upcoming Deck Barbecue party. After a bit of price haggling, we left with a selection of seafood that included dorade, squid, octopus, anchovies, tuna steaks, and swordfish (which Chef Gulotta fileted himself.)

Next up, we visited a Sicilian foodie paradise in the form of a tiny father and son shop featuring local cheeses, cold cuts, olives, oils, and spices. The chefs shared sample bites with our group, making it a tasty, educational, and entertaining morning.

Because chefs don’t always know far in advance where arrangements can be made for guests to shop with them, shopping with the chef cannot be booked in advance. Guests simply watch the Daily Program for announcements and sign up, usually a day or two ahead of the scheduled ports. European ports are most likely to offer the option, which is free to Windstar guests where available.

Windstar’s Star Initiative is a success, not only from the point of achieving the line’s goals of upgrading the mechanical systems of the ships, but from the point of view of passengers, who now have more big-ship-style choices --from impressive spa facilities to new food options -- all while maintaining the same Windstar small-ship feel.