You may also like
Dismiss
Holland America Cruise Line History
How to Make Friends on a Cruise
8 Exhilarating Shore Excursions
The Pros and Cons of a Port-Intensive Cruise
Cruise Bookings Up: Lines and Travel Agencies Break Passenger Records
6 Tips For Cruising to Alaska on a Budget
What Kind of All-Inclusive Cruises Can You Find In Alaska -- and Which One Is Right For You?
2022 Alaska Cruises Are Going Strong, But Supply Chain, Employment Issues Remain
Why I'll Never Cruise Without Apple AirTags Again
5 Cruises That Are Cheaper Than a Family Vacation in Orlando 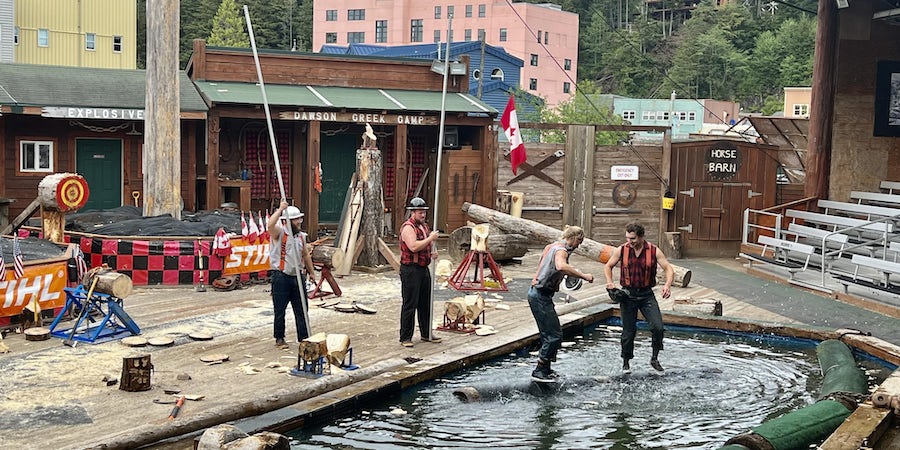 Yo-ho! If you're walking around Ketchikan during your Alaska cruise stop, you'll hear these spirited shouts coming from a pavilion designated as the home of the Great Alaskan Lumberjack Show.

The hour-long show is a staple of cruise line excursion offerings in Alaska; you can also book it on your own. The number of shows and the times depend on when cruise ships are docked in Ketchikan. On busy port days, there are as many as four shows offered.

Are you ready to enter the world of the "timber arts," as the emcee "Lasagna Joe" called the activities? Read on.

The Experience: What is the Great Alaskan Lumberjack Show Like?

First, a caveat: if seeing young men throw around axes and chainsaws with seeming abandon makes you nervous, you will not like this show. I'll admit, I gasped more than once.

But rest assured, it's all fun. We saw the actors/athletes/lumberjacks put on and take off safety equipment throughout the show, unobtrusively so they wouldn't break their macho characters.

We knew the silly factor would be high when Lasagna Joe first entered the arena. He divided the covered seating area into two cheering sections -- one for the American Spruce Mill logging "camp" and the other for the Canadian Dawson Creek "camp." He also gave us the backstory on his role as the camp cook and mediator between the two feuding groups.

What followed was a series of competitive events by the lumberjacks, performed in shirts with the sleeves torn off to better show off their biceps ("OMG, they're strippers," my friend said, as "Will Sunshine," a lumberjack with long blond hair and a Magic Mike vibe entered the ring).

The first event, axe throwing, seemed pretty tame. After all, you can throw an axe yourself in bars around the world. The long saws were a bit more involved, but still kind of boring.

Things escalated when the chainsaws came out. Something about the loud roar of the motor fired up the crowd. Lasagna Joe and the lumberjacks themselves fed on the applause and encouraged the audience to cheer loudly for their team -- and heckle the opposition.

The show climaxed with a log rolling face-off in the venue's pool. "Cotton-Eyed Joe" came over the loudspeaker and the crowd went wild, stomping their feet and clapping their hands. It's ridiculous and you can't help laughing.

After the show, many viewers flocked to take pictures with the lumberjacks. If you go this route, make sure to make a donation to the camp "lager fund."

Our Take: Is the Price of the Great Alaskan Lumberjack Show Worth It?

The Great Alaskan Lumberjack Show was an included option on our Regent Seven Seas Mariner cruise. If you book through the cruise line, the show can range from $40 to $65 for adults and less for children; it's more if you combine it with another activity, such as a crab feast or a trip to the Saxman Totem Village.

If you book direct at the show's website, it costs $37 for adults and $18.50 for children. Infants get in free. Some versions of the show allow you to learn how to throw an axe before or after the actual event.

Excursions and shows in Alaska are more expensive than other cruise destinations. Given that there's not a lot of other entertainment that you can find for less in Ketchikan, we say the price is worth it.

Bottom Line: Should You Do the Great Alaskan Lumberjack Show in Ketchikan?

The show isn't that long and doesn't tax your brain cells; it's a great option if you're staying in town, as opposed to doing a more involved excursion and are looking for something fun for your family (we also think the hunky lumberjacks would appeal to bachelorette parties or groups of friends).

Combine the show with some shopping on Creek Street and a bowl of steaming chowder from the Alaska Fish House next door, and you have yourself a lovely day in Ketchikan.

Curious about other Alaska shore excursions? Check out our review of the Deadliest Catch tour, which gives you some insight into the lives of the Bering Sea fishermen or our port-by-port roundup of some of Alaska's best offerings.