You may also like
Dismiss
5 Best Disney Dream Cruise Tips
10 Reasons to Take a Cruise over a Land Holiday
Disney Cruise vs. Carnival Cruise
Holland America vs. Viking
Disney Cruise Line History
What Is a Soda Package on a Cruise?
5 Reasons Why Families Will Love the Refurbished Norwegian Jewel
10 Cruise Alcohol Hacks for Better Drinking on the Cheap
Carnival Cruise FAQ
Holland America FAQ 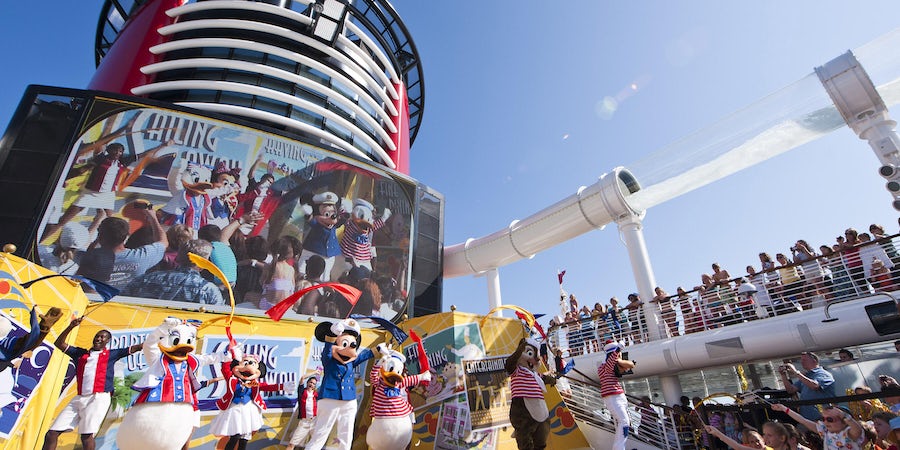 Disney Cruise Prices: What's Included, What's Not and What to Know Before Booking

Are you looking at Disney cruise prices and thinking -- in Mickey Mouse’s voice -- “Oh boy! That’s a lot of money”? While there is inevitable sticker shock when searching their itineraries, the average price of a Disney cruise is a better value than you might initially realize.

While Disney Cruise Line is often grouped in with mainstream brands like Carnival Cruise Line, Norwegian Cruise Line and Royal Caribbean International. But in reality, a Disney voyage should be considered a premium one on par with Celebrity Cruises and Holland America Line, especially considering its excellent service, fine dining and Disney-only exclusives.

What’s Included in a Disney Cruise?

Exactly what’s included in a Disney cruise is part of what makes the higher price tag worth it, though in the end, it's the experience and Disney magic that are the real selling point.

When you’re looking at Disney cruise prices, the base fare includes your room or suite (along with all applicable taxes and port fees), meals (breakfast, lunch and dinner, save for specialty dining), various snacks and ice cream throughout the day, soft drinks at meals and beverage stations, and onboard activities and entertainment extending to Disney character meet-and-greets, first-run and classic Disney film screenings and live Broadway-caliber stage shows.

It’s also worth noting that the bulk of the fleet’s family-friendly cabins go a step further with convenient split bathrooms that make getting ready easier. Expect a toilet and sink in one compartment and a shower/tub combo and sink in the other.

Related: Disney Cruise Deals: How to Snag the Best Bargain for Your Vacation

Beyond these basic inclusions in Disney cruise prices, there are others that differentiate the line as well. Most notably, these include fireworks at sea (available on most sailings), offering “Pirates of the Caribbean” spectaculars in the night sky. Norwegian Cruise Line attempted their own pyrotechnic feats, but has discontinued them

Additionally, the free kids', teens' and tweens' clubs on Disney are more epic than aboard other ships given their immersive storytelling nature and larger spaces (in lieu of the casino you'll usually find on mainstream ships). Similarly, there are themed venues set aside just for adults too, like the Star Wars: Hyperspace Lounge on Disney Wish.

Of course, no Disney experience is complete without a meet-and-greet with Disney's most famous characters. And your Disney cruise prices will include free opportunities on board. While you might have to wait in long lines to snag a picture at Disney's parks, waits are far shorter at sea.

So just what characters are on a Disney cruise? You can always expect The Fab Five -- Mickey Mouse, Minnie Mouse, Goofy, Donald Duck and Pluto -- dressed up in appropriately nautical attire. Casts also often extend to Chip and Dale, Disney's beloved princesses and others.

For fans of Marvel, Pixar and Star Wars, Disney offers respective themed cruises -- Pixar Day at Sea, Marvel Day at Sea and Star Wars Day at Sea -- that showcase the likes of The Incredibles, Mike and Sully, The Avengers, Chewbacca and lots more on deck.

The Bibbidi Bobbidi Boutique features prominently on all Disney ships, though getting transformed into princesses, princes or pirates -- or as well as Captain Minnie Mouse or Captain Mickey Mouse, as introduced on the Wish -- will cost parents or guardians extra.

Disney cruise character dining is also included in prices. Characters make the rounds for mealtimes, but note that the character breakfasts are so popular that you'll need tickets to join (albeit free ones).

Don’t forget Disney's private island, Castaway Cay in the Bahamas. Activities there are available only to Disney cruise guests, and there are numerous options included in Disney cruise prices. Water slides, biking, snorkeling, the family beach and more are all included. Free Castaway Cay food includes a great barbecue spot.

Global super fans of everything Disney will definitely want to swim out into the center of the lagoon with their snorkel gear on to take a peek at the former 20,000 Leagues Under the Sea: Submarine Voyage ride vehicle. This was previously at the Magic Kingdom at Walt Disney World and has been preserved below the water's surface.

Of course, paid extras are also available, including private cabanas at Castaway Cay. Elsewhere on Disney itineraries, you'll find shore excursions in Cozumel, Nassau and Alaska, to name a few. These will all cost ezra as well.

Is Food Included on a Disney Cruise? Yes (Mostly).

Most breakfasts, lunches and dinners, as well as buffet meals, are included in Disney cruise prices. Only alcoholic beverages and the adults-only restaurant collection cost more.

The line distinguishes itself with its rotational dining program, which is included in the price of your Disney cruise. Passengers cycle through three main dining rooms, each with its own theme, while keeping their original dining staff.

Related: Disney Cruise Concierge: Is It Worth It?

One such signature venue is the animation restaurant called Animator's Palate (available on Disney Dream, Fantasy, Magic and Wonder). There, Disney characters -- and sometimes your own drawings -- come to life during the meal.

Another popular venue is Tiana’s Place. Featured exclusively on Wonder, the restaurant is hosted by Princess Tiana herself and meals are accompanied by live New Orleans-style music.

Have an Elsa fan in your family (or are one yourself)? A Disney cruise might just be your best bet to catch the most famous Disney stage shows out there. In fact, Disney's shows and entertainment are probably the most memorable activities on their cruises.

Related: Behind the Scenes with the Imagineers Who Designed Disney Wish

Disney cruise stage shows range from the full “Beauty and the Beast” show to “Frozen, A Musical Spectacular.” Keep in mind that shows on Disney cruises vary from ship to ship, so if there’s one you have your heart set on seeing, make sure you pick the right cruise.

Prices of a Disney Cruise Include Onboard Waterslides and Kids' Clubs

As expected, there’s no shortage of daily activities on board any Disney cruise. Besides the core children’s clubs, the pool deck is another hopping hub. Interactive aqua parks and elaborate water slides enhance any Disney cruise, particularly the AquaDuck water coaster onboard Dream and Fantasy and the line’s first-ever Disney attraction at sea: AquaMouse on Disney Wish.