You may also like
Dismiss
Top 10 Seasonal Cruises for British Cruisers
Cruise Ports Near Me: Your Guide to Cruise Ports You Can Drive To
Best Cruise Ports to Explore by Bicycle
Sail Here, Not There: Avoiding Overtourism in Cruise Ports
50 Years of First Royal Caribbean Cruises
Why There's Still Nothing Like a Day on the Water
Virtual Cruise Trip Report: Onboard a Cruise Critic Member's "Fake, Made Up and Completely Impossible" Cruise Itinerary
Will Cruises to Canada Go Ahead In 2022? Canadian Cruise Ports Are Betting on It
What Is Sustainable Cruising, and Why Should I Care?
Everything Alaska and Canadian Cruisers Need to Know About ArriveCAN 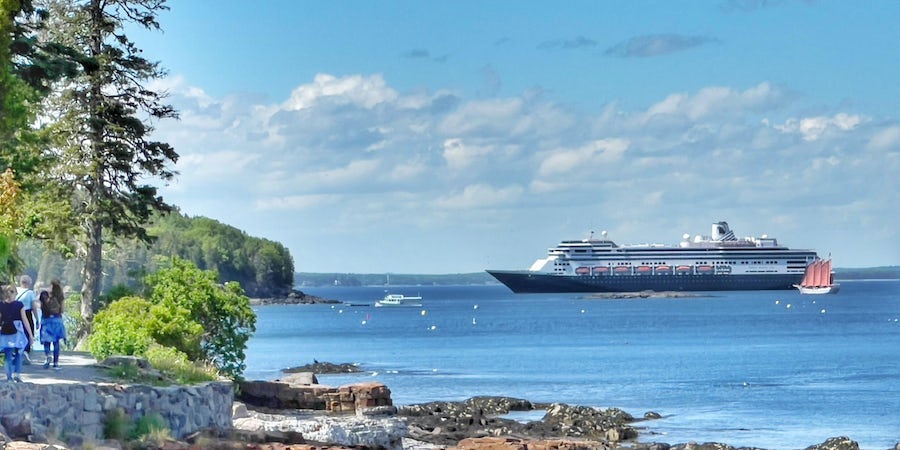 Canada/New England Cruises Shine as Ships Return to Quebec and the Maritimes: Just Back from Holland America Line

The weeklong Montreal-Boston cruise on Holland America Line's Zaandam was dubbed Canada & New England Discovery. But it might well have been called the Pent-up Demand Cruise.

Our itinerary consisted of sailing the St. Lawrence Seaway from Montreal to other Atlantic Canada hotspots, with a jaunt to Bar Harbor, Maine, before disembarking in Boston.

But frankly, to many passengers on the early June sailing, the where of the journey was less important than its mere existence. Some had been sitting on bookings since as far back as 2019. COVID-19 had scuttled their plans, and now, they were just happy to be ascending a gangway and finding their sea legs.

Zaandam isn’t the first vessel to return to Atlantic Canada waters. Viking Octantis sailed to Prince Edward Island in late April, making it the first cruise ship to call in the region in more than two years. Zaandam began regular sailings between Boston and Montreal in late May. The seven-day itinerary continues through June and resumes in September.

Joyce Tracy and three family members had originally scheduled a Caribbean cruise for February 2020. When it was cancelled due to COVID, they considered another island cruise in 2021. It too was cancelled. And so they settled on this Atlantic Canada itinerary, never mind that the route is more popular in fall.

“We had to go somewhere,” said Tracy. “And we didn’t care about the foliage, because we have beautiful foliage (at home) in Iowa.”

Stacey Wong, a business consultant and aspiring “cruise fiend” from Honolulu voiced similar sentiments. He and his wife booked back-to-back cruises on Zaandam, weary of two years of “jumping through COVID hoops.”

“Fall colors are great, but life is now and I’m not going to postpone (a cruise) to see them,” he said.

There were 981 passengers on board our sailing; maximum capacity is 1,432 passengers. Cruise director Ian Page attributed its relative popularity to easy-access embarkation cities and the port-intensive itinerary.

Passengers were required to present a negative COVID-19 test and proof of vaccination before boarding the ship. Masks were encouraged, but not required, and few passengers wore them. The crew, however, was masked, and more than one mentioned they’d been quarantined on board with the illness.

Canada has suspended its mask mandate, but officials require visitors to download the ArriveCAN  app, which asks for proof of vaccination status, among other information. Fully vaccinated visitors no longer need to provide a negative test to enter the country. And, on June 11, Canada did away with random testing in airports for the fully vaccinated.

Zaandam was built in 2000 and the ship is showing its age. Like many ships, it’s been out of service for much of the past two years, but it appears few upgrades were made. Most cabins have just one electrical outlet. The television in my Deck 1 room pre-dated flat screen models and had a built-in VCR, though the video library is a thing of the past.

Zaandam’s sister ship, Volendam, is docked in Rotterdam, where it is temporary home to 1,200 Ukranian refugees. (Passengers were invited to contribute to the cause via a fundraising 5K walk around the Promenade Deck.)

Some complained of a dearth of onboard programming, but with only a single day at sea, most passengers spent their days in port, where the locals seemed delighted by the return of cruising.

In Montreal, the site of a cruise ship in port was still novel enough to compel locals to take aim with their cameras. Montrealers love summer and they love food, so we headed to Atwater Market, a sprawling indoor-outdoor emporium.  On a splendid late spring day, we ordered  lobster rolls from a stand and sat at picnic tables. It put us in view of vendors selling annuals, like hydrangeas with blooms the size of cantaloupes. Inside the market, the array of sausages and pates were so beautifully presented they might even tempt a vegetarian.

In Quebec City, we strolled Rue du Petit Champlain in the city’s lower Old Town. The cobbled pedestrian street below the iconic clifftop Chateau Frontenac hotel, is a fairytale setting lined with small shops marketing locally made clothes, jewelry, cheeses and more. At an outdoor café, we joined a group of Canadians eating poutine – the ultimate Quebecois comfort food of French fries and cheese curds smothered in brown gravy.

“You can feel your arteries shutting down,” quipped one of our tablemates as she polished off the last bite.

At the cruise ship terminal in Prince Edward Island, a banner read “Charlottetown Welcomes you Back!”  After a bus tour to check out the home of the island’s most famous fictional character, Anne of Green Gables, we headed back to the compact capital and made a beeline for Cow’s Ice Cream. Try the Gooey Mooey -- worth every calorie. Upon seeing a sign at a port restaurant advertising an oyster happy hour (77 cents apiece!) we consumed a dozen of the delectable morsels just plucked from local waters, along with a bucket of PEI mussels for good measure.

Baddeck, Cape Breton, in northeastern Nova Scotia, brought us to the shores of Bras d’Or Lake, an idyllic international sailing destination. It’s also the locale of the Alexander Graham Bell National Historic Site. (The inventor had a summer home on nearby Kidston Island that his descendants still visit.)

Halifax’s bustling waterfront beckoned with plenty of spots to loll away an afternoon, including Adirondack chairs and hammocks. The city’s Public Gardens presented a riot of spring blooms. And nearby Peggy’s Cove, famous for its lighthouse and weathered fishing boats, proved to be even more photogenic swaddled in fog than in crisp sunshine.

In Bar Harbor, Maine, we tendered to shore and joined a cycling tour on the carriage roads of Acadia National Park.

“It’s just so nice to see people shaking hands and hugging. And no masks!” declared Bryan Paxton, operations manager at New England Shore Excursions. “It’s good to have you back.”

“Glad to be here,” came the reply.