You may also like
Dismiss
How to Pick a Cruise Line
Solving Cruise Problems: Onboard
17 Best Cruise Books
Green Cruising
British Celebs on Cruises
9 Tips for Staying Safe on a Cruise Shore Tour
Onboard Entertainment UK Style: The 6 Best Cruise Lines
Cruise Classes: 21 Things You Can Learn on Your Next Cruise
Lose Yourself On a Queen Mary 2 Crossing, Through HBO's Let Them All Talk Movie
Exclusive: A Time of Transition as Arnold Donald Prepares to Step Down as Carnival Corp. CEO 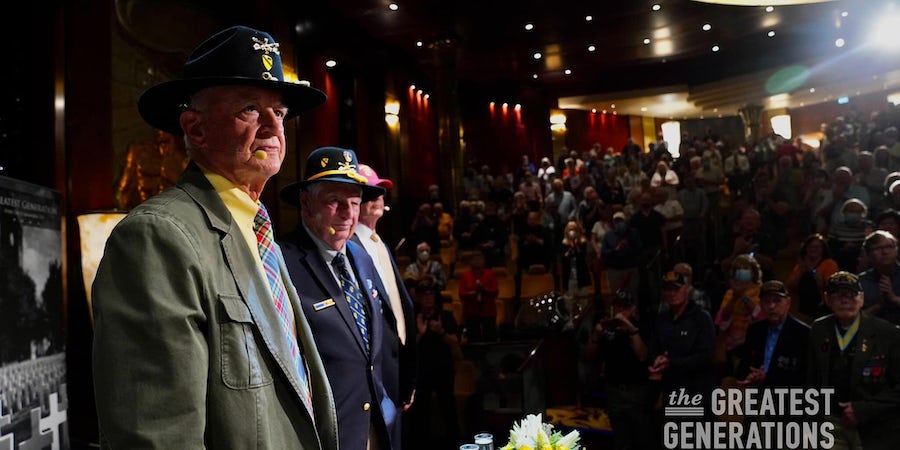 The Greatest Generations Foundation: Just Back From a Cunard Cruise with Veterans

Cunard Line has a history of forging strong partnerships with organizations that fit its commitment to learning and enrichment. Perhaps no partnership better embodies this than the cruise line's association with The Greatest Generations Foundation, a non-governmental, nonprofit organization dedicated to bring closure to veterans by helping them return to their former battlefields and memorials.

Once a year, Cunard hosts American veterans through TGGF on a cruise, putting them onstage and allowing guests to interact with them formally and more socially. For cruise passengers even mildly interested in history or the military, the various lectures and interactions are fascinating.

We sailed on a Greatest Generations crossing on Queen Mary 2 in 2022 with 18 veterans, some of who followed up the cruise with a visit to their former battlefields. Here's what you can expect on a TGGF sailing with Cunard Line.

What is The Greatest Generations Foundation?

The Greatest Generations Foundation is a nonprofit group dedicated to returning veterans from World War II, the Korean War and the Vietnam War to the sites of their battles as well as to the memorials dedicated to those who fought.

It was founded by Timothy Davis, an Australian whose grandfather fought in World War II and passed along his stories to his grandson. When Davis told his grandfather that he was moving to the United States, his grandfather asked him to find one U.S. veteran from WWII and thank him for his service. He did, and soon discovered his passion. Emptying his bank account, he took vets to Europe and Australia. This eventually turned into The Greatest Generations Foundation.

"I know my grandfather is looking down on me," Davis said. "I know he's proud of what I've accomplished."

Davis and his organization have taken veterans to hedgerows in France and valleys in Hanoi, and memorials in Washington, D.C.

Who Will Speak During a TGGF Cruise?

The stars of TGGF cruises are the veterans themselves. Each day, you can attend a formal lecture, either in the ship's main theater, the Royal Court, or the planetarium, Illuminations. Lectures feature the vets, grouped by a commonality. So, one day, a talk might feature three men speaking about their experience in Normandy in WWII. Another lecture might feature two people discussing being prisoners of war.

The final session on our sailing was the piece de resistance, featuring all of the veterans answering questions from the audience.

On our sailing, Denver-based journalist Jeremy Hubbard served as the perfect emcee, effectively steering the conversation, keeping everyone on topic, and speaking reverently and knowledgably about the wars and the veterans talking about them.

Additionally, an urn containing the ashes of 22 World War II veterans, was front and center on the stage for all sessions. The urn was on its way to its permanent home in Normandy, where TGGF purchased a former German headquarters on the backside of Omaha Beach and turned it into a permanent legacy.

What Will TGGF Veterans Talk About?

Topics are set for each lecture, and the veterans loosely stick to those topics. On our sailing, lectures included, "The Longest Day, Normandy"; "Death on Two Fronts", a look at the battles of Iwo Jima and Monte Cassino; "Color of War: Racism and Resistance"; "Prisoner on Two Fronts"; "Breaking the Silence: The Healing of the Vietnam Vet"; and an open Q&A session.

No topic is off-limits. Veterans vividly can recall details of battle, of their friends and fallen soldiers, of their heralded -- or not -- return home.

A big topic was the concept of post-traumatic stress disorder. Veterans, especially those who fought in Vietnam, spoke of their struggles returning home or dealing with "survivor's guilt."

Bill Arcuri, who was taken prisoner and returned home early in the Vietnam War to a hero's welcome, said he felt guilty because subsequent POWs were treated so poorly when they returned.

Bob Jones, another Vietnam veteran from Massachusetts, said he instantly forgot all details about his time in service and put everything about the war out of his mind. He called the work The Greatest Generations Foundation has done "therapeutic."

Guests Will Love Their Interactions with TGGF Veterans

Interaction with the veterans is encouraged outside of the lectures, and you'll have plenty of opportunity as you see them around the ship at meals, in the lounges and even at the dance club.

Veterans love being approached for handshakes and thank you's. (Autograph-seekers on our sailing were common, and lines for a signature were long.)

"It's more gratifying to me ... for you to walk up to me and say thank you," said James Lawrence, a Vietnam veteran from Alabama. "It feels better to an 81-year-old than it would have to a 24-year-old."

It was 102-year-old Steve Melnikoff who closed down the ship's nightclub, G32, every night on our sailing, and dancing throughout the ship was common. Despite their age, the group of veterans tend to be lighthearted and sharp-witted, embracing the "live your best life" philosophy.

Be warned: All lectures are emotional, both for veterans and attendees who will hear vivid first-hand stories that are deeply difficult and touching. Harold Radish, a WWII POW, thanked the audience for being so engaged and calling them "our therapists."

On our sailing, the love was mutual. One passenger, a woman whose father fought as a soldier in the German army, thanked the veterans for liberating them and for accepting her father's white-flag surrender.

Another guest succinctly summed up what we all, perhaps, were thinking: "We're all going forward with a different perspective on life after listening to you all."