You may also like
Dismiss
What's Up Down Under?
Pacific Explorer vs. Pacific Dawn
Princess Cruises History
P&O Cruises History
Cruise Supplies: The Longest Shopping List in Australia
8 Things to Love About Explorer Dream
50 Years of First Royal Caribbean Cruises
9 Reasons to Get Excited About P&O Cruises' Iona
48 Hours in Brisbane Before or After a Cruise 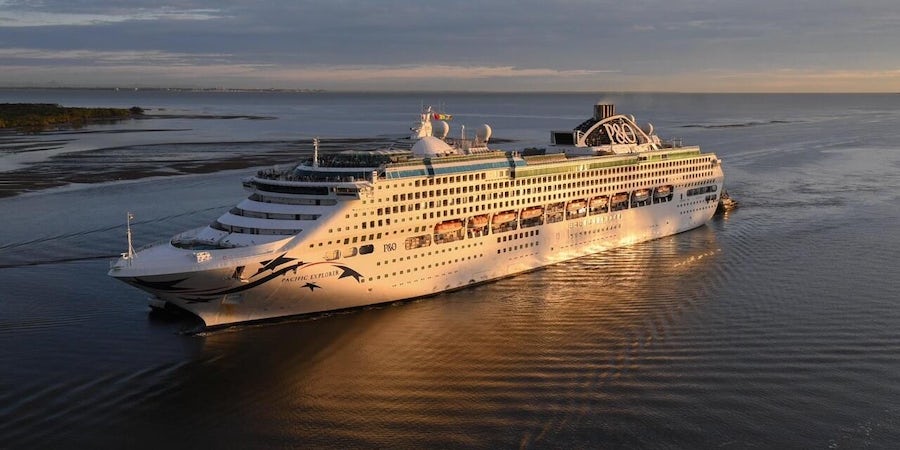 It might be touted Like No Place on Earth, but for the passengers and crew aboard the first return sailing of P&O’s flagship Pacific Explorer, they were back home.

Among the tears and cheers, about 1,500 avid cruisers walked along the gangway to step aboard for the first time in the two years, two months and 15 days since the cruising closed in 2020.

Despite the howling polar winds, spirits were high as Pacific Explorer pulled away from White Bay Cruise Terminal, on its way to christen the never-been-used multimillion dollar Brisbane International Cruise Terminal.

The four-day cruise, which ends in Sydney on 4 June, may be short. But its significance as the first mainstream cruise ship back sailing in Australia is huge, marking the return of the country's annual $5 billion industry.

“In their own way each arrival and departure has been an emotional moment for so many people. I was there when Pacific Explorer arrived in Sydney on April 18 after more than two years,” Ms Fitzgerald said.

“When I saw the crew and their relief, I understood just how significant the restart of cruising is for so many people.

“The departure from Sydney and that signature sail away under the Harbour Bridge was sensational and then to make history with Pacific Explorer becoming the first ship to use the Brisbane International Cruise Terminal.

She added she was delighted that the restart marked an exciting moment for the many suppliers who “longed for the return of our ships as much as we did.”

The 800 crew, many of whom are new to the ship, greeted passengers with warm smiles, eager to show off their ship. While many of the passengers had sailed several times on Pacific Explorer, many of the new features that were installed during a 2020 refurbishment had never been tested.

Formerly Dawn Princess, Pacific Explorer became part of P&O Australia in 2017. When the ship moved over to P&O, it gained the line's first waterpark, with two slides. The ship also has a lawn bowling green and specialty restaurants from two Australian chefs, Luke's from Luke Mangan and 400 Gradi, a pizzeria from Johnny Di Francesco.

Cate and Stephen Runge from Sydney – who have cruised on Pacific Explorer 17 times – were delighted to be back home.

“For us, the love we felt as we rekindled our friendships with crew, was priceless,” Cate said.

“One of our dear friends in the photography department wanted to desperately hug us, but due to covid-safety protocols, we had to settle for a smile.”

The die-hard cruise addicts have five more cruises booked aboard Pacific Explorer. “The crew and ship both look refreshed.”

Nicholas Pyers from Junee, who was one of the 207-strong Cruising With Honey group aboard Pacific Explorer, said he has thoroughly enjoyed working his way through the extensive cocktail.

“Great food, so many cocktails to sample and a fantastic, amazing crew!”

Anne-Marie Andrews from Prestons, NSW - who cruised with her 6-year-old daughter – was impressed by the child-friendly activities.

“She loved the zip line. It was great fun,” Anee-Marie said. “And the new arcade is a fabulous addition to the ship.

“It feels great to be back cruising as it’s the best way to relax, experience new places and make new friends.”

Nathan Cambey, who cruised with his partner Tom and mother Narelle said it was “amazing to walk through the gangway.”

Captain and Officers Have Emotional Response to Australia's Cruising Return

As the last captain on the last cruise before the cruise ban, Captain Lorenzo Paoletti was back at the helm for the first cruise.

“I have sailed out of Sydney Harbour many times, but 31 May was unforgettable,” Captain Paoletti.

“We sounded Pacific Explorer’s ‘whistle’ as we passed under the Sydney Harbour Bridge and I could hear the cheering as guests celebrated a great day in history.

“I was very happy for them and for my crew who come from 34 different nations.”

Newly appointed Cruise Director Julie McEwen, a favourite among loyal passengers said one of the nicest things about the first sailing was seeing so many P&O supporters.

“Having guests on board again is such a great thrill. It feels like we are reinventing cruising together and discovering that it still as much fun as ever,” Ms McEwen said.

“It is like having family back onboard Pacific Explorer. Everyone knew they were doing something special. It feels like we were on the road to a very happy place.”

The next ship set to return in the P&O Australia fleet is Pacific Encounter, coming on 27 August, followed by Pacific Adventure on 22 October.

For the last two years, the Brisbane International Cruise Terminal has stood idle, waiting for the cruise ban to end. And, on 2 June, the multimillion-dollar terminal was finally able to to welcome ships and passengers.

History was made as Pacific Explorer became the first cruise ship to berth at the state-of-the-art Brisbane International Cruise Terminal.

Passengers were given commemorative T-shirts to wear on the momentous occasion.

After a moving welcome to country and smoking ceremony, P&O Cruises Australia President Marguerite Fitzgerald said Queensland was once again set to be a key market for cruising in Australia.

“Today’s arrival in Brisbane heralds the resurgence of the cruise industry in Queensland with its multitude of cruise destinations now set to benefit from the revitalisation of cruise tourism” Fitzgerald said.

Queensland premier Annastacia Palaszczuk officially opened the terminal, acknowledged the passengers on the “first cruise back”.

“Today is a great day, welcome to Brisbane, our Olympic City 2032. And can I say up front, cruising is back!” Palaszczuk said.

“I know that’s going to give a lot of hope to many people right across the country.

“This is a billion-dollar industry for Queensland.”