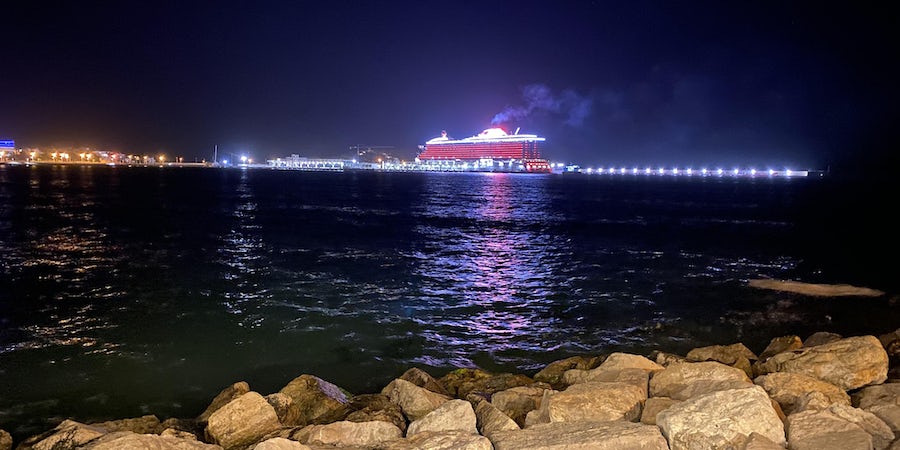 Virgin Voyages makes a point of being different from other cruise lines, be that in its terminology (sailors vs. passengers, voyage rather than cruise), entertainment onboard (sex shows, drag queens) or dining options (vegetarian forward, the first Korean BBQ at sea, all-inclusive).

But what does the line offer on land, with its "Shore Things" (translation: shore excursions)? Are they different from the standard cruise ship offering? Do they push the boundaries when it comes to experiences and entertainment?

We've already checked out sister ship Scarlet Lady’s Shore Things in The Bahamas and were not overly impressed.

So we got onboard the line's second ship, Valiant Lady, for its "MerMaiden" voyage from Barcelona to find out.

Night one and I find myself in the Red Room onboard Valiant Lady attending a Virgin Voyages signature show "Untitled Dancepartything".

The inhouse performers are in neon-glowing outfits with glow sticks standing on podiums urging us to follow them dance to ... er ... the Macarena? Then form a conga line for "Love Train" ...

It's great fun of course, and very liberating, but it's also familiar.

And thats the clever aspect of a Virgin Voyages cruise -- you'll find a lot of events and shows described in certain ways, but when you cut through the verbiage, you get a fun, interactive disco.

I emphasise that this does not apply to every aspect of the Virgin Voyages experience. Cocktails and Revelry with the Diva (the magnificently titled Titi Kaka), was a drag show unlike anything I've seen on sea or land. And Never Sleep Alone, a show about sex (rather than a sex show), pushes the boundaries of cruise ship entertainment probably as far as they can (or should) go.

But unlike last year, when I was stuck going up and down the English Channel, I was keen to find out how Virgin differed on land.

Here's how we got on.

Pasta Making in Tuscany -- Is Virgin Voyages Offering 'Sailors' Anything New or Groundbreaking?

After a 90-minute journey from the uninspiring port of Marina de Carrera, home of the famous marble, we find ourselves in the heart of the Tuscan countryside at a farm called Fattoria Vialto.

It's a stunning spot -- rolling fields, low hills, olive groves and a small village perched atop a neighboring hill. It would be hard to find a more perfect Italian setting.

But it's also oddly familiar. I scroll through my photos on my phone to a cruise I took with Princess Cruises in 2018. The farmhouse looks similar and the experience "A Taste of Tuscany" sounds exactly the same. It's a different place, but the similarities are striking.

There's some confusion about who's doing what due to app issues; I assume I'm here to learn how to make pasta, but it becomes clear quickly that there are too many of us to do that, despite the large dining and kitchen area.

Instead, we are set to work (or rather we offer); slicing tomatoes and zucchini and chopping up sausages under the guidance of the head cook (not chef, he insists).

It's not exactly what I had booked, but no matter, I throw myself into peeling, chopping and slicing, and soon our meals are ready, with copious amounts of wine -- at 10:30 in the morning.

As we sit down to eat, a group of people emerges from the nearby woods.

"What have you been doing?" I ask.

"Well the dog did it really, we just had a nice walk in the woods."

Then another group emerges, on a slight variation of this tour. It turns out that everyone who had booked on anything connected with food, wine or cooking ended up here in Fattoria Vialto.

It's an hour and a half back to the ship, and although this is not any different from and food and wine-related shore excursion any of us have done before, it was a lovely morning in a gorgeous setting, and after all that wine, definitely time for a siesta, or whatever the Italian equivalent of that is.

Snorkeling in Ajaccio -- Can Virgin Voyages Put a Unique Spin on a Standard Shore Excursion?

I sign up for a snorkeling adventure in the vast bay of Ajaccio, Corsica. It’s not overly subscribed, around 10 of us. Other people have opted for a cycling tour, a visit to Napoleon’s monument, a town tour and another food and wine excursion.

It was recommended as something different, but it’s not: I have done many of these snorkeling tours on other ships around the world and to be fair, it’s hard to see how Virgin Voyages could put a unique-Virgin twist on it (perhaps an underwater course on how to get the best selfie or Make Your GoPro Shots Insta-Ready! -- could be a possibility).

Again, it’s a stunning setting as we make our way out to a protected marine reserve, snorkel for half an hour or so in crystal clear waters then make our way back in the ship in time for lunch.

Thursday night is Scarlet Night onboard Valiant Lady. From 6 p.m. on, every venue along the main entertainment decks turns red, in preparation for what's billed as a "fully immersive celebration" at sea, followed by the fabled Las Vegas-style pool party.

And this doesn't fail to disappoint. There's a DJ set up at The Roundabout (the main atrium), pop-up entertainment all along Deck 7 -- from the Dock House to Sip, the Champagne bar's glowing red octopus tentacles (the unofficial Virgin mascot), climbing out of seats, and then from 9 p.m., the fabled pool party -- which does live up to the hype.

The entertainment team head up to the top deck in all manner of outfits (mainly very little) and dance on, around and in the pool as we look on -- until, that is, the first of us is dragged in.

Most people dance in the shallow end, but a few jump into the pool. I couldn't help but compare how on most ships, after around 6 p.m. the pool crew pull those stringy nets over the pools and sometimes drain them for the night.

The very fact that Valiant Lady comes to Ibiza and stays overnight is different in itself. While a handful of lines visit Ibiza -- MSC Cruises, Marella Cruises and Costa to name three -- no other line stays overnight. So kudos to Virgin for that.

Onboard, it's party time as DJs set up their decks to get us in the mood for a night on the White Isle.

Within a few hours of docking, the ship is largely empty (not surprising after a day at sea), with most passengers eating in the dozens of outdoor restaurants that line the old harbour front, moving on to bars tucked away down the maze-like whitewashed streets.

I jump on one of the free shuttle buses that leave every 10 or 15 minutes from the cruise terminal. Ten minutes later I’m checking out the tapas bars myself.

In the long line of bars and restaurants, everything is open-air with chic white sofas and armchairs under trees strung with rattan-shaded lights or garden umbrellas hung with heaters.

By midnight it's close to decision time. I'm thinking: Who needs an over-priced Ibiza disco when we've been raving onboard all week at The Manor -- a nightclub inspired by Richard Branson's first music studio; joined in the DanceShowPartyThing and danced in the pool's paddling area during the awesome Scarlet Night Pool Party.

Also, I'm booked on to Valiant Lady's Ibiza Beach Club Experience the next day at Santa Eularia des Riu, 9 miles north, and as I don't want to waste the day just sleeping I get back to the ship just before 1 a.m.

The very fact that you can stay out -- partying all night -- should you wish to, is what stands Valiant Lady's calls to Ibiza apart from every other line sailing in the Med.

But to make it truly a Virgin experience, how about, for example, Titi Kaka leading a select group of sailors on a drag bar crawl? Now that's something we'd definitely sign up for.

I made the right choice to catch one of the last shuttles back to the ship when I did because the following morning I was delighted to be sitting in a plush Mercedes mini-bus that takes eight of us to the beach.

Our guide tells us about Ibiza Town's famed Pacha nightclub, which was just a typical whitewashed villa when it opened in 1974.

It's still a low-level white building but much bigger and partly hidden behind palm trees. Although its iconic cherries logo and velvet ropes announce the grand entrance.

Arriving just as Chiringuito Blue, a waterfront restaurant with its own section of golden sand, is opening, a little after 11 a.m., we’re soon settled into pairs of wooden loungers with thick foam mattresses covered in white cotton covers.

We're swiftly presented with large white beach towels, bottles of San Pellegrino and Vilas mineral water with tall tumblers of ice and lemon slices. So we help ourselves then sit back listening to the rhythm of gentle waves, barely 30 feet away.

We're led to the gorgeous beachside restaurant for lunch, an outdoor space with chic sand-coloured fabric stretched out overhead and rippling in the breeze.

The music is louder and we have to speak up to hear our conversation but, as one of the others says, the music wasn't crazy and at least we know some of the songs.

There’s no dancing, though, and I have a salad nicoise with just-cooked tuna for 25 euros, and the lovely waitress brings mineral water and warm flatbreads with a light mayonnaise dip.

The food is delicious, the beach is sandy, the sea is sparkling and Chiringuito Blue is stylishly tasteful. But is it the full Ibiza beach club experience? Not necessarily.

Friends on the ship have taken a taxi to superclub Ushuaia Ibiza’s hotel for its Unexpected Breakfast, described as a gastronomic experience of "magic, music, hedonism, freedom and fun."

The 250 euro ($264) Ushuaia brunch includes unlimited drinks as well as an enormous choice of food plus loungers on the beach. Our Valiant Lady excursion cost 150 euros ($158) and included transport and a bottle of water.

But here’s the thing: We really enjoyed swimming in the sea and drying off in the sun, with the music loud enough to hear but not so much we couldn’t read or enjoy a nap.

And the others? They loved their Champagne breakfast and the celebrity atmosphere, but the non-stop music drove them back to the ship by early afternoon. At 4 p.m., as we were leaving, the youngest member of our group noted sadly that the music was “just getting going”.

He was right, of course, but the rest of us were focused on getting back onboard Valiant Lady, which channels all of the hedonistic fun of Ibiza’s party-hard club scene, but at a fraction of the island’s prices.