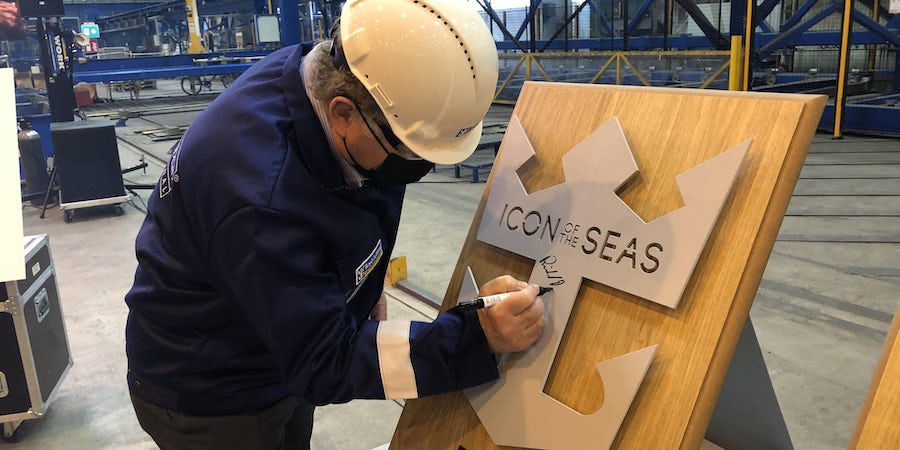 What's the Large Sphere on Royal Caribbean's Icon of the Seas? Released Video Gives Some Clues

What comes next after Wonder of the Seas? For Royal Caribbean, it's a brand-new class of ship -- Icon of the Seas -- which is already well underway at the Finnish shipyard Meyer Turku.

But what's driving questions from cruisers ready to sail is, what is the mysterious sphere that's part of the new ship's design?

A video released by Royal Caribbean outlines construction of the 175-metric ton sphere. The orb is 46 feet tall and 50 feet in diameter.

Other details released about the orb are that it has air conditioning ducts and lighting. But little else, including what the sphere will be used for, has been revealed.

Michael Bayley, president and CEO, Royal Caribbean International, has kept relatively mum about the new class of ship. "Five years ago, we began dreaming of Icon of the Seas, and now the next phase of this iconic adventure is beginning," he said during the ship's keel laying and coin ceremony last month.

"As this game-changing ship takes shape, the excitement from families and travelers alike, travel advisors and our partners continues to build. Later this year, we’ll reveal the lineup of firsts and favorites that will set a new standard for vacations come fall 2023."

The laying of the keel and coin ceremony are long-standing maritime traditions and mark the official first steps in the construction of the ship.

The occasion saw a massive steel block placed into the new ship’s building dock on top of freshly minted coins. The coins are meant to bring luck during construction, and they will be retrieved and given to Icon’s captain and crew before setting sail.

Cruise Critic members are keeping tabs on Icon of the Seas' progress in an ongoing thread on the Royal Caribbean message board. Join in the sphere speculation there.