You may also like
Dismiss
Things to Do in Vancouver Before a Cruise
Things to Do in Anchorage Before a Cruise
Alaska on a Budget: Cheap and Free Things to Do in Port
5 Reasons to Love Windstar in Alaska
Fall Foliage: Canada Cruise Ports to Visit This Autumn
Denali Princess Wilderness Lodge
5 Reasons to Love Seabourn Cruises in Alaska
6 Best Cruise Ports for Hiking in the Caribbean
Booked on a Cruise to Alaska? You Might Notice Some New Features in Port
What's New for the 2022 Alaska Cruise Season? 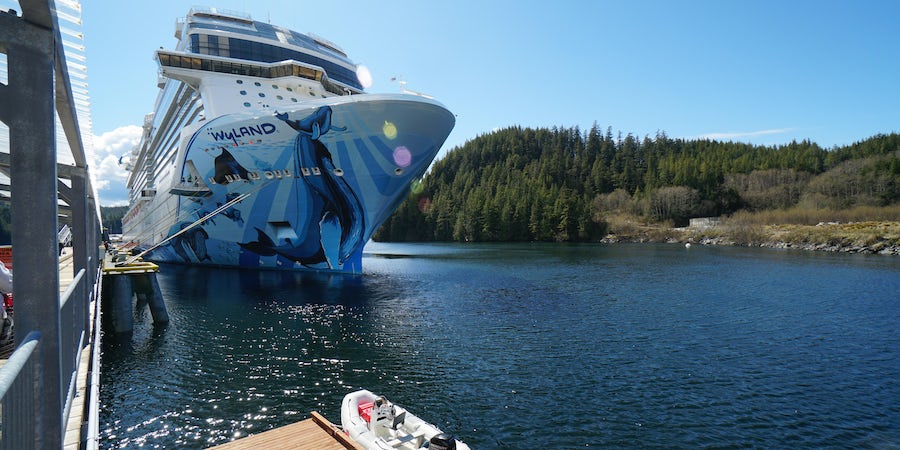 Just Back from Ward Cove: What You Need to Know About Alaska’s Newest Cruise Port

The vast, untouched expanses of the Tongass National Forest, Indigenous history and charming streets make the Southeast Alaskan fishing town of Ketchikan a much-loved port of call on any Alaska cruise.

But if your Alaska cruise includes a stop in Ketchikan, there’s a chance that you will berth at nearby Ward Cove instead, some seven miles north of Ketchikan's bustling downtown.

Since Ward Cove opened in 2021, reviews from cruisers have been mixed. Those intent on spending their day in Ketchikan soaking up the atmosphere in town -- and those who are focused on nature or cultural shore excursions -- may very well have different experiences. Though, as the months go by, Ward Cove is moving closer and closer to providing its own reasons for lingering there.

Cruise Critic was on board Norwegian Bliss in late April and was the first mainstream cruise to visit Ward Cove and Ketchikan for the 2022 Alaska cruise season. We spoke with John Binkley, President of the Mill at Ward Cove, and Jennifer Black, Vice President of Strategic Development of the Mill at Ward Cove. Both discussed their future plans for the port with Cruise Critic, as well as what to expect if your Alaska cruise calls on Ward Cove.

First things first: Ward Cove is surrounded by nature (if you look beyond the still-industrial port itself, crafted out of the remains of a long-shuttered pulp mill). To the south, Ward Creek opens to the channels of the Inside Passage while forested karst mountains of Tongass National Forest rise all around. The port owns 200 acres of property abutting the forest, putting Alaska's wild side, quite literally, just across the street.

In addition to standard tours that whisk passengers into Ketchikan, numerous shore excursions at Ward Cove reflect the port's proximity to the wilderness, including rainforest nature walks, canoeing, kayaking in the straits of the Inside Passage, and more.

One of the highlights of a half-day at Ward Cove is the e-bike journey through privately owned forests to Connell Lake, on the official border with the Tongass National Forest public lands. Along the way, guides will stop and explain some of the plants, as well as features like wetlands that help preserve the ecosystem. Once you've reached the lake, Ward Cove guides prepare a campfire to roast s'mores and sip on coffee or hot chocolate.

"We continue to train seasonal guides on the Tongass National Forest, the flora and fauna, as well as the history of the Pulp Mill," Black said. However, the goal of Ward Cove is to extend that knowledge to the entire guide team, who rotate between shore excursions in Ward Cove. "We believe that basic knowledge is relevant on any activity," she continued. "Whether it’s sea cycling, biking or a nature walk"

Ward Cove can be an excellent jumping-off point for outdoor and more adventurous shore excursions. However, around half of the passengers on any cruise head into Ketchikan proper, according to Binkley. And while that does keep some vehicular traffic from clogging the streets of the small city, the port downtown can still host up to four ships at a time, in addition to the two newer berths at Ward Cove. The short calls at Ward Cove and Ketchikan that some lines place on their itineraries also make maximizing your port day a bit hectic.

Some passengers were able to do this successfully, like Marlena Tungate and Ernie Hernandez III of Los Angeles. The young couple celebrated their honeymoon on the first Alaska cruise of the season (which was also their first cruise ever).

"We took the first bus into town at 7:30, then came back out for the tour," Tungate told Cruise Critic. While their time in Ketchikan was short, they noted that the bus system -- previously the ire of many Alaska cruise passengers in Ward Cove -- worked efficiently, with Norwegian Bliss the only ship in port at nearly 60% capacity. “By docking seven miles to the north, we also believe over time it will reduce congestion in downtown Ketchikan,” Black told Cruise Critic.

Additionally, shore excursions to Totem Bight State Park, the Great Alaskan Lumberjack Show, and the Bering Sea Crab Fisherman's Tour (also known as the "Deadliest Catch" Fisherman's Tour) are all still major draws for those coming ashore in Ward Cove. All of these options involve transport, and even the e-bike tour -- essentially just across the road from the port -- involved a shuttle van. We didn't spot electric vehicles as transit options during our April 2022 visit.

Ward Cove is still in the early phases of its development, though, and the team is hoping to further burnish their eco-friendly credentials in the future.

Ward Cove is also planning to take Norwegian Cruise Line's shoreside power initiatives to an even greener level. "We are working towards an electric future here at Ward Cove, completely with renewable hydroelectric sources," Black revealed. "One of our next big projects is securing enough hydro power to allow ships at dock in Ward Cove, to shut down their engines and plug into shoreside hydro power."

Ward Cove: What to Expect When You're in Port

Ward Cove was officially inaugurated in August 2021, but is still very much in its early phases of development. Most of the port itself is an active construction site, with machinery digging and hauling away remnants of Ward Cove's previous industries. But the initial sketches of Ward Cove's future are starting to appear.

"We are beginning to tell the history of the logging industry in Southeast Alaska and the importance of the Ketchikan Pulp Mill to this area," Jennifer Black told Cruise Critic.

That refurbished pulp mill is the port's shiny new hub: accessible concrete paths lead inside the towering hall inside, where repurposed rail cars imported from British Columbia add to the reclaimed aesthetic of the port. Inside, you'll find a sprawling gift shop, simple snack stand, restrooms and guides for most shore excursions in the Ketchikan area. Buses are parked outside, making the 20- to 30-minute journey into Ketchikan proper.

Ward Cove has made the day smoother for those who want to spend their time in Ketchikan. Buses to Ketchikan initially cost extra, though outcry from passengers changed that policy.

Those on short half-day port calls will need to get up early, however: shuttles into Ketchikan currently only depart until 9:30 a.m. or so on these short stays, with return times around 11:30 a.m. from Ketchikan back to Ward Cove. .

While most passengers had no problems meeting the bus times, missing a return coach to the ship will have a tough time finding a taxi in Ketchikan -- and those that are around will charge handsomely for the ride back to Ward Cove.

As the months and years roll by, passengers are likely to see more amenities and features come to the Ward Cove area, which officials are eager to make a destination in its own right.

"As we develop more activities at The Mill there will be less urgency to leave the property where guests will be able to dine, shop, and explore on their own," Black told Cruise Critic. “The vision is to provide guests more opportunities to explore, learn and relax. Pristine wilderness is one of Alaska’s strongest assets."